The wonderful Tuesday tradition of boot spotting continues, with a round of spots, as fresh as morning dew and they come in the wake of a weekend, that was dominated by the Vapor IX. All around Europe it got its official début, but we did also manage to fit in a couple of very special custom boots from the far corner of the world, as well as, a pair of Nike GS2. 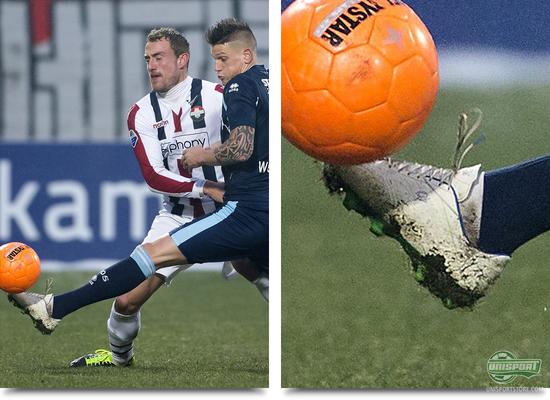 Ruud van der Rijt (Willem II)  Pelé Sports Galileo White/Blue/Green We start off in Holland, where we really had to put on our thinking caps, to figure out what the gentleman in blue above was wearing. The opinions were many and it was a serious challenge naming the boot, until it struck us, that it couldn't be anything other than a Pelé Sports Galileo White/Blue/Green. It is the takedown-model of the Trinity 3E SL, which makes it a very strange choice for a professional player indeed. 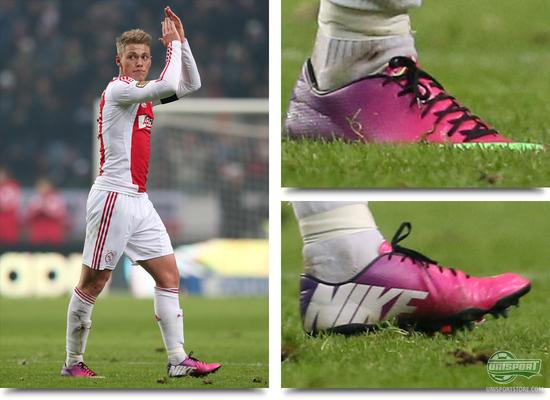 Viktor Fischer (Ajax)  Nike Mercurial Vapor IX ACC Fireberry/Electric Green/Red Plum In the Eresdivision, one of Denmarks, if not the worlds, most promising talents applies his trade and is scoring goals galore. The just 18 year old Dane once again captured the headlines, as he netted twice in the local derby against Feynoord. He did so in the new Vapor IX Fireberry/Electric Green/Red Plum, which left us wondering why he wasn't wearing the Sunset/Volt/Total Crimson, that was made specifically for young up and coming talents. We can also note, that his team mates Christian Eriksen and Lasse Schöne also played in the same colourway, so maybe it's a Danish trend? 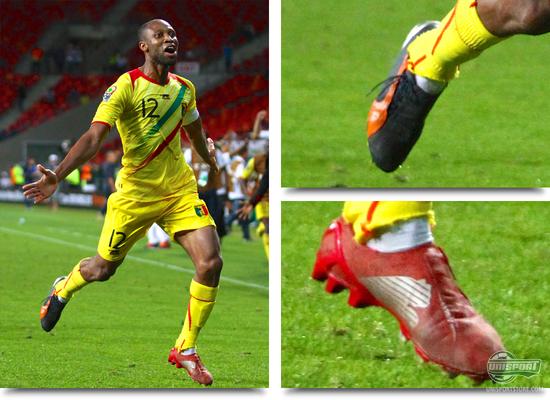 Seydou Keita (Mali)  Puma v1.06 Red/White and Orange/Black We have, on other occasions, seen players like Benoit Assou-Ekotto and Djibril Cissé with different colourways on their feet and it looks like they have been joined by the Malian star Seydou Keita. He has, for a long time, kept a hold of his Puma v1.06-boots, and he is still going strong in them in the African Cup of Nations. Keita had mixed his boots across colourways and jumped in pair of Black/Orange and Red/White Puma v1.06. Cadeau to Keita, who like us, loves the thin, light boot. Furthermore, he managed to score with it, so you would think he would choose them again. 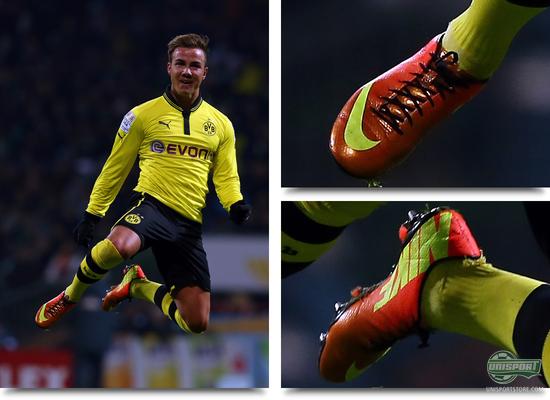 Mario Götze (Dortmund)  Nike Mercurial Vapor IX ACC Sunset/Volt/Total Crimson The German prodigy has gotten off to a flying start in 2013 and this weekend he contributed to the absolute demolition of Werder Bremen, who left the pitch with a 5-0 slap. He therefore gave his new Vapor IX Sunset/Volt/Total Crimson a début goal and on top of that he, unlike the three Danes at Ajax, respected the planned distribution of colourways to players. 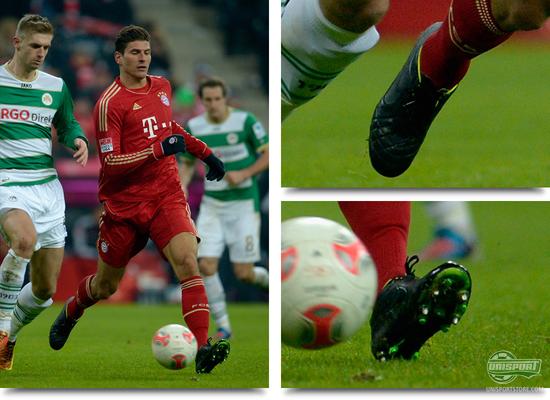 Mario Gomez (Bayern Munich)  Nike Tiempo Legend IV ACC Black/White/Electric Green Blakout At the head of the pack in the German Bundesliga, we find Bayern Munich, who can attribute many of their goals to a certain Mario, but in this weekend it actually wasn't Gomez who got his name on the score sheet  but rather Mario Mandzukic. The first mentioned was however on the pitch and really put fuel on the fire, about a possible boot change, as he gave his Puma EvoSpeed 1 White/Silver a rest and wore his new blackoutted Nike Tiempo Legend IV ACC Black/White/Electric Green. This really is a massive shock to everyone, especially seeing as though Gomez had only just gotten his own personal colourway from Puma. - The Germans down in Herzogenaurach must really be scratching their heads, over what made Mario change. 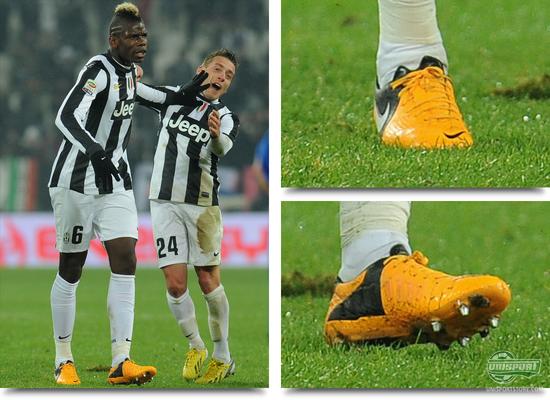 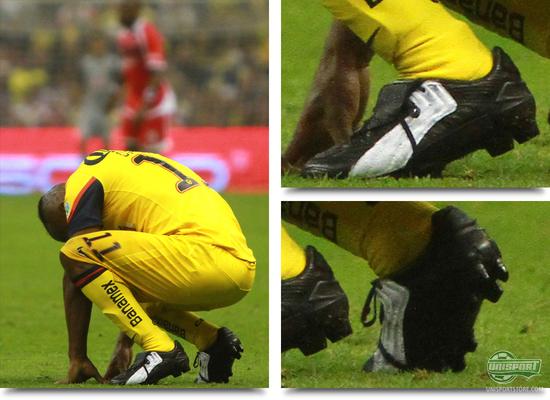 Christian Benitez (Club América)  Adidas Predator Absolute Custom It always brings a tear of joy to our eye, when we spot a pair of older Predator-boots and this time was far from an exception. The Mexican league always delivers on the boot spot front and this week was no exception, as Christian Benitez sported a pair of the good old Adidas Predator Absolute. He has however done quite a lot to disguise them, with a stitched on logo, that we can't recognise. It takes more to cheat our sharp eyes Mr. Benitez, with the heel-counter and studs giving him away. Sublime choice of boot none the less. 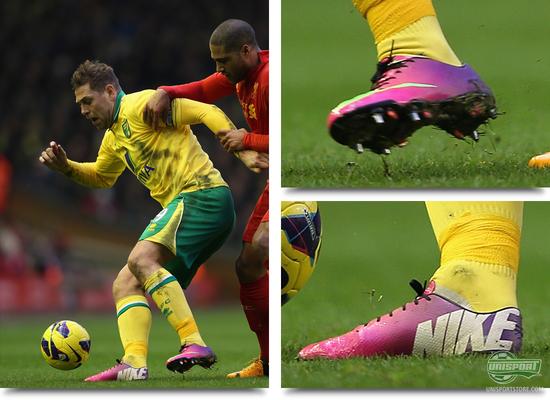 Grant Holt (Norwich)  Nike Mercurial Vapor IX Fireberry/Electric Green/Red Plum We return back to Europe now and more specifically Merseyside, Anfield. Where the Canaries from Norwich were visiting. Grant Holt has, in the last couple of years, been an avid Nike Tiempo Legend-user, but the new Vapor IX, looks to have had too much allure to withstand. He has changed into the Fireberry/Electric Green/Red Plum colourway, but that hardly made a difference as they were comprehensively beaten 5-0. 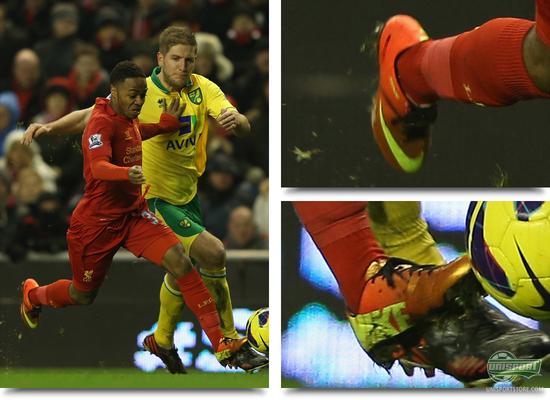 Raheem Sterling (Liverpool)  Nike Mercurial Vapor IX ACC Sunset/Volt/Total Crimson The lightning quick winger might not have seen too many summers, but this hasn't stopped his rocket accent into the starting line-up at Liverpool. Sterling is seeing plenty of action for the first team and the super talent has not gone unnoticed by Nike, who have secured the signing of the Englishman. He has therefore been planted firmly in the American boot and this weekend he deputised his new Vapor IX Sunset/Volt/Total Crimson, who also provided the cross that ended in an own goal. 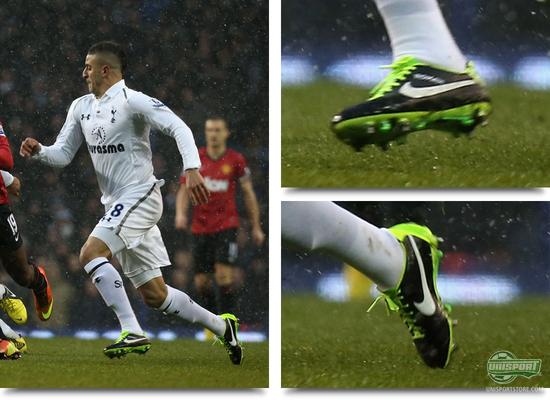 Kyle Walker (Tottenham)  Nike Tiempo Legend IV ACC Black/White/Electric Green The former Umbro man has recently terminated his sponsorship deal with the English brand and proclaimed that he would now be a Nike T90 Laser IV player. This held true in the beginning of his Nike career, but now it looks like, that he has been tempted by the softness of kangaroo leather. In the game against Manchester United he was in any case wearing a pair of Nike Tiempo Legend IV ACC Black/White/Electric Green, but what the future holds, only time will tell. 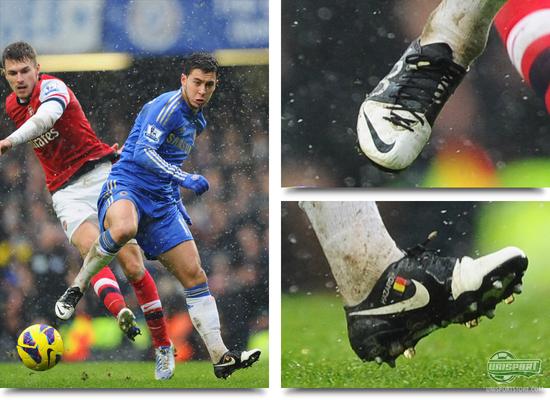 Eden Hazard (Chelsea)  Nike GS2 ACC White/Black The American brand Nike, can boast about having an incredible number of Europe's best players on contract, and the Belgian mega talent here is no exception. He was part of the exclusive #GS2SQUAD with Christian Eriksen and formerly mentioned Sterling, among others, who were allowed to play in the concept boot. While his #GS2SQUAD team mates only played in it sporadically and have already moved on to the Vapor IX, Hazard has kept loyal to his pair, which it seems he has grown quite fond of. 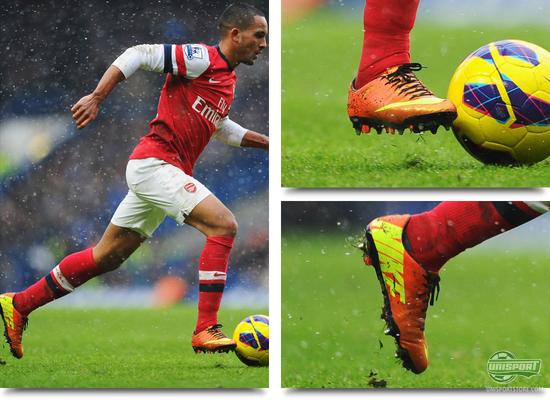 Theo Walcott (Arsenal)  Nike Mercurial Vapor IX Sunset/Volt/Total Crimson It has been a nerve-wracking time for Arsenal fans, who have been feverishly biting their nails, waiting to hear any news about their biggest star, Theo Walcott, and his ongoing contract negotiations. Before the game against Chelsea, the news finally filtered through and all Gunners around the world could breathe a big sigh of relief. He celebrated the good news with a goal against Chelsea, who ran out 2-1 winners regardless. Walcott was still Arsenals best player by a margain and was so in the new Nike Mercurial Vapor IX Sunset/Volt/Total Crimson. 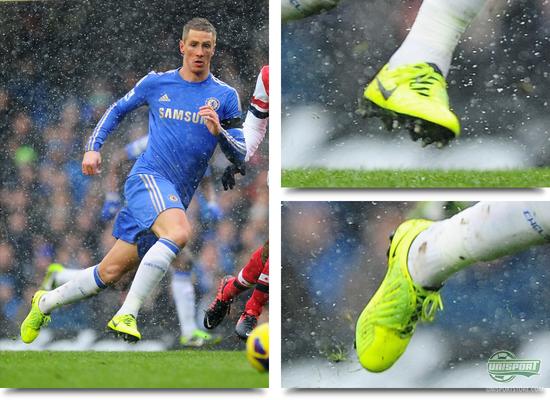 Fernando Torres (Chelsea)  Nike T90 Laser IV ACC Volt/Black/Citron The Spanish striker is generally not a fan of very flashy boots and has on another occasion also declared his undying love for white boots. We were therefore extremely surprised when he had changed out his T90 Laser IV Clash White/Green, with the brand new T90 Laser IV ACC Volt/Black/Citron. The new boots didn't bring him any goals, but that's hardly news, some less sympathetic folk might say. 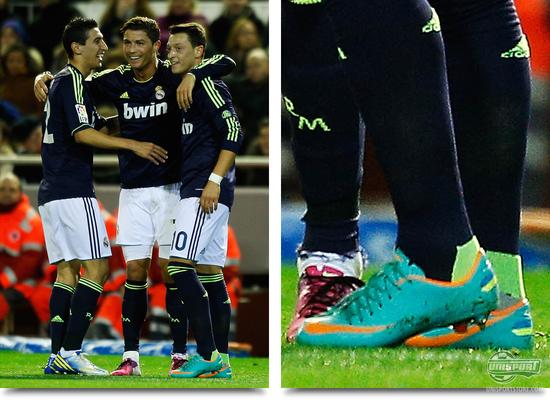 Mesut Özil (Real Madrid)  Nike Mercurial Vapor VIII ACC Retro/Total Orange/Challenge Red Not everyone has taken to the new Vapor IX and among them is the German Mesut Özil, who has drawn quite a lot of attention to himself with his boot choices. Özil has been training in the new Vapor IX Fireberry/Electric Green/Red Plum, but it would seem they haven't been broken in completely, as he continued in the previous generation in their game against Valencia. We will keep our eyes firmly on him, as a change to Adidas has been on the cards before. 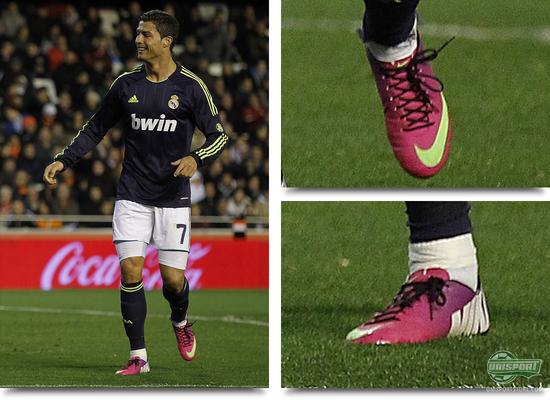 Cristiano Ronaldo (Real Madrid)  Nike Mercurial Vapor IX ACC Fireberry/Electric Green/Red Plum The Mercurial-man above all has been an unstoppable force in the beginning of 2013 and in yesterdays late game in the La Liga, he made the net bulge twice and set up another. He did so in a pair of Vapor IX Fireberry/Electric Green/Red, but when we zoomed closely in on his boot, it would appear that there is no Speed Control on it. It may be the pictures angle that is deceiving, but let us know what you think down below.

A big round of boot spots, where we have been around the world and managed to spot a thing or two. What did you think about this weeks boot spots? Have we missed anything? Tell us your opinion in the box down below.