Now there is no more football to be squeezed out of the 2012/13-season and we have to instead start looking forward to the Confederations Cup in Brazil. We have however one last round of boot spots to get around, where there was also a début for the Nike Hypervenom and a few legends in action too. 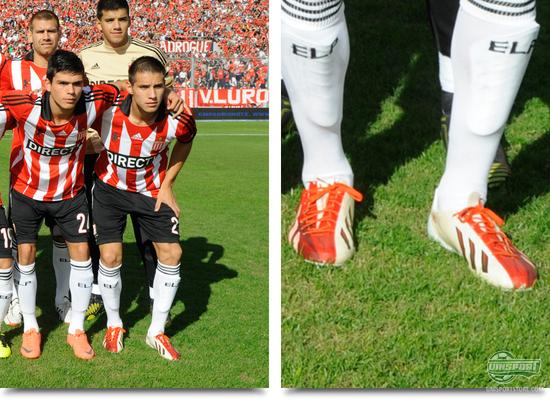 Carlos Auzqui (Estudiantes)  Adidas F50 Adizero Messi Red/White It is probably the intention, when Adidas design a new signature boot that it is just the player in question, who gets to play with them. This is however not always the way it goes. In Argentina we spotted Carlos Auzqui in a pair of Adidas F50 Adizero Red/White Messi, which as the name implies, is designed for the FC Barcelona wizard. We do however have to concede that it looks incredibly good paired with the Estudiantes kit. 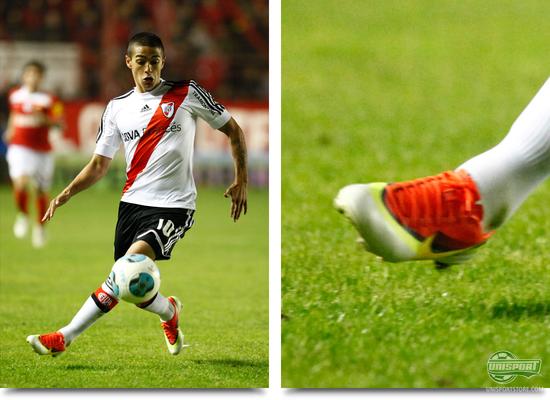 Manuel Lanzini (River Plate)  Nike Mercurial Vapor IX ACC CR7 These days you can't say Messi without saying Ronaldo and today is no exception. Again we are in Argentina, where we caught Manuel Lanzini in a pair of Nike Mercurial Vapor IX CR7, which was originally designed for Real Madrid's Cristiano Ronaldo. Ronaldo is a worldwide phenomenon and it is probably not the last time we see anyone wearing his boots. 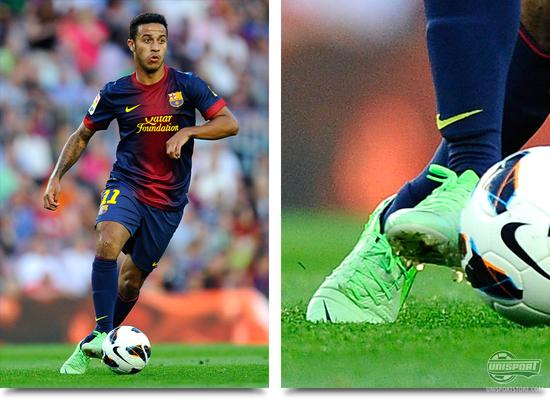 Thiago Alcantara (Barcelona)  Nike CTR360 Maestri III ACC Fresh Mint/Black-Neo Lime Things were looking set for Thiago to make the change from his Maestri III Fresh Mint/Black-Neo Lime, as the talented midfielder joined A New Breed of Attack, which would mean he would be playing in the new Nike Hypervenom Phantom. He did however not choose to do so and stuck to his control boot, but you would think the Hypervenom will come into play soon. 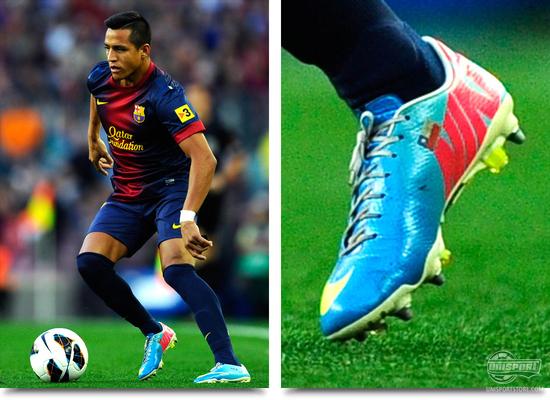 Alexis Sanchez (Barcelona)  Nike Mercurial Vapor IX ACC Neptune Blue/Volt-Tide Pool Blue The Chilean winger was also among the players, who had a pair of Nike Hypervenom Phantom sent to him, but in the seasons last game against Malaga he also chose to play in his Nike Mercurial Vapro IX ACC Neptune Blue/Volt-Tide Pool Blue. We can however not imagine any other reason behind it, other than that they needed breaking in. 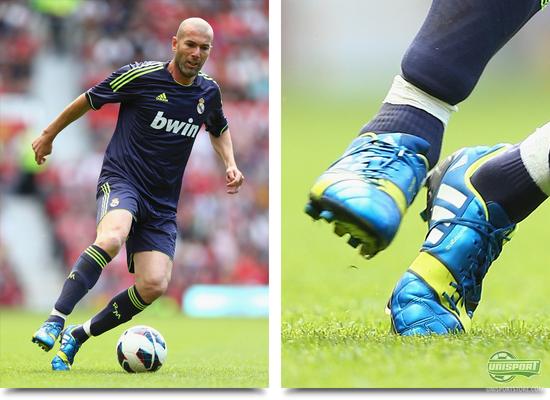 Zinedine Zidane (Real Madrid)  Adidas Nitrocharge 1.0 Blue Beauty/Running White/Electricity There were prominent guests visiting Old Trafford this weekend, when a charity match between Real Madrid and Manchester Untied's legends paned out. The Kings club have plenty of legends to choose from, but who could possibly forget Zidane and quite surprisingly he was not wearing a pair of Adidas Predator boots. The choice instead landed on a pair of Nitrocharge 1.0, which the Frenchman praised heavily at the Adidas Lab-event, where Jakob also was in attendance. 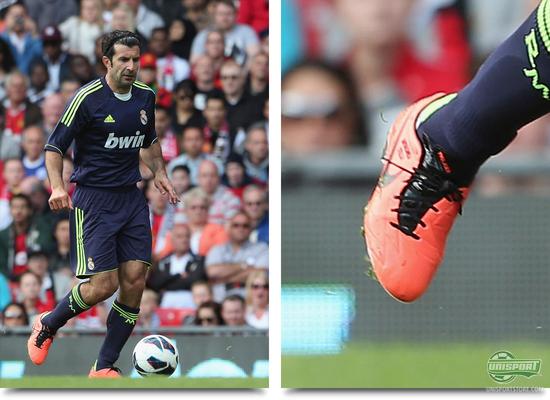 Luis Zigo (Real Madrid)  Nike T90 Laser IV ACC Mango/Black Throughout his glorious career the Portuguese winger was an avid user of Nike's T90-collection and we were therefore very happy to see him wearing a pair, on the other side of his retirement. When he took to the field for Real Madrid's legends this weekend, he donned the Nike T90 Laser IV ACC Mango/Black, which would also turn out to be the penultimate boot in the collection. 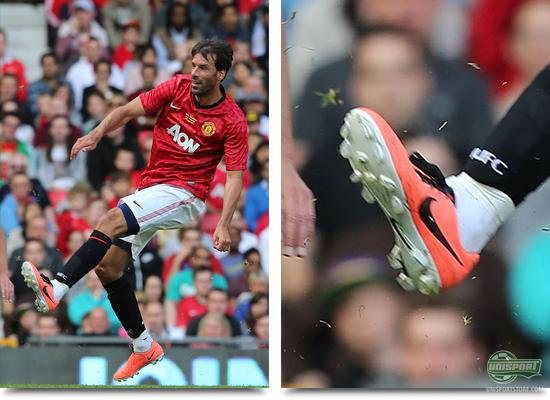 Ruud van Nistelrooy (Manchester United)  Nike T90 Laser IV ACC Mango/Black The Dutch sharpshooter took one half for each of the clubs, but he did not change boots at half time. A loyal Nike-athlete, who throughout his career played in both the Tiempo and Mercurial, gave the T90 Laser IV ACC Mango/Black their début. The thought behind that boot was also to arm strikers like him with the perfect weaponry; so, a good choice from RvN. 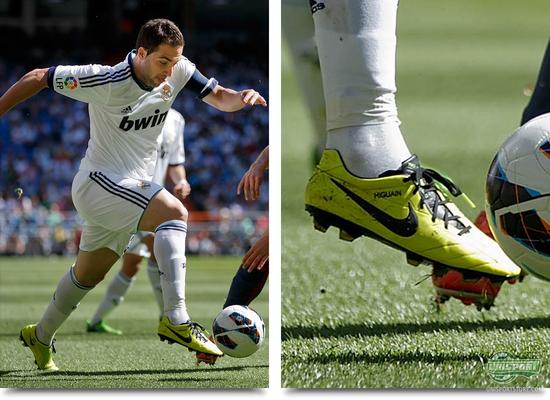 Gonzalo Higuain (Real Madrid)  Nike T90 Laser IV ACC Volt/Black-Citron The 'real' Real Madrid, were also in action for the last time this season and this was with Gonzalo Higuain as captain. This was because it was, in his own words, his last game for the Madridistas, as he wants to find a new club that loves him. He is also set to switch to the Nike Hypervenom Phantom soon, but rounded off the season in a pair of T90 Laser IV ACC Volt/Black/Citron. 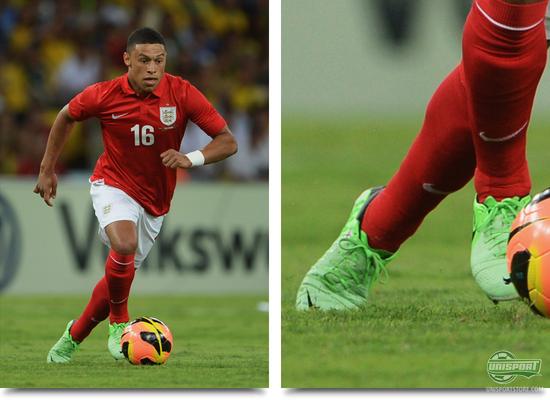 Alex Oxlade-Chamberlain  Nike CTR360 Maestri III ACC Fresh Mint/Black-Neo Lime When they met at Wembley earlier this year, England won 2-1 against Brazil, but now the Selecao had the home advantage. The Brazilians deservedly went ahead, but then Oxlade Chamberlain showed up and slammed in the equaliser. He did so in his Nike CTR360 Maestri III ACC and we couldn't help but think that a pair of Hypervenom Phantom would suit him. Your thoughts? 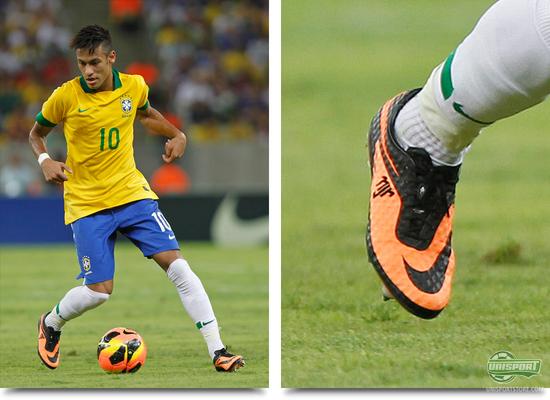 Neymar Jr. (Brazil)  Nike Hypervenom Phantom ACC Black/Bright Citrus In the game at Wembley, the newly unveiled Barca player, wore the number 11 and a pair of Vapor IX. Times change and he has now taken over the number 10 from Ronaldinho and is now wearing the new Hypervenom Phantom, with which he played significantly better than in England. No one knows what number he will wear at Barcelona, but we are certain he won't be nicking the nr. 10 from Messi. 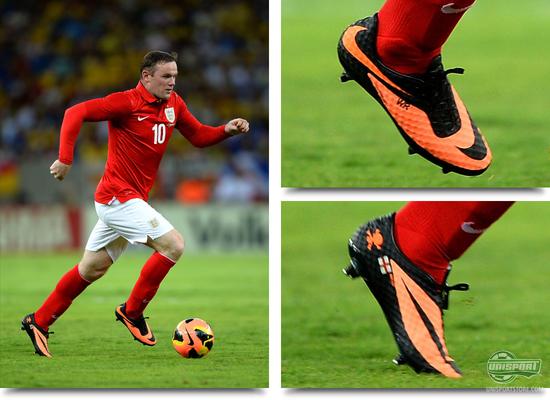 Wayne Rooney (England)  Nike Hypervenom Phantom ACC Black/Bright Citrus He is a Manchester United player for a little while longer yet, but he has aired his desire to move on. Where he will be moving on to is however uncertain, but what is certain is that he will be playing for England. This probably lifts the mood of plenty of Englishmen around the world, as he first assisted the first goal and then afterwards scored the second. He scored in true Rooney style and we are sure he is enjoying his Nike Hypervenom Phantom!

This was the first round of boot spots this summer and even though the prospect of no club football until August is daunting, we can soothe ourselves with the forthcoming Confederations Cup. What do you say to this weeks spots? Have we missed something? Share your spots with us in the box down below, or on Twitter and Facebook.