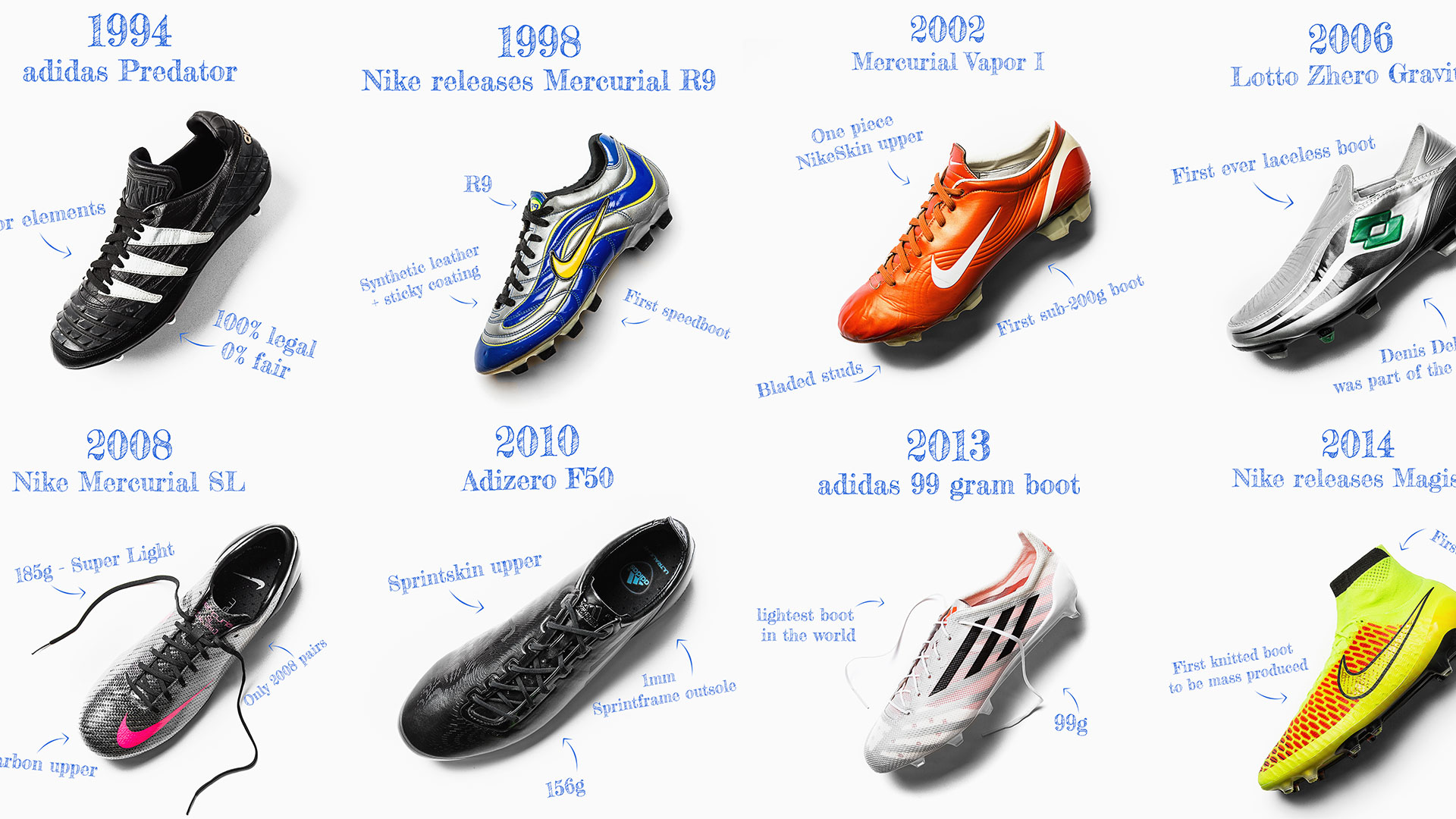 2016 held an impressive number of innovations, which impressed us. Earlier this month JayMike made a video of the biggest innovations in history and that has now resulted in this visual run-through. Read along here.

Before 1994 the world of football boots was limited to basically two football boots: adidas Copa Mundial and PUMA King. These two football boots dominated the scene on the feet of giants like Pele, Maradona, Beckenbauer and Platini. But in 1994 something happened. Something that would kickstart a revolution, which opened the doors players didn’t even know existed.

Both adidas and Nike launched their football boots, which offered a stronger alternative to the two established boots. However, while the Nike Tiempo was still relatively conservative, the adidas Predator looked more like something from a Sci-Fi film. The upper was made with the iconic strike elements, which made your shots more powerful. The standard for innovation was set by adidas that day.

Fast forward four years to the World Cup in France, and that was when Nike really joined the race. The bold design of the Mercurial truly sparked an innovation interest in football boots, which from then on would be seen as more than just tools of the trade. The construction was the most interesting aspect, as it was the first synthetic upper and had a grippy texture. This was the world’s first real speed boot and four years later, in 2002, Nike proved that their Mercurial had come to dominate, as they introduced the first boot below 200 grams.

Out of the blue in 2006, Lotto decided to join the race. They did so with a concept that most of you probably today associate with adidas’ PureControl. Because no, the adidas boot was not the first football boot without laces. That was the Lotto Zhero Gravity. The boot never became a massive success, but a cool little “fun fact” was that one of the designers behind the boot, was Denis Dekovic, who later was one of the driving forces behind the Nike Magista Obra and these days works for adidas. With that in mind, I don’t think I need to tell you that he has played a pretty central role in the development of modern football boots.

In 2008 Nike flexed their innovation muscles once more and introduced the Mercurial SL. A boot weighing just 185 grams and made with an upper entirely from carbon. The boot was never any more than a concept boot and is to this day considered one of the most revered collectors objects. Moving onwards, nothing too off the wall happened until 2010, where adidas introduced the F50 adizero. Clocking in at 156 grams, adidas showed that the battle for lightweight supremacy was far from won by Nike and when it comes to the adizero silo - well, as they say, the rest is history.

The year before Nike revolutionised the world with the Magista Obra, adidas had one last lightweight masterpiece to unveil. The 99 gram boot was introduced for the first time in 2013 and again re-produced earlier this year. This was however more of a show of strength from adidas than an attempt at creating a real football that could be worn for more than a handful of games.

The Nike Magista Obra was however very much primed for on-pitch action. The first football boot with a high-top sock and an upper of Flyknit material. In many ways you could say that the Magista Obra is to 2014, what the Predator was in 1994. It set a new standard for football boots and without the Obra boots like adidas’ PureControl wouldn’t have been birthed. They heard Nike’s call to arms and raised the bar with a laceless construction, which unlike the Lotto Zhero Gravity has very much found a place on the football boot market.

Nike have had a relatively calm 2016, when it comes to innovation. That being said, even in a chillaxed year by their standards, they have still got something new to show. The Anti-Clog has taken the fight to a problem, which has been there right from the first ever football boot: Mud clogging up the underside of your boots. An exciting innovation, which will be interesting to follow in the coming years. Will it earn a spot on the football boot market or is the problem too trivial for people to care?

Towards the end of 2016, adidas introduced something under the radar, which could turn out be a serious gamechanger. adidas GLITCH lets you change out the upper on your football boots, without you having to buy a new pair. You buy an inner skeleton, which fits your foot and then you can always order new outer shells that you can freely interchange between. It works through an app that is only active in London, but with the positive reactions it has received you can expect it branching out soon. This could very well change the way we buy football boots and perceive them.

The thought is certainly interesting...