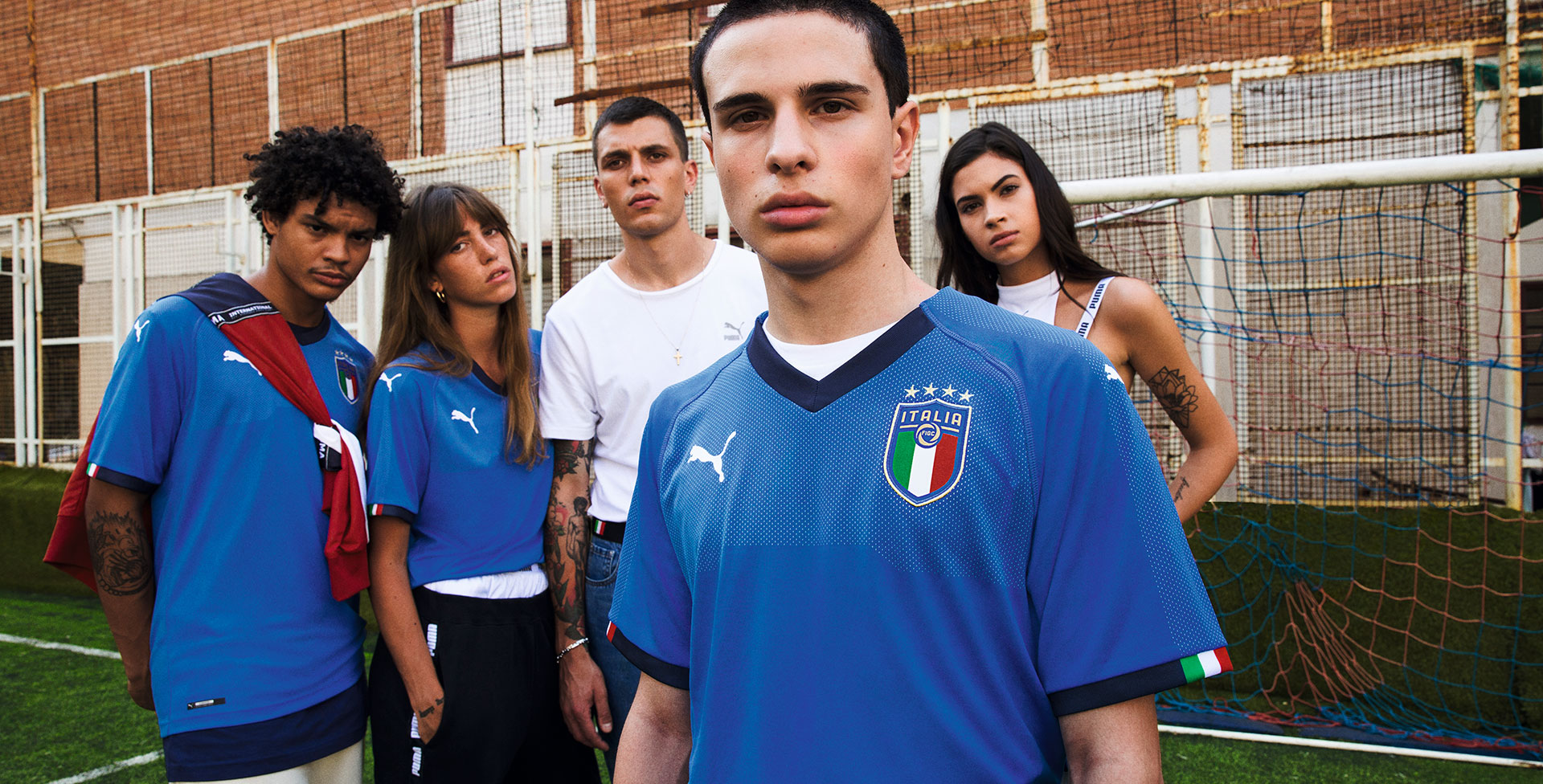 There is still quite a while to go, but it seems PUMA can’t wait any longer and that is why they today get Italy ready for the 2018 World Cup in Russia with a brand new home-shirt in the famous azure blue colour. A shirt that will also be used to celebrate a very special 20th anniversary. Read more and enjoy it below.

Ever since the switch from Kappa in 2002, PUMA have been responsible for the Italy shirt at every tournament. There have been both ups and down for Gli Azzurri, but the 2006 World Cup obviously stands out as the biggest triumph of the last sixteen years. The team behind the leaping cat continue their journey together with the Italian national team, and have again this year created what can only be described as shirt art.

The new Italy shirt is adorned by the Italian football association FIGC’s new logo, and the shirt is designed to bring back memories of Italian greats. The shirt is naturally based on the historic azure blue colour, which instantly takes you back to the time you pulled on your first Italian football shirt and watched your heroes from the stands or at home. Add to that small details like the ‘Il Tricolore’ on the sleeves and neck, and the result is a simple, but still very enticing shirt. If all PUMA’s World Cup shirts reach these heights, then we definitely have a lot to look forward to.

On top of being Italy’s potential World Cup shirt, the new Italy shirt from PUMA also serves another purpose, as it will also be used to pay tribute to one of the national team’s greatest ever players, Gianluigi Buffon. Since his first ever cap in 1997, Gigi has been through just about everything. The sun in Marseille, the rain in Brazil, the Vuvuzelas, some tears of disappointment and lots of tears of joy too. He has guarded the net more than 171 times, worn the captain’s armband since 2010, lifted the World Cup in 2006, and if Italy do manage to qualify for Russia 2018, then it will be a record sixth World Cup appearance. However, despite giving absolutely everything he has for his country, never has he, one Italy’s most legendary players ever, had the honour of wearing the iconic azure blue home shirt. That changes on the 6th of October.

For the World Cup qualification game against Macedonia, Buffon will be the only player on the pitch to wear the 2018 Italy home-shirt from PUMA, while the outfield players will all wear the current away-shirt. A beautiful gesture that it has to be said is very well deserved after 20 years playing for Italy. Buffon is well deserving of wearing the colours that so many other legends have worn through the year too. The rest of the team will have to wait until the last qualification game against Albania on the 9th of October, before they get to try on the new shirt. And as it looks currently, they can also look forward to wearing it for the playoff-games, where they will certainly need Gigi’s fighting spirit and saves, if they are going to ensure a ticket to Russia next year.

Do you also want to celebrate Buffon? Or do you just think the new Italy shirt is nice? Get ready for the World cup, and get your shirt here.