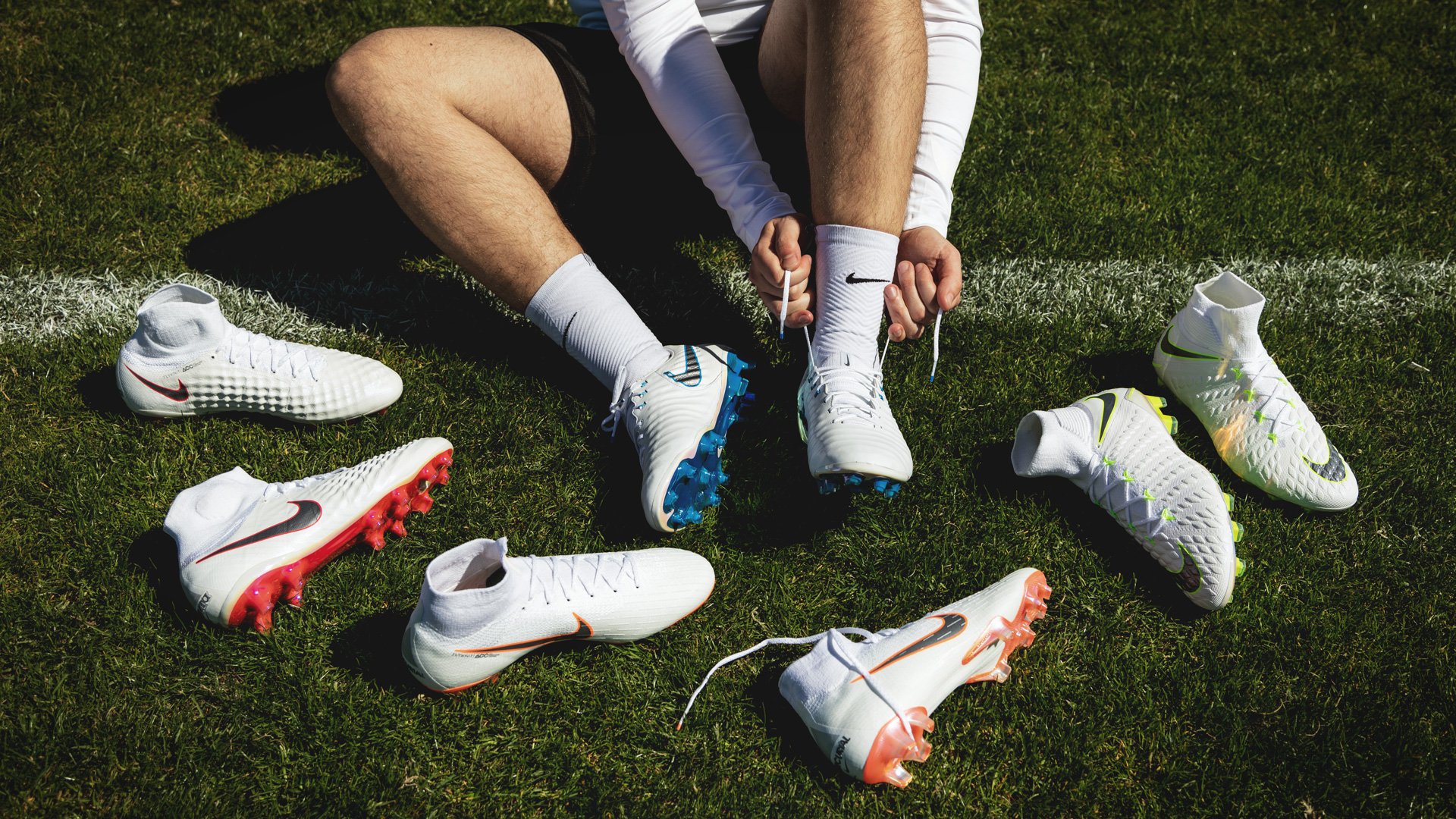 You can almost feel the World Cup when the different brands are launching their World Cup boots. Nike has focused on giving us a simple, yet eye-catching World Cup colourway. The World Cup Pack is named “Just Do It Pack”, referring to make the players go play for the World Cup Glory, while also inspiring players around the world to go after their dreams!

Wear white while the world is watching! These are the words Nike associates with their latest World Cup colourway, and you can almost feel the World Cup when reading this and looking at the boots. Football will indeed be in the center stage this summer, and Nike players from every country will complement their national team colours with these white boots. The upper is made with a matte pearlescent skin and metallic grey Swooshes. Nike has furthermore stepped up their soleplate-game, giving their World Cup pack a premium plate finish.

Going in depth with the colours, you will see players such Cristiano Ronaldo, Coutinho and Mbappé run around in the white Mercurial boots, which also includes an orange coloured soleplate. The orange inspired plate takes us back to the launch colour of the new Mercurial-boots, giving a complete look. The quick reader might have spotted that there is a minor change on the World Cup Mercurials which is correct! Nike has moved the Swoosh, so it is placed on the same side as all the other silo’s. There might have been some dislikes since they choose to move it back, but the change gives a true Mercurial design.

Moving on to the Magista! Nike’s control boot has also received a World Cup treatment. While the Mercurial got an orange coloured soleplate, the Magista’s have been made with a Red soleplate. Expect Kevin De Bruyne, Andrés Iniesta and Christian Eriksen running around dominating the game with their magnificent touch and pass. The red soleplate gives the Magista a true control finish, alarming all the opponents to be aware when these players have the ball at their feet!

The Hypervenom is just made more venomous with the volt coloured sole. Defenders and goalkeepers know that it’s a matter of seconds before Harry Kane, Edinson Cavani and Robert Lewandowski puts the ball in the net, when they shoot the ball with a lethal strike. The volt soleplate is ment to be for the Hypervenom and the boots might just be the best boot of the entire Just Do It Pack!

But we mustn’t forget the Legend of all boots. The Tiempo has gotten a Royal treatment towards the World Cup and has been made with a blue coloured soleplate. Sergio Ramos, Gerard Piqué and Raphaël Varane are all going to stop attackers looking sharp and ready in the Tiempo Legends!

You might think that you have seen these boots or colourway before, and you are actually right on this one! We saw a similar Pack for the Euro’s back in 2012, and the Euro 2012 Pack was also used as inspiration for the Motion Blur Pack. The colours have been mixed up between the different silo’s, and we saw that the Mercurial had a pink Heel/Collar, Blue for Hypervenom, Volt for Magista and Green for the Tiempo. Nonetheless the new Just Do It Pack are just as colourful and brilliant, as the previous and similar Packs!

Nike has added an extra feature onto the Just Do It Pack, which will make the World Cup more personal for the Nike players. Nike has added a triangle with 32 lines on the heel. All these lines represent the 32 nations which have qualified for the World Cup in Russia. But the different Nike players can opt to get their national flag placed in the triangle. So, you might be able to see Ronaldo having the Portuguese, Mbappé with the French flag, Coutinho with the Brazil flag and so on.

The World Cup is getting closer and closer, and the Nike Just Do It Pack is just one of many packs out there. See our entire collection of football boots and find the perfect boot for you.