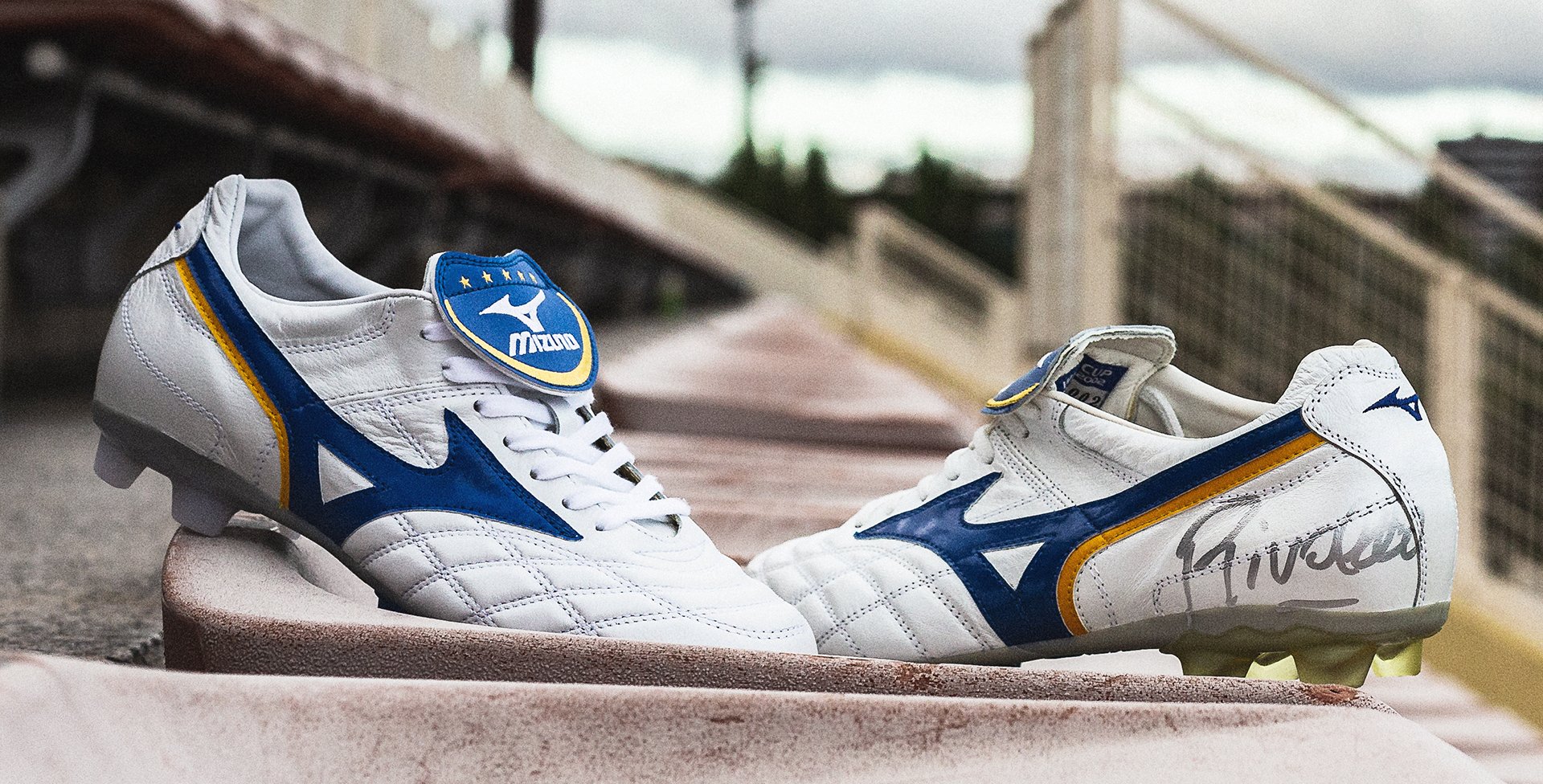 A classic reborn. Mizuno goes back in time to make the Wave Cup better than ever. Inspired by the original Wave Cup, but upgraded for the modern game. Let’s get nostalgic with the new Mizuno Wave Cup Legend boots.

Let’s briefly talk about the 2002 World Cup before going into details with the new boot. You might ask, why the 2002 World Cup? Well this was the year were Brazil won the World Cup, and a very special player played an important role in the success. Furthermore, this player also wore the special Mizuno Wave Cup boot. You might have guessed that I’m referring to Rivaldo, and it’s his boot that Mizuno has brought back.

During the 2002 World Cup, Rivaldo might have be one of the key players for Brazil’s success. He got rewarded with 3 MOTM awards, more than anyone else, and scored 5 goals, while also getting the World Cup gold medal, impressive stuff. But you might remember that he played in a pair of white boots with blue logo, which back then was pretty much unseen. They weren’t ordinary Wave Cup boots, as they were specially designed for the main man himself, and this helped his performance reach utmost heights.

The Wave Cup boots Rivaldo used were specially made for him and was packed with innovations and technologies. And this was only achieved by doing repeated tests with the Brazilian star.

Mizuno are well-known for making handmade quality leather boots, which isn’t something you see that much on the modern football market. Mizuno launched their first generation of the Wave Cup in 2001, and this was the first time that the boots featured the Mizuno Wave technology. Mizuno were already ready with their second generation the year after, and here they used their Compact Wave. This was a lighter version, with a barefoot feel for greater ball control.

The 2018 Mizuno Wave Cup Legend celebrates the Brazilian legend, with remaking the 2002 Mizuno Wave Cup into a Wave Cup Legend. The classic boot is still all about quality and features Mizuno’s popular kangaroo leather, a soft, smooth, thin and strong leather, that also offers a feeling like the boots were made for you. You also get the iconic fold-over tongue, which Rivaldo also had on his boots, but with 5 stars instead of 4, due to they won the World Cup the same year, and yeah 5 stars sounds nicer than 4.

The outsole is just something special. It’s an 1-to-1 remake of the original 2002 Wave Cup, which was specially designed to fit Rivaldo’s feet. This mean that Mizuno made a different stud configuration pattern, than they normally did on their Mizuno boots, which meant that it fitted Rivaldo’s foot structure. This is pretty neat, if you take technology and design into consideration back in 2002. And it als let Rivaldo accelerate faster than ever before, which could be the key factor to the World Cup success?

We are so crazy about this new Mizuno Wave Cup Legend, and are big fans of brands bringing back old iconic boots. There might be some boot collectors out there, who are just as hyped as we are!

Be fast and get your own Wave Cup Legend right here at Unisport!
We use cookies to improve your experience, show you products you may like and save your cart. Continue if you're ok with this, or read more in our privacy policy.