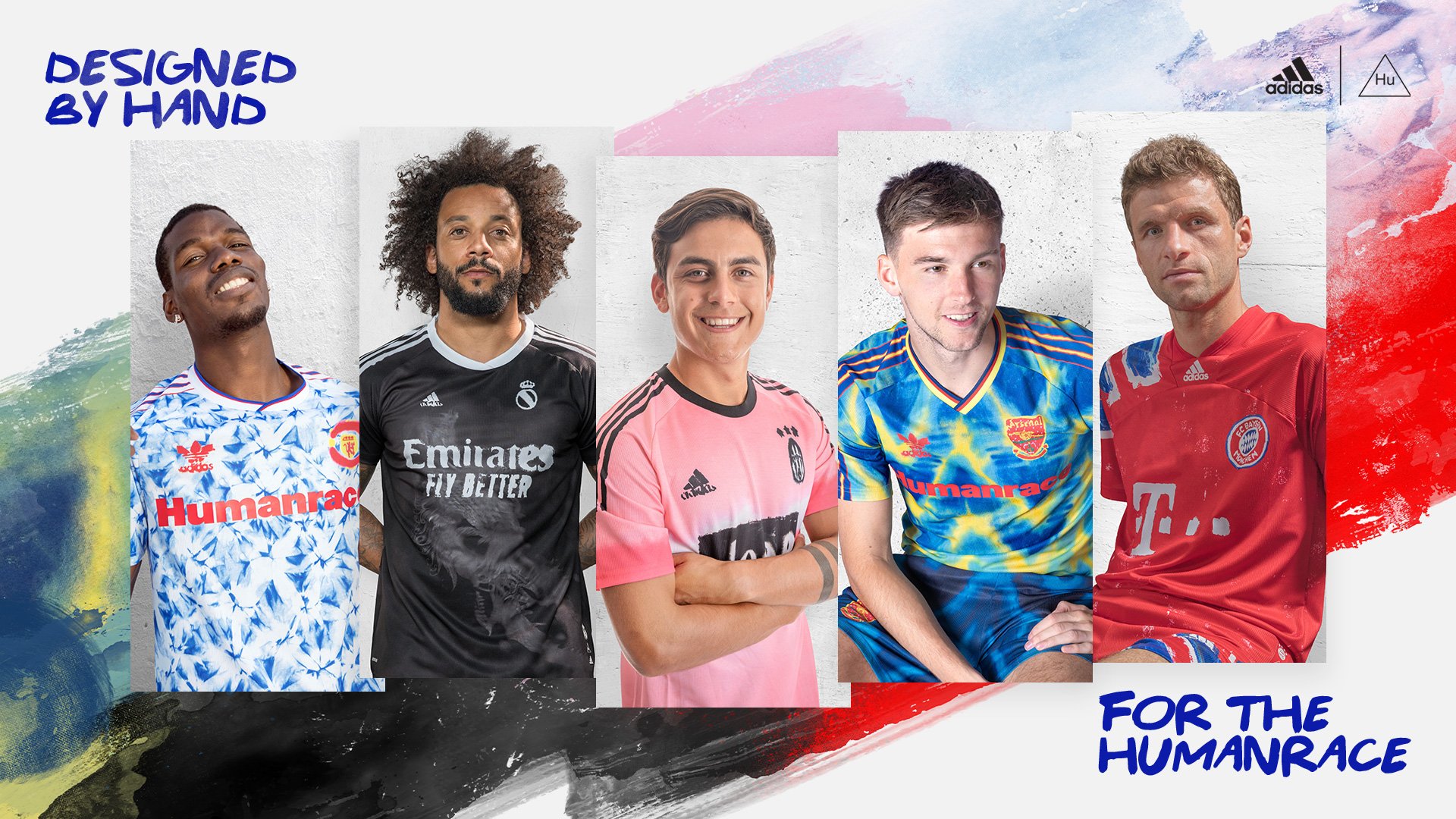 Pharrell Williams and football - together? It sounds strange but it’s actually true. adidas and the popular artist are moving from the fashion world to the football pitches. And it’s quite a sight. Today we will see new shirts, boots and sneakers from the collaboration!

Some of the biggest clubs are wearing adidas shirts, including Manchester United, Real Madrid, Juventus, Arsenal and Bayern Munich. They have all worn some iconic shirts in the past. And some of these shirts are about to come alive again with the help of Pharrell Williams and his Human Race concept. But we will not only see shirts from adidas today. We are also getting spoiled with a pair of Predator 20+ and some sneakers among it all.

We will start off with one of the best looking boots of 2020 - the Predator 20+ Human Race x Pharrell. It’s sort of a remake of the Predator Accelerator from 1998 but not really. It has the same design with the big, white adidas stripes going all the way around the upper and the iconic red and black colours. But from there the similarities stop. The design is made to look like it’s been painted with a brush, which is also to be seen on the rest of the Human Race collection. It’s a perfect mix of nostalgia and Pharrell’s creative touch.

You can get the Predator Human Race x Pharrell right here.

We move on to the shirts. And can we just say “wow”! This is true eye candy! Bayern, Real Madrid, Juventus, Manchester United and Arsenal are really hitting it off with Pharrell and adidas! The shirts honour the clubs legacies with designs inspired by iconic looks. And like the Predators, they have a hand painted design. Let’s start off with the Juventus shirt. A pink beauty. Inspired by the away shirt of the 2015/16 season. This one was so hyped, that even Drake posted a picture of him in it on his Instagram. It also has the old Juventus crest in a painted design - as well with the Jeep sponsor logo.

The Bayern Munich shirt is inspired by the home shirts from 1991 to 1993. We love the detail with the three adidas stripes on the right shoulder instead of on both arms. And the brush stroke design really hits the spot.

Manchester United’s shirt is quite something. It takes inspiration from the 1990-92 away shirt. A shirt with an all over graphic design in white and blue colours. We can’t help it… we can’t say anything else but “wow” to this one.

Moving on to Real Madrid. One of the boldest shirts to be made. The now iconic third shirt from the 2014/15 season has come back to life. This remake is almost as good as the original. And we love the detail with the simple club crest as well.

Last but not least we have the Arsenal shirt. Inspired by the “bruised banana” design from 1991, we get an eye-catching shirt for The Gunners. The mix of blue and yellow get a nice, painted touch, when the colours are mixed into a green tone as well.

You can get all the Human Race x Pharrell shirts right here.

We are also getting spoiled with sneakers. And not just one pair, but two. Specially made for the Manchester United and Arsenal fans. Or just for people who love cool sneakers.

The Manchester United sneaker is made in the same design as the shirt - blue and white. The Arsenal is made in blue and yellow. They both have a laceless upper and a Boost outsole for optimal comfort.

We expect you to be excited about this launch from adidas - because we are!