Another week of Champions League-football is over and there was both plenty of goals, old colourways, not yet released boots and old classics. We collected them all, so you can pick your favourites. Check them out here. 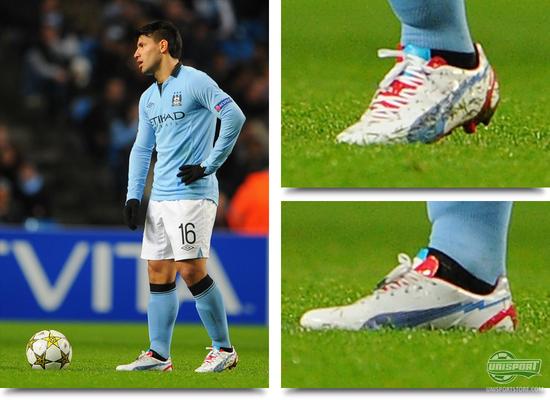 Sergio Agüero (Manchester City)  Puma Evospeed 1 White/Red/Blue The Argentinian front-man did his best, to put things right in the English champions clash with Ajax. After just 20 minutes the reigning Dutch champions found themselves 2-0 up in Manchester and had it not been for goals from Yaya Toure, who also played in Evospeed, and Agüero goal, the humiliation had been complete. But the quick striker did score, and he did it in the launch colour of Puma Evospeed 1, which did surprise us a little, as he's previously been keeping up to date with the latest models. 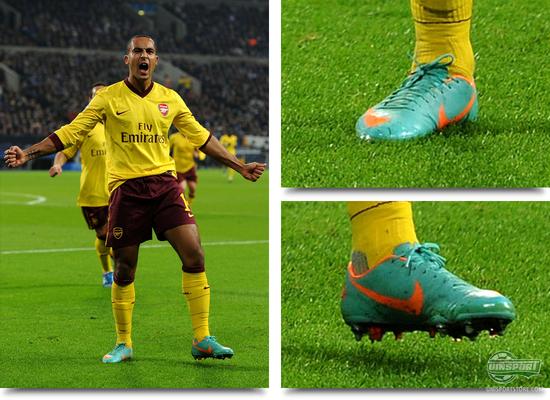 Theo Walcott (Arsenal)  Nike Mercurial Vapor VIII ACC Retro/Total Orange/Challenge Red The lightning quick winger, is walking around with dreams of playing as a striker for Arsenal and is refusing to extend his contract until he's promised a role as striker in the future. Arsene Wenger is however not a man who likes to be pushed around and is consistently forcing Theo out on the wing, but every time Walcott features there seems to be goals in his Nike Mercurial Vapor VIII ACC Retro/Total Orange/Challenge Red and this was also the case against Schalke 04. His contract runs out this summer  can Arsenal live without him? And where would he move to? 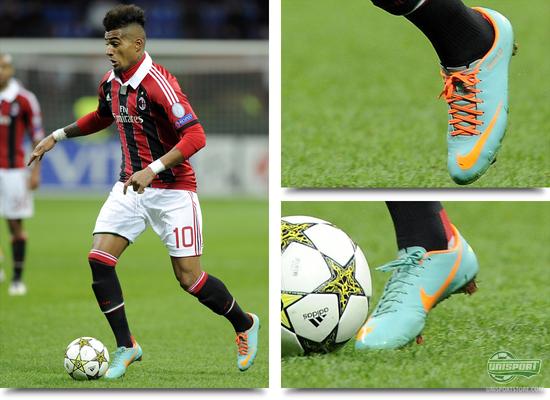 Kevin-Prince Boateng (AC Milan) - Nike Mercurial Vapor VIII ACC Retro/Total Orange/Challenge Red As his hair probably suggests, this Ghanaian is a man, who to likes to express his colourful personality. Therefore it comes as no surprise, that he has chosen to (pimp) his Nike Mercurial Vapor VIII ACC Retro/Total Orange/Challenge Red a little. On his left boot, Milans number 10 has changed his shoelaces with orange ones, that match the accent-colours of the boot. A cheeky little touch, that gives his look a bit of edge... not that he really needs it. 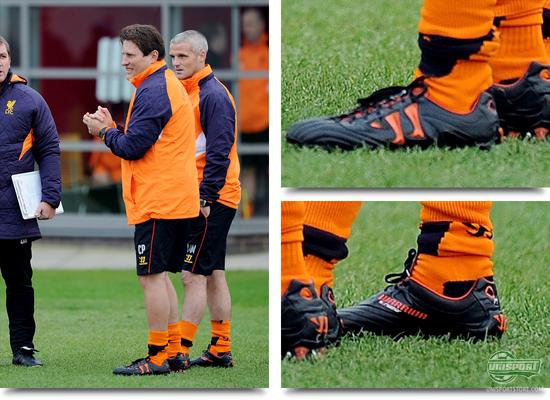 Colin Pascoe & Mike Marsh (Liverpool)  Warrior Skreamer Black/Red The coaching staff at The Reds continue to wear the boots from American Warrior, the brand that is also responsible for the clubs shirts and training-gear. Our knowledge of the boot is still restricted, but from these images we can make out the text Skreamer on the medial side, which could quite possibly be the name. We are still perplexed by why, Colin and Mark aren't using blackout version, as this is still an unpublished boot. - When do you think we can expect a launch from Warrior? 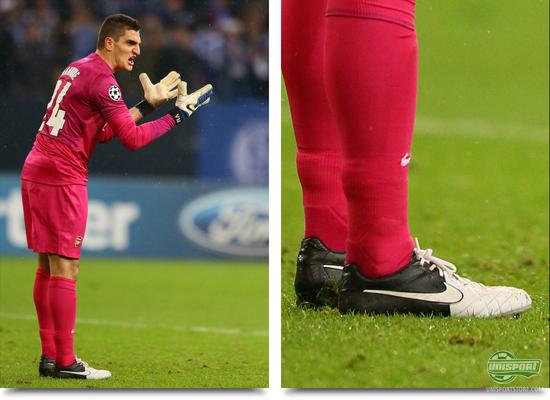 Vito Mannone (Arsenal)  Nike Tiempo Legend IV Clash White/Black The Italian goalkeeper is slowly, but surely working his way through every single Nike football boot out there. We have seen him train and play in a pair of Nike CTR360 Maestri III, just like he's lately also been taking a liking to Nike T90 Laser IV, like the ones his injured goalkeeper colleague Wojciech Szczesny use. In the game against Schalke 04, Mannone pulled out a pair of Nike Tiempo Legend IV from hiding, before changing to Nike T90 Laser IV at half time  Maybe he'll be wearing a pair of Vapor VIII's in the weekends game? 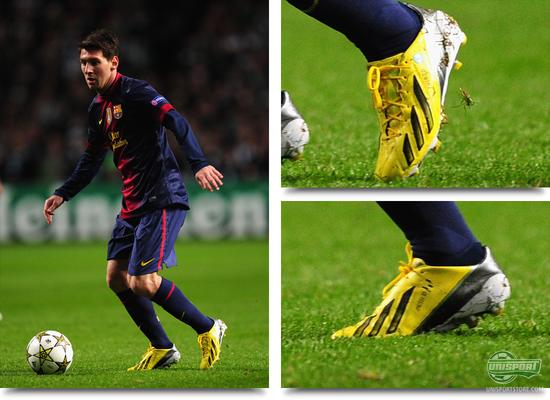 Lionel Messi (FC Barcelona)  Adidas F50 Adizero Yellow/Black Wednesday evening will be a day in football history we will probably never forget, where FC Barcelona could boast having 89% ball possession and a farcical abundance of chances. None the less they had to leave cold Scotland, with a 2-1 defeat. Going behind 2-0, it would naturally take a bit of Messi-magic to bring the Catalans into touching distance and when débuting his new Adidas F50 Adizero, the Argentinian reduced the deficit. These days he cant score without breaking records and today was no different: Messi is now the player, who has scored the most goals away from home, in the Champions League. 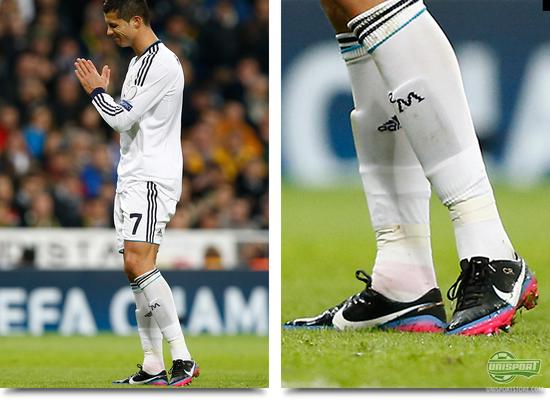 Cristiano Ronaldo (Real Madrid)  Nike Mercurial Vapor VIII ACC CR7 A man, who has been very much in the spotlight this week, is the gentleman above, he has just unveiled his new signature boot; Nike Mercurial Vapor VIII ACC CR7. He showed it to the world, in the midweek game, where Real Madrid played Borussia Dortmund at home. The reigning Spanish champions, fell behind twice, but left Bernabeu with a draw. Ronaldo didnt't quite display his top gear, but on the other hand, we got to see his new flashy boots in action and they seemed to do a really good job for him. 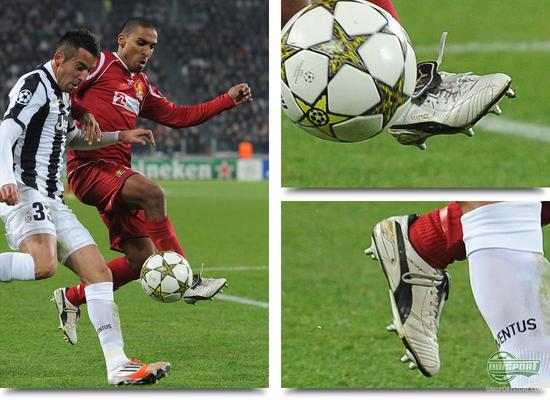 Patrick Mtiliga (FC Nordsjaelland)  Puma King Finale White/Black The Danish left back, that has fallen out of favour with the Danish national coach, when he seemingly refused to play against Italy, has delivered a very classic boot-spot last night. He's not the type of man to get carried away with Mixed stud-configuration, modern boot-technology and other lollygagging, He just needs a pair of good old Puma King Finale with six iron-studs. It was however not enough to prevent a crushing 4-0 defeat, but none the less a super boot-choice. 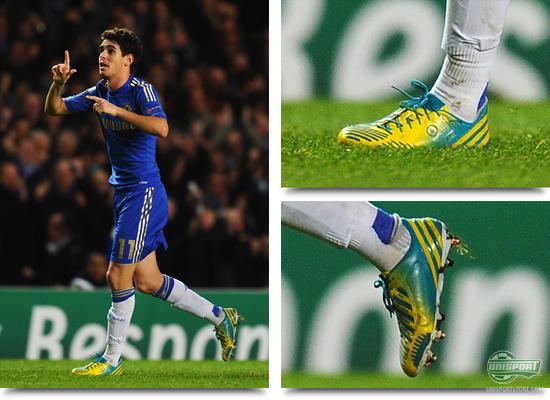 Oscar (Chelsea) Adidas Predator LZ Custom Yellow/Sky blue The Brazilian mega-talent is definitely starting to establish himself ,as being one of the great technical wonders at Stamford Bridge. In a dramatic 3-2 win over Shaktar Donetsk Oscar scored an absolute screamer, as he took advantage of a poor goalkeepers clearance and chested the ball, before smacking it in from 40 yards out. He did this wearing his especially designed Adidas Predator LZ, which he quite surprisingly didn't use in the weekend  But wouldn't you think he'd use them again after that goal? 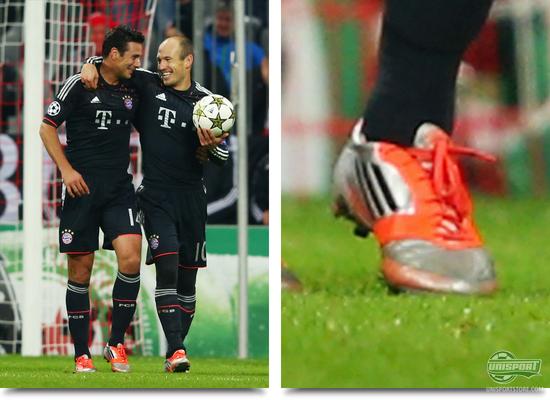 Claudio Pizarro (Bayern Munich)  Adidas F50 Adizero Silver/Orange The German machine bulldozed French Lille, that weren't given many chances in a 6-1 demonstration of power. There weren't actually very many chances for Pizarro either, but none the less he scored a hatrick in his Adidas F50 Adizero. It did seem like, that for the Bavarians all it took to score was a ball into the box and then it was certain to go in. The result absolutely cemented Lilles role, as rock bottom, with 0 points and a horrifying goal difference of 2-12... Ouch! 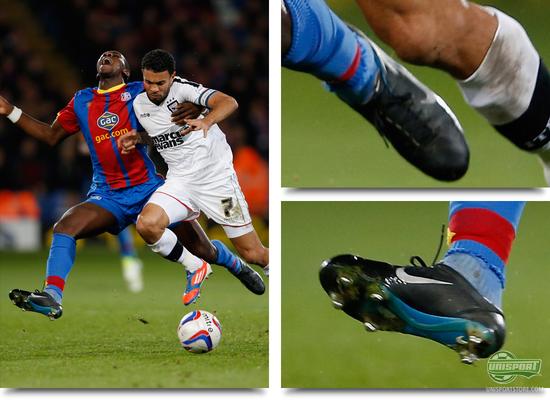 Yannick Bolasie (Crystal Palace)  Nike Mercurial Vapor I Dark Obsidian/White/University Blue We have saved the best for last, where we, in a Championship game between Crystal Palace and Ipswich Town, spotted a classic like no other. We actually have to rewind the clock, all the way back to 2002, to find the release date of this boot, but it's still a class boot today. A pair of the legendary Nike Mercurial Vapor I with SG-studs, was let off its chain and we have to admit, it's impressive that Yannick Bolasie has kept his boots up to scratch for 10 year.

Champions League never seizes to surprise, week in and week out. Had you predicted Lille being stuck on 0 points? Or that Barcelona would loose to Celtic? Or that we would spot the great, great, great, great, great, great, great, great grandfather to Cristiano Ronaldos new CR7-boot in the championship? Okay, the last one had nothing to do with CL, but what the heck we liked it! What do you think of this rounds European football? And the midweek bootspots? Tell us in the comment-section down bellow.