The boot spots for the weekend are now ready and this week we look back at the fantastic round of games, the world of football offered us over the last few days. There's been stupendous local derbies with scintillating rivalries, as well as the goal machine of all goal machines. You can see what boots made an impression on the biggest games around the world. 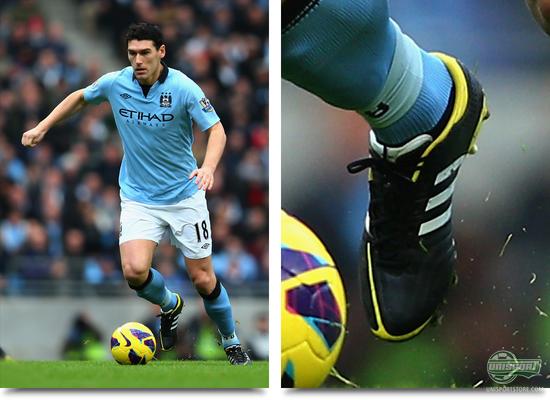 Gareth Barry (Manchester City)  Adidas Adipure 11Pro Sort/White/Yellow At the Etihad we got the seasons first Manchester league-derby, when City and United collided. It was a game between number one and two in the Premier League and anyone who was expecting a tight, closed and tactical affair, would be pleasantly surprised. In a game that gave us both goals and physical battles, only the latest boots would do, and here Barry made sure that his gear was in order. He had pulled on the brand new Adidas Adipure 11Pro Black/White/Yellow and he's done so, as just about the only Adipure-man, as most of his colleagues have gone for the white colourway instead. 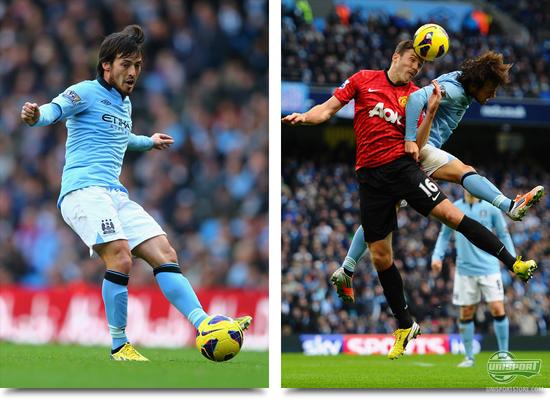 David Silva (Manchester City)  Adidas F50 Adizero Yellow/Black & Silver/Orange The Spanish midfield strategist also started in the very latest colourway of Adidas F50 Adizero, but when the play wasn't going completely according to plan, he pulled the good old excuse; Blame the boots. When he returned from the half-time break it was a pair of the slightly older Silver/Orange Adidas F50 Adizero he was wearing, but not even with these could he find the back of the net. He did however come very close, only to be denied by exceptional goalkeeping. 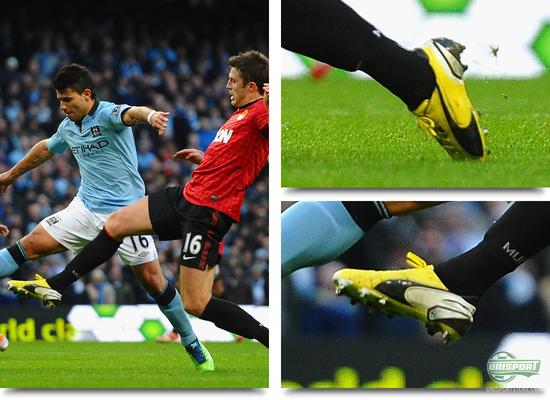 Michael Carrick (Manchester United)  Puma King Yellow/Black The ever reliable midfielder was one of the big names championing the Puma Powercat 1.10, when it was released back in the day, but now where names as Reus, Fabregas and Vidic have starting using it, he has drifted into no man's land. Now he's ready for another stint with Puma, when he from now on will be battling on in the middle of the park, with the classic Puma King and it'll be exciting to see, whether he can replicate the success he has had in the German brands latest reincarnation. 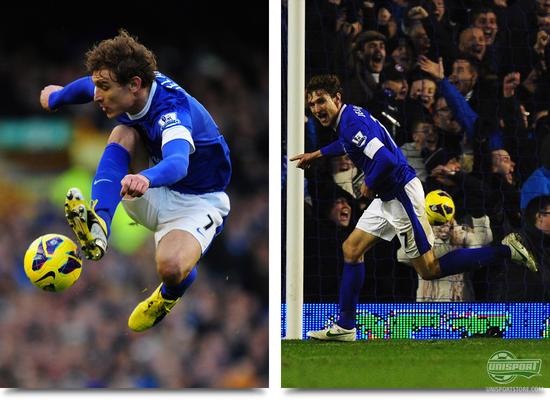 Nikica Jelavic (Everton)  Puma King Yellow/Black & Nike Tiempo Legend IV White/Green Puma have gone for broke in the last couple of years and the new generation of King is already starting to build an impressive repertoire of star players. The always dangerous Jelavic, showed up for the game against Tottenham with a pair of Puma King Yellow/Black, but when they didn't secure him any goals, he decided to change. After the half-time interval he opted for his faithful and trusted Nike Tiempo Legend IV White/Green and almost like it was scripted, he scored. In dramatic fashion Everton overturned a 0-1 deficit to a 2-1 surplus, so you would think it hard, to get him out of these boots for the next round. 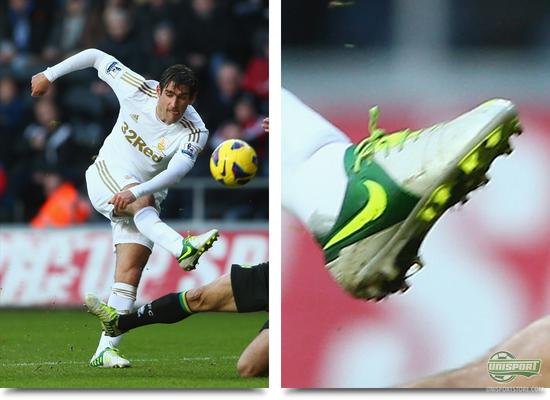 Danny Graham (Swansea)  Nike CTR360 Maestri III ACC White/Volt/Court Green It's been a hard time for Manchester based Umbro, since they were sold from big brother Nike. The contracts have been hard to keep and several of the big, loyal Umbro-players have changed allegiance. The latest to defect is Swansea's Danny Graham, who in a regular goal fest against Norwich, showed off in a pair of Nike CTR360 Maestri III ACC White/Volt/Court Green. He could however not ruffle the feathers of the Canaries, much to the regret of himself and coach Michael Laudrup, when the game finished 3-4 in the favour of chirpy Norwich. 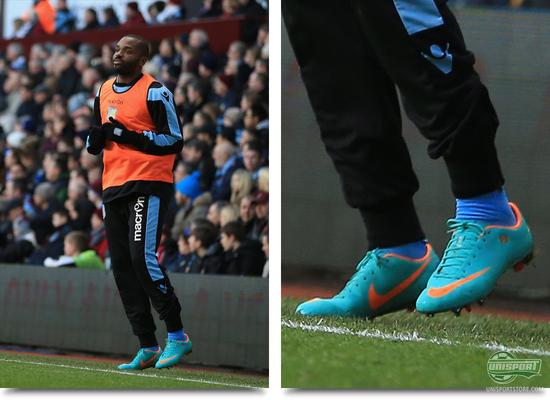 Darren Bent (Aston Villa)  Nike Mercurial Vapor VIII ACC Retro/Total Orange/Challenge Red One of the most prominent Umbro-names has, since the dawn of time almost, been the former England international, Darren Bent. As long as we can remember, he's been a definite Umbro-man, where he played in the classic Speciali, as well as, the Lightweight GT Pro. The striker has lately been pushed out the team, by the commanding presence of Congolese/Belgian Christian Benteke, but he was introduced in the second half for the game against Stoke and that was wearing quite surprising boots. It was a pair of Nike Mercurial Vapor VIII ACC Retro/Total Orange/Challenge Red, so it looks like Nike have snatched another Umbro star. 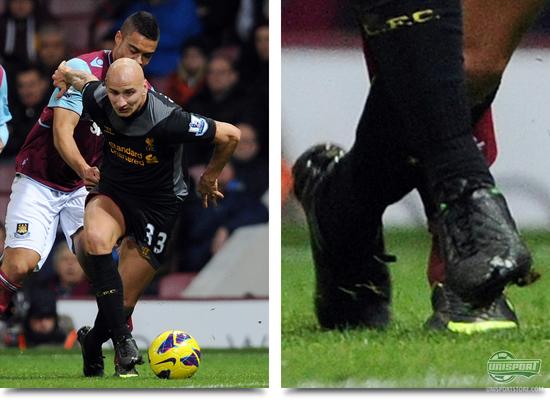 Jonjo Shelvey (Liverpool)  Adidas Predator LZ Blackout The just 20 year old Englishman, is starting to develop into a bit of a boot spots darling, for us here at Unisport, when he week in week out never seizes to shock and surprise us with his boot choices. In yesterday's game against West Ham, there was yet another new boot on the menu, when Shelvey was used as a striker, in the absence of Luis Suarez. For this special occasion he had pulled out a brand new pair of Adidas Predator LZ Blackout, that look incredibly sharp, when matched with the mainly black Liverpool away kit. 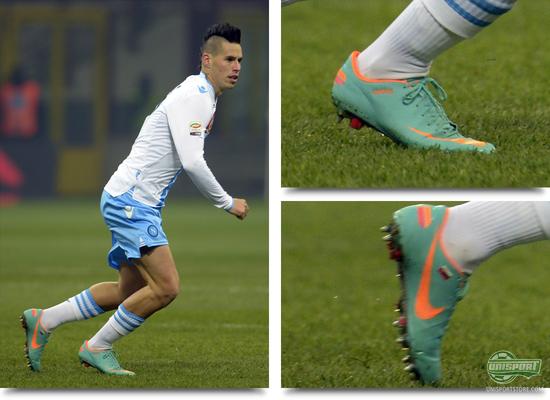 Marek Hamsik (Napoli)  Nike Mercurial Vapor VIII ACC Retro/Total Orange/Challenge Red In the Italian League there was also a few spots of the cheekier sort and if it's not too bold, we would say it's about time. Hamsik who is probably more known for his flamboyant hair-do, has for quite a while been playing in the classic Tiempo Legend IV. For the weekend game against Inter Milan, it was however a boot, that probably reflects Hamsik's radical nature a bit better, he wore. - The boot in question is naturally the Nike Mercurial Vapor VIII ACC Retro/Total Orange/Challenge Red. 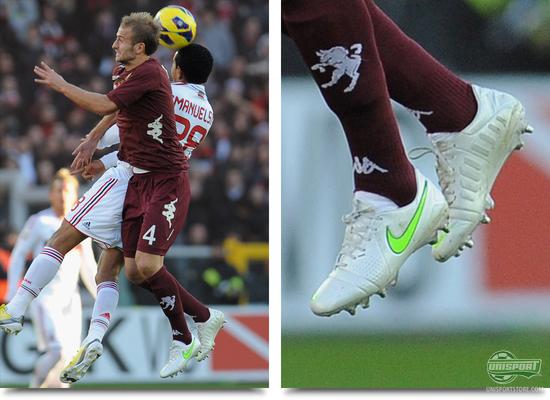 Migjen Basha (Torino)  Nike CTR 360 Trequartista III NikeID White/Neon Juventus' smaller sibling, Torino, wont be cheated out of a representative, in this weeks boot spots, because when you sport a pair of boots, with this much cheek, it should always be celebrated. Relatively unknown Migjen Basha has been in to design his own Nike CTR360 Trequartista III White/Neon, that bear several resemblances to the legendary Tiempo Legend III colourway, which Carles Puyol and Javier Hernandez, just to name a few, were very fond of. Big thumbs up from here, - what do you think of the colourway? 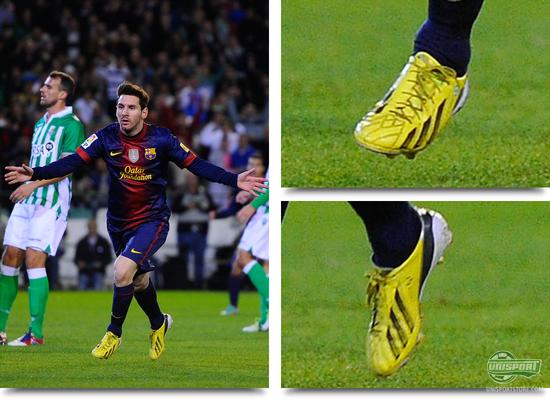 Lionel Messi (Barcelona)  Adidas F50 Adizero Yellow/Black We were all thrilled, for the little Messi, who in the weekend could cement his place in the record books. Again. When he topped Gerd Müllers 40 year record, for most goals scored in a calendar year, as he netted twice against Real Betis, to bring his total up to 86 goals. It may be, that Messi has been taking the penalties and used a few more games than Müller, but none the less the tiny Argentinian, wearing a pair of Adidas F50 Adizero, should be hailed for his impressive achievement. We bow our heads in awe and just look forward to seeing which record he breaks next.

We've been around this weeks rounds of football and there was definitely enough to choose from. Messi broke a new record, but I guess that's turning into a bit of a habit for Barcelona number 10, as well as Manchester United scoring yet another goal in extra-time to seal the win. What did you make of this weeks football? Which is your favourite spot? Share your comments in the box down below.