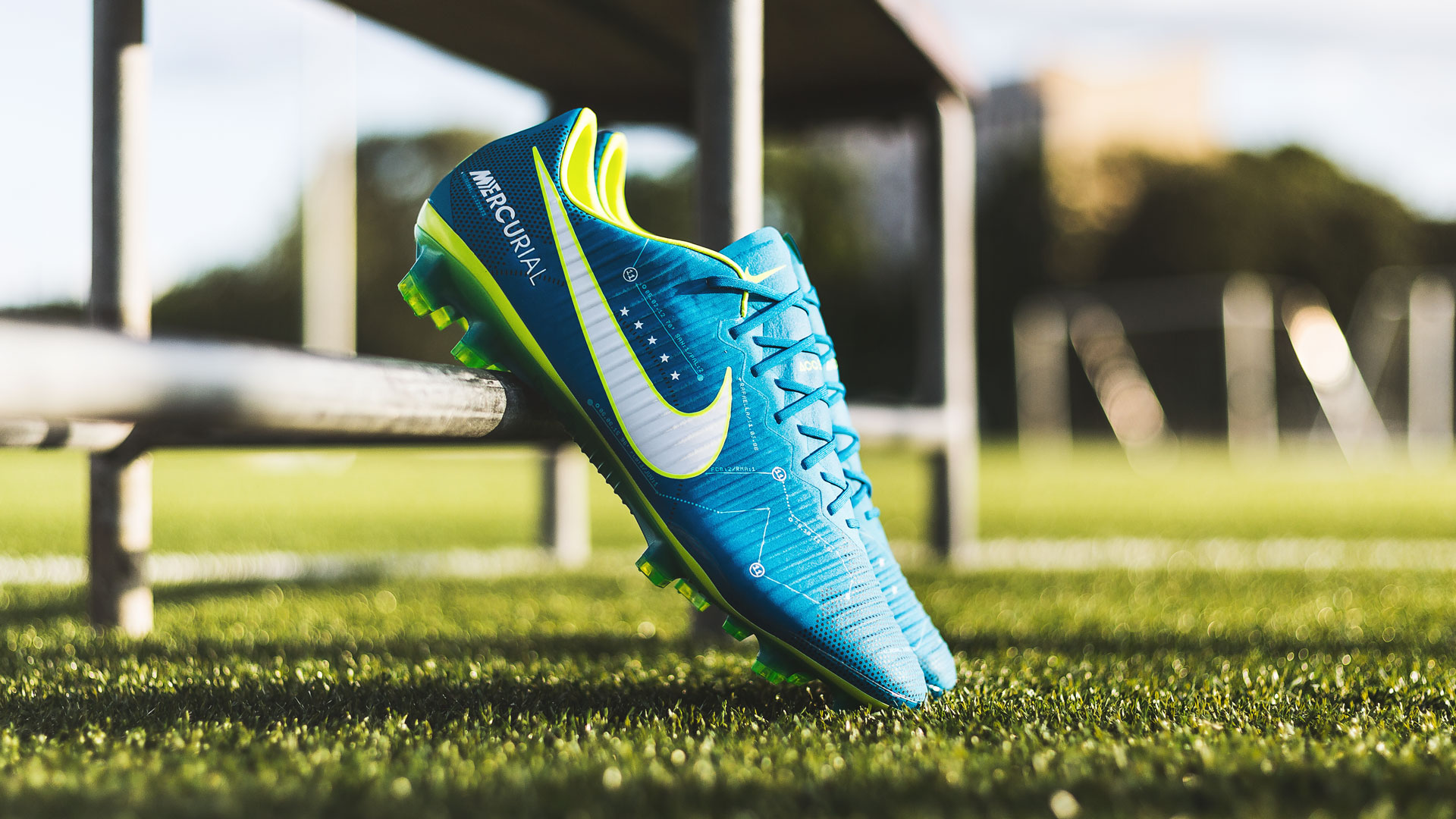 It's here! Neymar Jr. debuts his first signature edition Nike Mercurial. The Neymar Jr. 'Written in the Stars' Mercurial shares the story of the Brazilian talent fulfilling his destiny, and it's awesome. Get the whole story here.

Tabbed for greatness at a young age, Neymar Jr. embraced the pressure and set out to make his family and country proud.

“I grew up wearing Mercurial as a kid, so it’s like a dream to have my story on this boot," says Neymar Jr. "It means a lot that it’s not just about me, but my family and the moments I shared with great teammates on the pitch."

Neymar is one of the best and most skilled players in the game, and now he has also got his own signature boots. And they’re magical!

Combining a stunning Blue Orbit main colour with white for the Swoosh and Volt for elements such as the sole plate, the colours of the Neymar Jr. 'Written in the Stars' Mercurial boots draw inspiration from the Brazilian flag.

The upper of the Nike Neymar Jr. 'Written in the Stars' Mercurial comes with various unique elements such as dates of important goals, Neymars top speed and his shirt number. Tech-wise, the boot is exactly the same as the standard edition of the Nike Mercurial Vapor XI football cleats, but you may also notice that design-wise the Swoosh has been relocated. Made for ultimate speed, the boot features a tongue-less design and a thin microfiber upper. The Neymar Jr. 'Written in the Stars' comes in all Mercurial models, meaning it will also be available in Superfly.

The design of the Neymar Jr. 'Written in the Stars' Mercurial is all about Neymar’s accomplishments. The first detail pays tribute to his debut goal as a member of the Brazilian National Team, against the United States on August 10, 2010, when he was just 18 years old. And second, last summer’s triumph in the Olympics — acknowledged via reference to Maracana Stadium. Brazil’s five stars appear on the boot as well.

“Growing up in Brazil, football is everything,” says Neymar Jr. “I am very proud of my country and I hope they are proud of me too.”

Several of Neymar’s significant club goals are also commemorated on the boot, starting with his first goal as a member of FC Barcelona on September 24, 2010. The boot also marks his first goal against Real Madrid on October 26, 2013 and Neymar Jr.’s goal in the 2015 Champions League Final. Upon close inspection, one can see the “constellations” on the boot depict the path the ball took in the build-up to each of the goals referenced.

Additional goals that are personally meaningful to Neymar and are marked on this boot include his 100th career goal on his 20th birthday and his legendary goal against Villareal, on August 11, 2015. Neymar scored in the 85th minute of the game by flicking the ball over his opponent’s head and striking it into goal, amazing everyone in the crowd and across the world. That daring yet joyful style of play is further captured on the lace aglets of the boot, which read “Ousadia” and “Alegria” (“daring” and “joy” in the player's native Portuguese).

All in all the Nike Neymar Jr. 'Written in the Stars' Mercurial is amazingly fresh. It almost seems unreal with all the details on the boot. Definitely a boot for every Neymar fan in the world, and for everyone who has a dream to become a star player. Just like Neymar had.

Neymar Jr.'s 'Written in the Stars' Mercurial launches July 28 at Nike Miami and is available July 29 on Unisport.

Don't miss out when we launch these boots. Sign up here and be the first to know.