Bayern Munich are at the moment in Qatar, for their annual training-camp, where the players are enjoying the warmth, while they prepare for the rest of the season. We have kept a sharp eye on their training sessions and here we spotted something, that really caught our eye. Both Xherdan Shaqiri and Luiz Gustavo showed off their new Nike Mercurial Vapor boots  and we have the photos of course.

Just before the end of last year, Luka Modric and Alexander Büttner gave us a glimpse of their new Mercurial Vapor IX-boots in two different colourways. Now they have been joined, as a couple of Bayern Munichs players had jumped on the bandwagon and showed us their new boots. 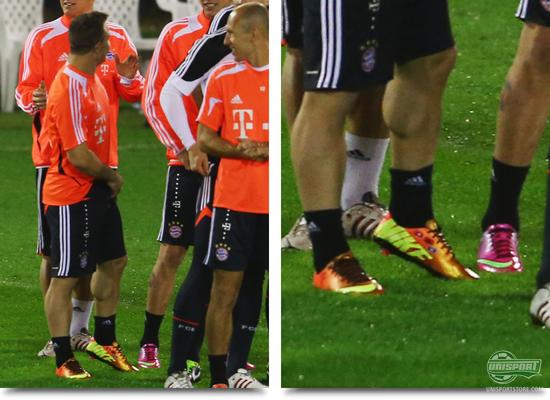 We had a look at Bayern Munichs training session from yesterday and the day before, and here Luiz Gustavo was wearing a pair of interesting, purple boots,  it is very conceivable, that it is the new Vapor IX. Something that really caught our attention, is the astounding resemblance it bares, to the colourway, that Nike launched the Superfly III in  and many of our users actually thought, that Modrics boots, were Superfly III's. 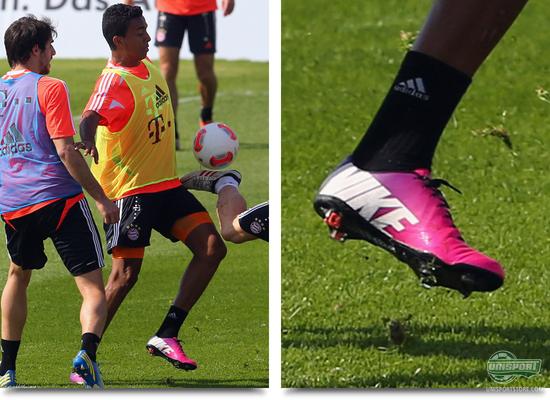 The construction looks a lot like the one we know and love from the current Nike Mercurial Vapor VIII, just as it looks like, that Nike are keeping the popular stud-configuration with just two studs on the heel. We do however take note of the upper, that is very shiny and almost glazed, which would point towards, Nike moving away from the suede-like finish, on the Vapor VIII. 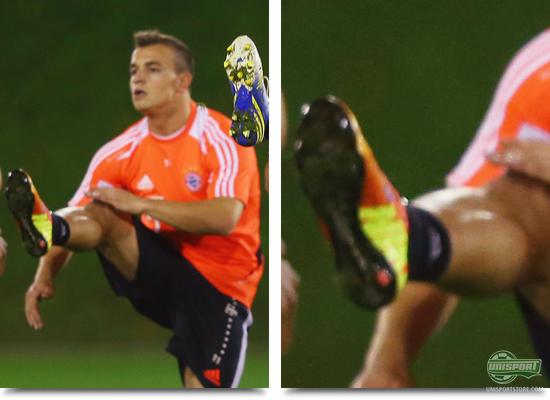 Another player, who pulled out his new Mercurial Vapor, is the Swiss mega talent, Xherdan Shaqiri, who has been a loyal Nike-man for most of his already lucrative career. His new Nike Mercurial Vapor was different to Gustavos and featured very youthful and exuberant colours, with orange and yellow tones dominating the landscape. The designs of the two boots, do look very similar and we are tempted to say, that the new Nike Mercurial Vapor will land in two colourways  exactly like its predecessor Vapor VIII. 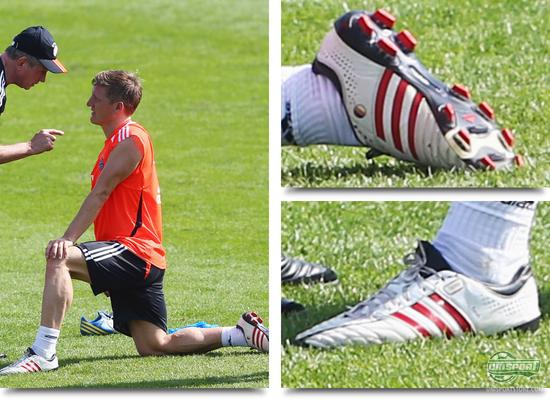 We also noticed Bastian Schweinsteigers boot choice and even though it is a boot we know very well, then it is still very interesting. The German midfield general has had his Adidas Adipure 11Pro specially tailored, so it in essence is an Adidas Adipure III in disguise. The stitching on the top is exactly the same and the material is most probably kangaroo leather. Furthermore, the soleplate and stud-configuration is far from the Sprintframe, that normally resides on a Adipure 11Pro.

Things are really heating up in the Nike corner and we cant wait to unveil the new boot for you. On top of that, we also think it's crazy the degree Adidas have gone to, to make Schweinsteigers boots, but that's just one of the perks of being a pro. What do you say to the new Nike-boots? Is it something you are looking forward to? Let us know in the comment-section down below.