We are only just about a week into the new year, but we are already here with the second round of boot spots for 2013. It was a very eventful week, as Serie A and La Liga rejoined the English Leagues on our TV-screens. This naturally gave us the one good spot, after another and we have collected them all together for you here. 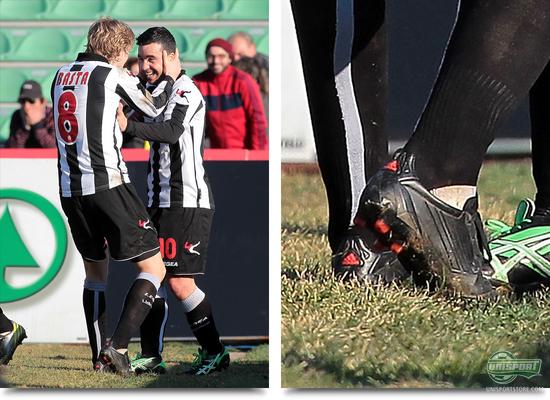 Dusan Basta (Udinese)  Adidas F50 Adizero Blackout We start off in Italy where the first round of Serie A football offered us a few surprises. Among them was Udineses comprehensive 3-0 victory against Inter Milan, who, before the game, occupied the third spot. In this game we caught Dusan Basta, who, on top of having a brilliant name, could also boast an awesome choice of boot. Blackoutted boots are always a hit with most, but it is rare that we find them on the feet of the professionals. We don't expect him to use them very much, but none the less, Basta deserves plenty of respect for his Adidas F50 Adizero Blackout. 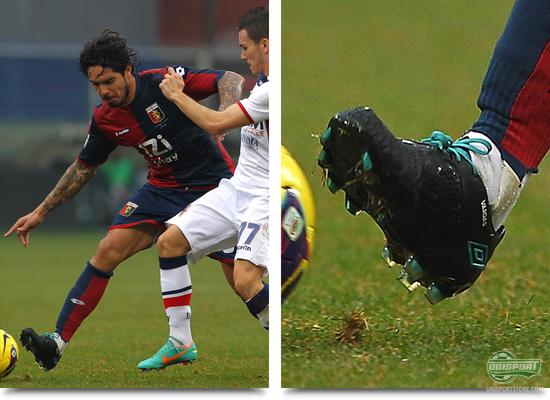 Juan Manuel Vargas (Genoa)  Umbro Geometra Pro II? We really chocked on our coffee, when we spotted this gentlemen in action for Genoa. We have recently raised a few question marks on the future of Umbro, as they have suffered great loses to their list of athletes. It would however seem, that the Englishmen at Umbro are yet to heist the white flag, as Vargas here aired a pair of boots, that we are hesitant to definitively name. He has previously represented the Umbro Geometra Pro, so maybe we are looking at a new generation? 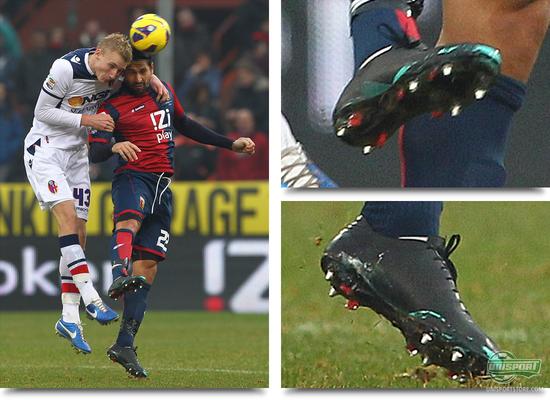 Marco Borriello (Genoa)  Nike Mercurial Vapor VIII ACC Retro/Total Orange/Challenge Blackout(ish) There is hardly a club in Italy, that Borriello hasn't played for. The nomad of a footballer has however delivered everywhere he has been - he knows how to find the back of the net. He has also been a pilgrim on the bootmarket, where he has played in countless different brands and models. For the time being it looks like he is back in Nikes Mercurial-collection and their Vapor VIII. The colourway doesn't look to have impressed him much , as it looks like he has had the boot-ink out and blackoutted his boots  half-heartedly. 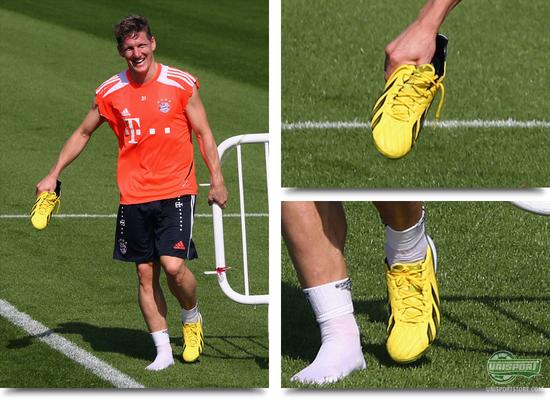 Bastian Schweinsteiger (Bayern Munich)  Adidas F50 Adizero Yellow/Black When it comes to boot controversy, no one is more prone than this man. Schweinsteiger kept a hold of his Adidas Adipure III throughout the summer and when he finally changed to Adipure 11Pro, it was a custom boot, that only had the appearance in common with the name. Now he is back to shock us all, as he shows off a pair of Adidas F50 Adizero Yellow/Black in Bayerns training-camp in DOHA. Is this not a bit of a strange one? 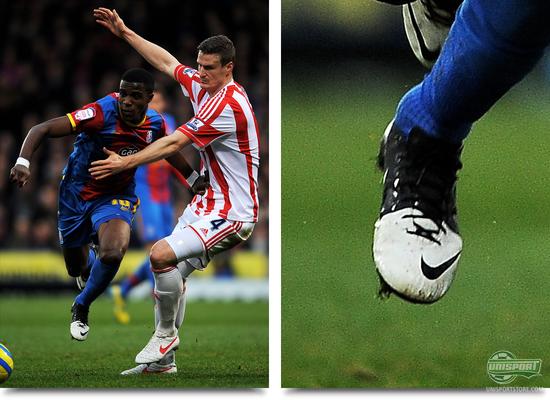 Wilfried Zaha (Crystal Palace)  Nike GS2 ACC White/Black In good old England it was time for the third round of the prestigious FA Cup. It's famous for letting the smaller teams really try to have a go at the bigger teams and it was here, that Championship-club Crystal Palace had to battle with the muscle-men from The Black Country, more specifically Stoke. The game finished goalless, but this wasn't going to keep us from spotting the prodigy Wilfried Zaha. The fleet footed Englishman have the usual Nike Mercurial Vapor VIII a break, to début his new Nike GS2 ACC White/Black  Good style. 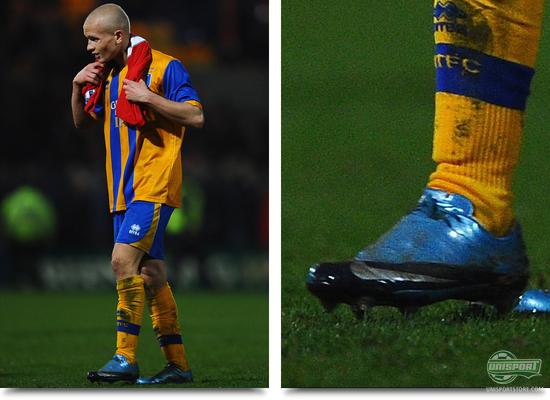 Lindon Melkie (Mansfield)  Nike Mercurial Vapor V Orion Blue/Metallic Silver/Obsidian black In Nottinghamshire you will find a football club with fighting spirit like no other. The local team may play five divisions below the Premier League, in the Conference National, but it seems someone had forgotten to tell these boys. In any case they were not far from knocking Liverpool out of the FA Cup, but as so many times before, luck often favours the big teams and a refereeing howler saved The Reds, from a blushing scoreline. Mansfield did however win the best boot spot of the game award and we want to applaud Lindon Melkie, who sported a pair of classic Nike Mercurial Vapor V Orion Blue/Metallic Silver/Obsidian black for the special occasion. 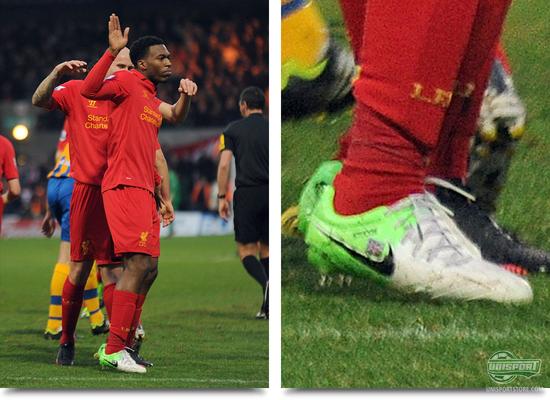 Daniel Sturridge (Liverpool)  Nike T90 Laser IV Clash White/Green One of the January-transfer windows first big signings was the striker Daniel Sturridge, that left the comfort of the Chelsea bench, for the prospect of a spot in the Liverpool line-up. The Englishman definitely got an excellent début, as he, cool as you like, opened the scoring. Later on he missed a sitter and got himself booked, but he showed flashes of his massive potential. Sturridge looks to be keeping his Nike T90 Laser IV Clash White/Green, that came in connection with the EURO 2012, so maybe he should change them soon? 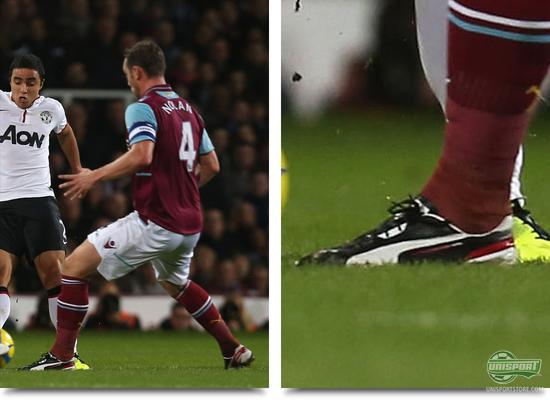 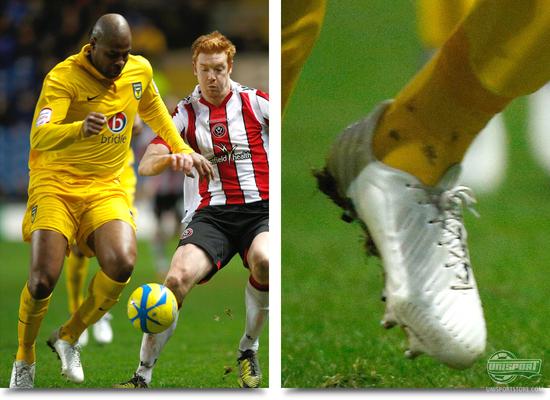 Michael Durberry (Oxford United)  Adidas Predator LZ Whiteout In the same way as blackoutted boots have their own group of devoted fans, the whiteoutted have the same. Here the 37-year old, former Chelsea player, Michael Durberry shows off an elegant example. He has most probably designed these Adidas Predator LZ himself and all we can say to that is kudos, because it looks incredibly good. 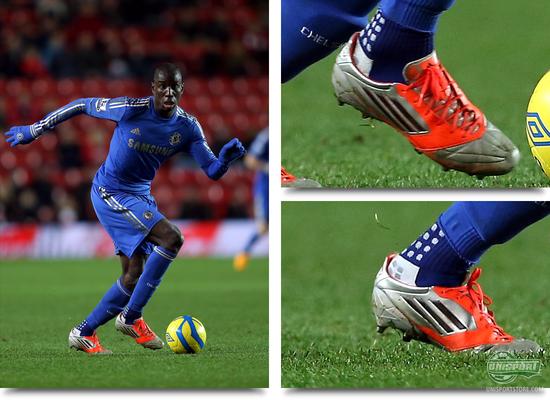 Demba Ba (Chelsea)  Adidas F50 Adizero Silver/Orange & Blue Trusox It is safe to say, that most Chelsea fans are very pleased with their latest acquisition. In his début he netted twice and gave the clubs fans a taste of his immense ability. He did so in his trusted Adidas F50 Adizero Silver/Orange and what do you know, he's also wearing a pair of blue Trusox. This would indicate, that a new range of colours is on its way and we will naturally do everything to get them here. 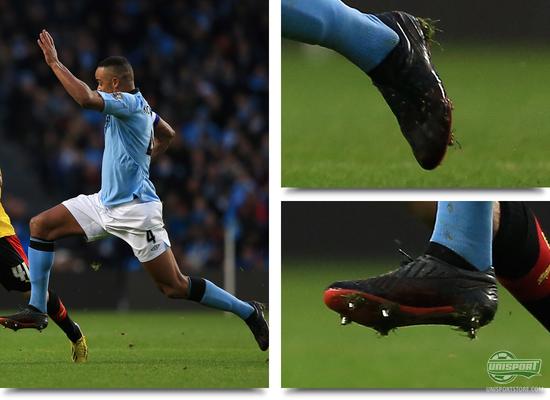 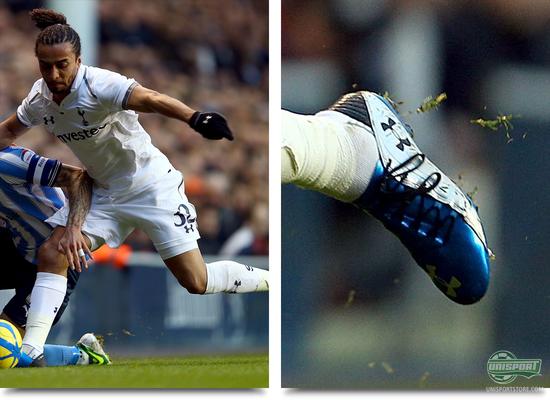 Benoit Assou-Ekotto (Tottenham)  Under Armour Spine Blur Carbon III Blue/Silver The Cameroonian leftback has for quite a while had our attention, because of his crazy boot habits. This has given us everything from a different boot on each foot, to exciting test boots, but now it seems, that the American brand Under Armour have swayed Ekotto to the latter. He is now playing regularly in the American boots and more specifically the new Under Armour Spine Blur Carbon III, that weigh just 177 grams. 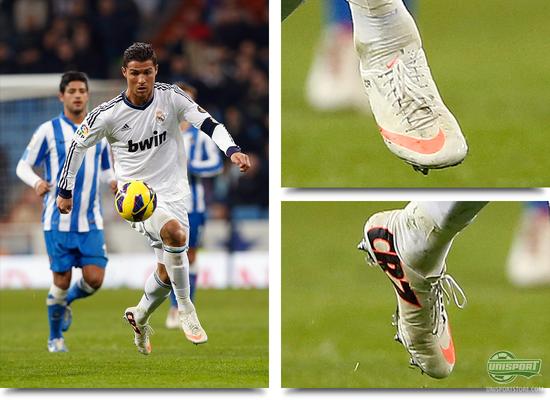 Cristiano Ronaldo (Real Madrid)  Nike CR Mercurial IX White/Pink/Black We round of this round of boot spots, with the biggest talking point in boot news lately: Cristiano Ronaldo. The prolific Portuguese was recently celebrated by Nike for his fantastic 2011/2012 with an exclusive colourway, that there will only be made 100 pairs of worldwide. They got their début against Real Sociedad and here the king-club got off to a terrible start. At 2-2 and with a man down, there was only one man who could save them and that was CR7. Two fantastic goals later and the dream début, as well as 3 points, were in the bag.

It was a strong showing in this weeks boot spots and we look forward to many more, now that all the big leagues are restarting. We can't determine a favourite spot this week, but maybe you can help; Which is your Spot of the week? Did we miss anything? Share your comments in the box down below.