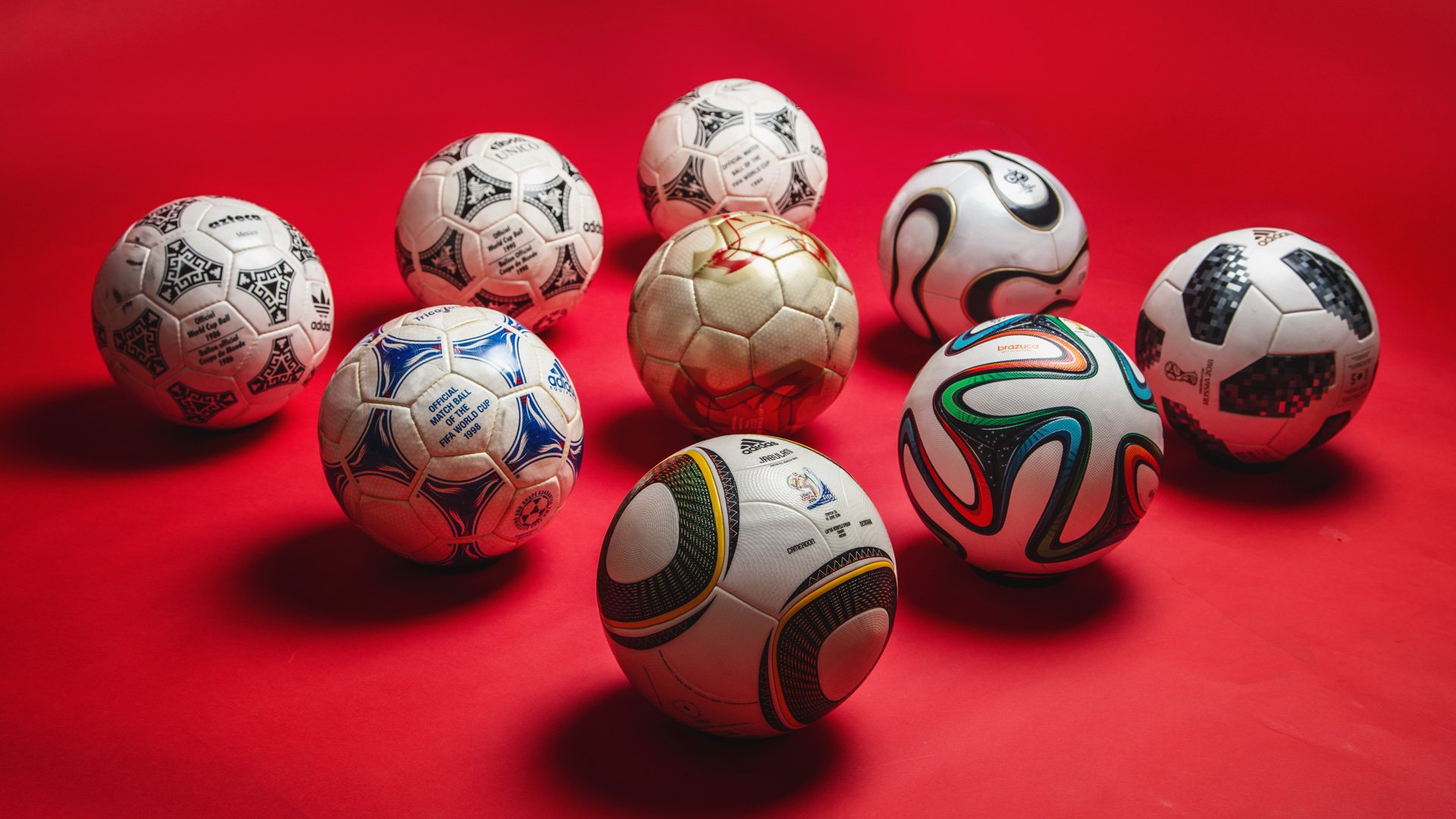 When the World Cup arrives a lot of new gear and products also does. We see new boots, colourways, shirts and one of the important thing the World Cup ball. We have gathered all the latest World Cup balls from 1986 until this years World Cup ball, to give you a complete overview of the history!

The first balls of our World Cup football history is the traditional Azteca, Unico and Questra. All of the balls are built the same and vary a little bit in the technologies, while they all have their own unique history. The Azteca was used for the 1986 World Cup in Mexico, and was the first polyurethane coated ball, which made it rain-resistant and the first synthetic matchball. The main design was inspired by the host country’s, Mexico, native Aztec architecture and murals and is incorporated in the triad patterns of the ball.

Moving on to the 1990 World Cup in Italy, we almost see the same ball in terms of design and technology. The Etrusco football was the first ball with an internal layer of black polyurethane foam, while the design of the ball paid homage to the host country’s history and fine art of the Etruscans. The lionhead placed on the ball, was also featured on the adidas Etrusco football boot’s tongue to give a complete World Cup design.

The 1994 World Cup football, Questra, was something unique. Compared to the Etrusco, the Questra was enveloped in a layer of polystyrene foam. This made the football waterproof and allowed it to get a greater acceleration when it was kicked. It felt much softer on the touch, and had an improved ball control and higher velocity during the games. The 1994 World Cup was in United States, and the triad pattern had a space themed decoration, which represented the high velocity rockets and United States' quest for the stars. This was made due to it was the 25th anniversary of the Apollo 11 mission, which was considered as one of the most important moment of the United States' history.

We are slowly moving in to more modern designs and the usage of colours, which, in my opinion, actually makes the World Cup balls more unique and special. The Tricolor balls was used for the World Cup 1998 in France and had the French red-white-blue tri-colour design theme in the triad pattern. This was actually the first official coloured World Cup ball and used a underglass print technology with a thin layer of synthetic foam.

Now, moving on to what might be the most iconic World Cup ball of all time. The Fevernova World Cup ball from the 2002 World Cup in Korea & Japan. The ball was made from thicker inner layers, which increased the accuracy of the ball’s flight. Furthermore, it also included a refined syntactic foam layer that allowed a more precise and predictable path while in the air. The Asian culture was the inspiration of the iconic look, and this ball might one you never seem to forget again!

The 2006 World Cup in Germany was the introduction of the Teamgeist. The ball was now completely remade in terms of design and technology. adidas made a new configuration which reduced the amount of panel touches, so you got a more smooth and perfectly round upper on the ball for more accuracy and control. Before the introduction of the Teamgeist you would have balls that were different on the upper due to the construction. The propeller design of the Teamgeist would help to minimize these imperfections and give a smoother upper. As something special adidas also made a World Cup finale ball changing the Teamgeist into a final ball with gold design.

The South Africa World Cup in 2010 gave us the Jabulani, which created a lot of attention due to flight of the ball. I can still remember Tshabalala’s screamer in the first game against Mexico, while the vuvuzelas blew the roof of the stadium, out of this world! The Jabulani was made with a new grip n groove technology, which should have given the ball a more stable flight and better grip in all conditions. Furthermore, it was also the first time that 3D bonded panels was used on a ball, which would make the Jabulani more round. The design praised South African heritage and Jabulani meant “celebration” in Zulu.

The Brazuca was the latest World Cup football for the World Cup in Brazil. Made with a 6-panel design giving the ball an improved grip, touch, stability and aerodynamics. The Brazilian people had a close connection to the ball, due to they voted for the name of the ball. With the involvement of 1 million soccer fans in Brazil the ball was named Brazuca after a public vote. Brazuca was an informal term which meant ‘Brazilian’ and also described the Brazilian way of life. Everything on this ball was representing Brazil and you might just say that this is in the top of the best World Cup balls ever made!

The last World Cup ball on our list is this years Telstar ball. The 2018 World Cup ball Telstar is made with a new panel design and updated graphical coating for an improved performance and durability. The textured upper improved the grip, touch and aerodynamics, while the Telstar is also thermal bonded to give a more stable flight in the air and a predictable path as well as a low water intake. The Telstar uses the first World Cup ball as inspiration, which also was the first World Cup ball to be broadcasted live on television. The ball was made black and white, so it could be seen better on TV, and it was also a ball which was named ‘star of television’ due to it’s TV debut and hence the name Telstar!