The World Cup is just around the corner and for some this is sanctuary that arrives every fourth year. But for others this might be their first time following a World Cup. Maybe you’re a young one who is following the World Cup for the first time, or maybe you’ve never considered spending time on the World Cup and have decided it’s time for it now. No matter what we’ve got you covered with our World Cup for beginners.

Let's start with the basics of the World Cup. Each fourth year 32 nations fight to win the World Cup trophy. 31 countries qualify through qualifications matches, while the host nation is directly qualified. This year the host nation is Russia and they will play the first match against Saudi Arabia on the 14th of June at Luzhniki Stadium in Moscow. We are going to see 48 group matches, and a total of 64 matches with knockout stages, throughout 12 different stadiums in 11 Russian cities. To start off the World Cup we are going to have 8 groups playing their games where the top 2 team from each group proceeds to the knockout stages. From there it’s win or go home, until the World Cup champions has been found on the 15th of July.

But with a total of 211 nations battling for qualification for the tournament, a lot ended up short to get to the World Cup. Traditional big nations such as United States, Netherlands, Chile, Cameroon and Italy are some of the nations we aren’t going to see in Russia. But other teams have made history by qualifying for the World Cup. Take Iceland for example, they will contest for the first time ever, and they will also be the smallest country to qualify in the history of World Cup, with a population of 335000. 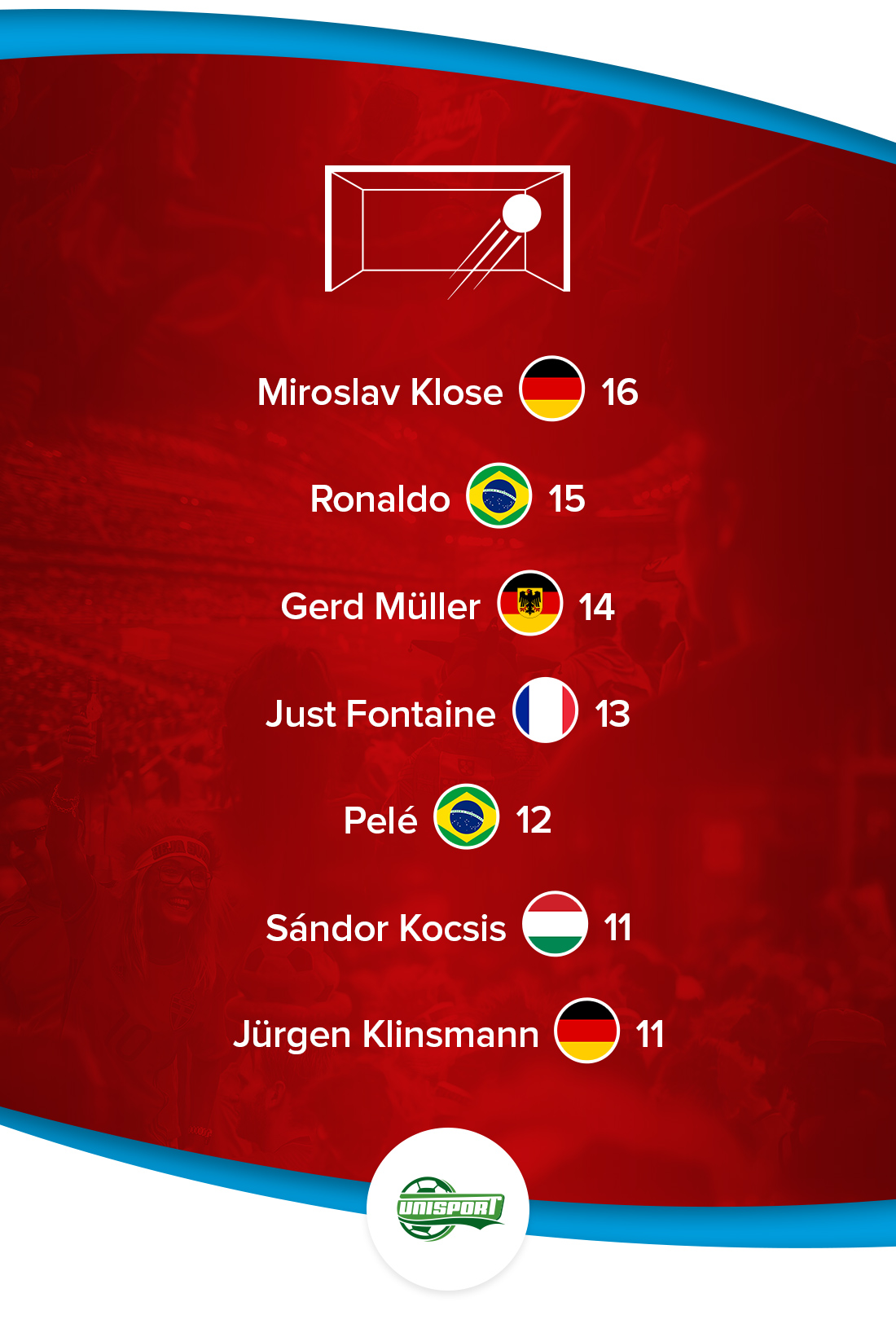 With a lot of different nations throughout the years, we also got a lot of different top scores. All of the players on the list have been some of the most lethal attackers known in football. Just Fontaine might be the one with the best track record of them all, because he scored all 13 goals in a singel World Cup tournament in 1958, what an achievement. At the moment we have Miroslav Klose on the top of the list, but his record might be broken by his fellow countryman Thomas Müller, who at the moment has 10 goals and only need 7 goals to be on the top of the list.

Besides the top scorers, we also have a lot of other mentionable players that are going to participate at the World Cup. The World Cup is known for making new stars, and this was the case for James Rodriguez from Colombia, who took the World with storm during the 2014 World Cup in Brazil. He is of course going to play with Colombia this year as well, but French players such as Pogba, Mbappé and Griezmann are also some you should keep you eye out for. Going a bit more south we also have to look out for Spain and their magician Isco, who might be one of the big players for the World Cup this summer. But Brazil and their players are always favourites to snatch the trophy, and this year is no exception. The biggest profile at the tournament Neymar Jr. will lead the Brazilian squad throughout the World Cup, and the squad has some interesting players such as Coutinho, G. Jesus, Marcelo and many more!

But when these players win the World Cup with their nation, what do they get? Well in the 1930 and until 1970 the Jules Rimet Trophy, originally called Victory but changed name to honour the FIFA president who dreamt about the World Cup, was given to the Champions. But the trophy got stolen and therefore, a new trophy was made called the World Cup trophy, which is 37 centimeters in height and weighs 6,1 kilograms. It’s made from 18 carats of gold and covered with a malachite base, while also depicting two human figures that holds the earth. With other words, it’s the most iconic trophy in all of sports. Furthermore, the players also get acclaims, medals, hero statuses in their homeland and a nice financial bonus.

But should you know more before heading out to watch the World Cup? There might be some smaller details. This year a new technology will be introduced to the World Cup. The so-called Video Assistant Referees (VAR) will be used to help referees to avoid making potentially match deciding mistakes. We have previously incidents where VAR could have come in handy, such as Frank Lampard’s disallowed goal against Germany, which was approximately 1 meter behind the line, or Kaka’s red card where Keita deliberately ran into Kaka, so he would be awarded a red card. Another mentionable accident was Rivaldo’s actor skills against Turkey, which sealed Hakan Unsal a red card. Many people are sceptic about the VAR, because it has not been used in all leagues around the world and only been tested on some. Therefore, many referees will meet at the World Cup with no experience, and this might lead up to some funny moment this summer.

One of the more important topics for the World Cup is also who is going to win the trophy? As per usual Brazil is always seeded as the favourite to win the trophy. Looking besides them, we might take Germany, Spain, France or Argentina in the next line of favourites. But if you are looking to take your knowledge to the next step or use it for a conversation with other football fanatics, you might pull out Uruguay as an underdog for the World Cup trophy. They have a nice blend of offensive and defensive players and also a lot of profiles such as, Edinson Cavani, Luis Suárez, Diego Godin and many others. Their way to the final isn’t the hardest, and they could surprise against the bigger teams in the quarter and semifinals. But you can’t say World Cup without Ronaldo and Portugal, and you might also have to keep an eye out for them since Ronaldo might be doing everything he can to seal the missing trophy in his collections.

Well, this was our introduction for the World Cup, we hope this could enlighten your knowledge and interest for the World Cup and make the event even funnier to follow with your friends or by yourself!