In Unisportstore we strive to give you the best and most complete football experience possible and that is why we always try to bring in some of the smaller brands. We have once again succeeded in this and can now reintroduce the Japanese brand Asics in Unisportstore, with their new top boot Lethal Tigreor 5 White/Black/Red, which lands in three new colourways  you can learn all about it here. 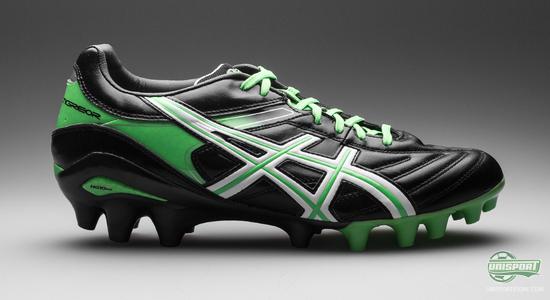 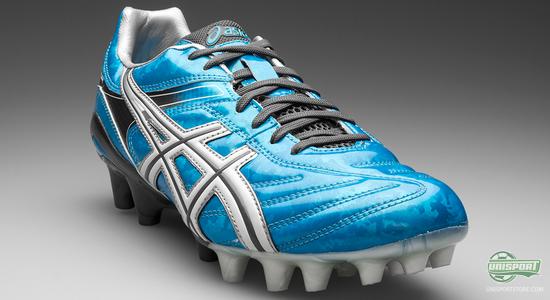 Asics are widely recognised as one of the best running brands and this is definitely also something that is reflected in their Lethal Tigreor 5  the latest generation of their popular Lethal Tigreor-collection. 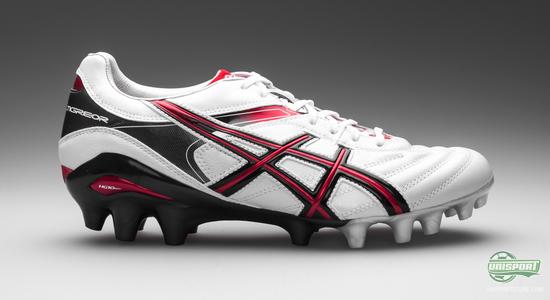 Lethal Tigreor 5 is especially popular in the Serie A, where the Italian striker Antonio Di Natale from Udinese is one of the brands strongest profiles.

Tigreor has always been about comfort, fit and an innovative and extremely well functioning outsole, as well as, a great stud-configuration. It is the fifth in line, but has in no way forgotten its roots and Asics have even built on the already excellent stud-configuration and last. 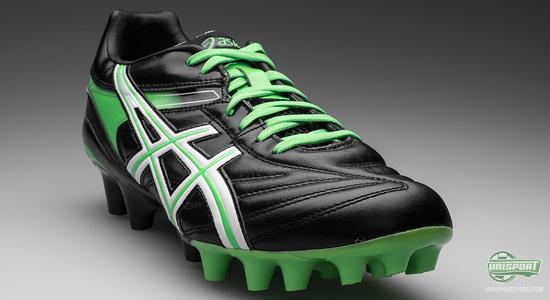 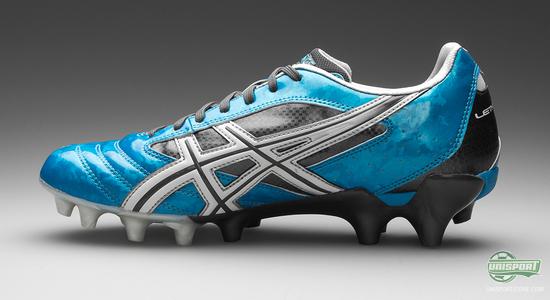 The boots upper itself is made with a mixture of kangaroo leather, microfibre and synthetic leather. The front foot is fitted with the soft, supple and relatively padded piece of kangaroo leather, which is designed to wrap itself around the foot like a glove and give a phenomenal comfort. 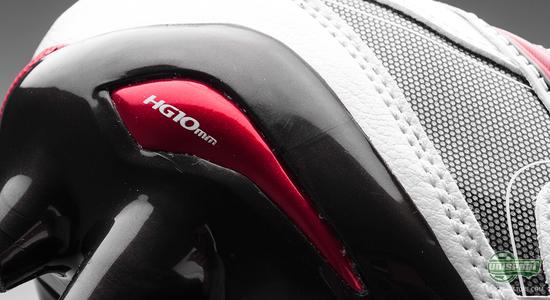 The mid foot is made with a leather emulating piece of synthetic and microfibre, which gives stability and keeps the boots weight as low as possible. 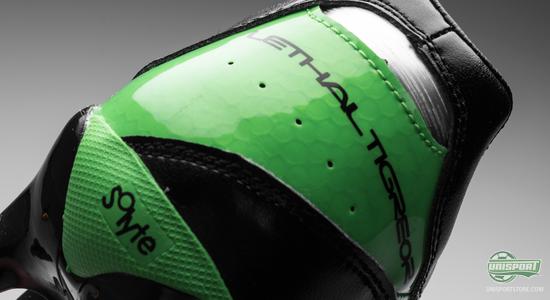 The boots last is shaped to give exactly what a player needs  a streamlined, narrow front foot, which gives a tight fit and ensures you have direct contact with the ball. It has a broad mid foot and heel to give optimal protection and support.

Because of this you get the best of two worlds and this really exemplifies how much Asics care about the foots movement and needs. 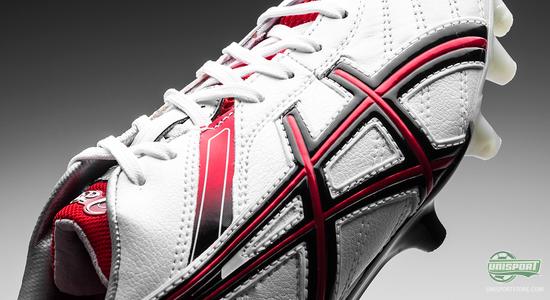 The sole and stud-configuration on the Asics Lethal Tigreor 5 is the result of tireless research on the foots anatomy by the Japanese giants  and as a result of this they have found out how the foot twists and turns, so they know where to give it support. 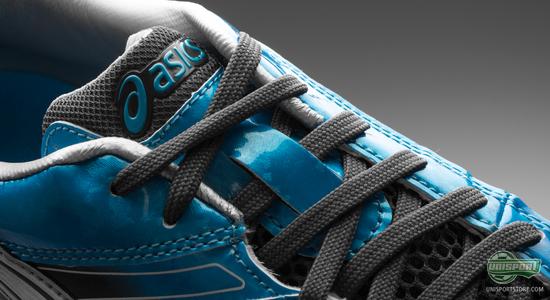 This infamous support is acquired in two ways. The first is the shock absorbing, but still very light material, Solye 65, which has been fitted into the heel, to make it more comfortable to run in. The second is that Asics have fitted a 10 mm heel gusset into the boot, so you get a more athletic posture. 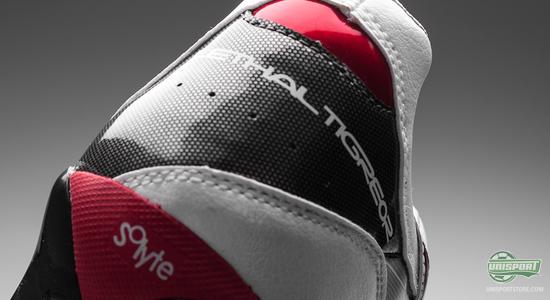 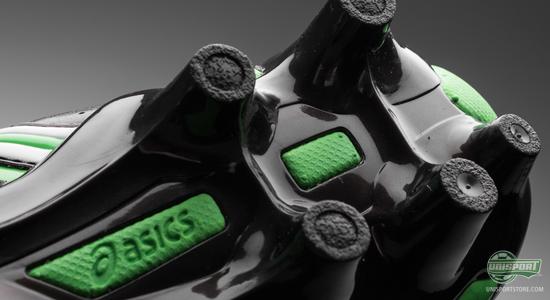 Because of this heel gusset you are raised a little, which helps to ease the pressure and tension on your calves, knees and ankles. Asics have used their experience from running shoes and the introduction of the gusset is an excellent way to counter injury and increase the comfort of the Lethal Tigreor 5 considerably. 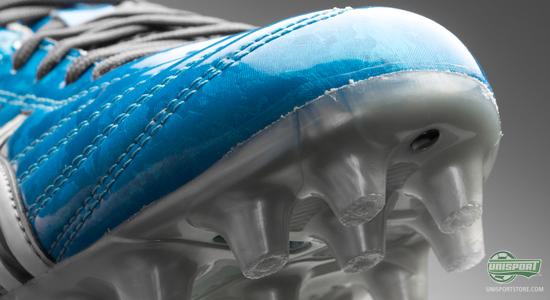 The stud-configuration is made with more studs than you normally see on FG boots and this is a very conscious decision from Asics. This is because they wanted the Lethal Tigreor 5 to give good acceleration, manoeuvrability and stability.

Acceleration is helped by the boots 5 front studs, which make sure you have complete contact with the ground right until you kick off and this is to make sure you get the most out of your efforts when running. 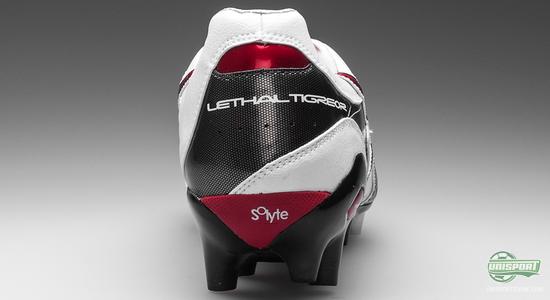 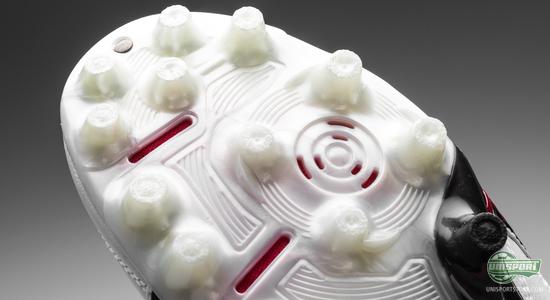 Beneath the front footpad there are four studs, which is the central zone for facilitating quick turns  these studs make your small jinks and twists much easier and less detrimental to your joints. Furthermore, the heel has been given an extra stud to give more stability.

With the Lethal Tigreor 5 Asics are really sending a signal of intent and that they too have some interesting technologies up their sleeves. With supreme comfort and optimised running stature, the Tigreor is a very intriguing alternative to the more commercially popular boots. What do you think about the Asics Lethal Tigreor 5? Share your thoughts in the box down below.