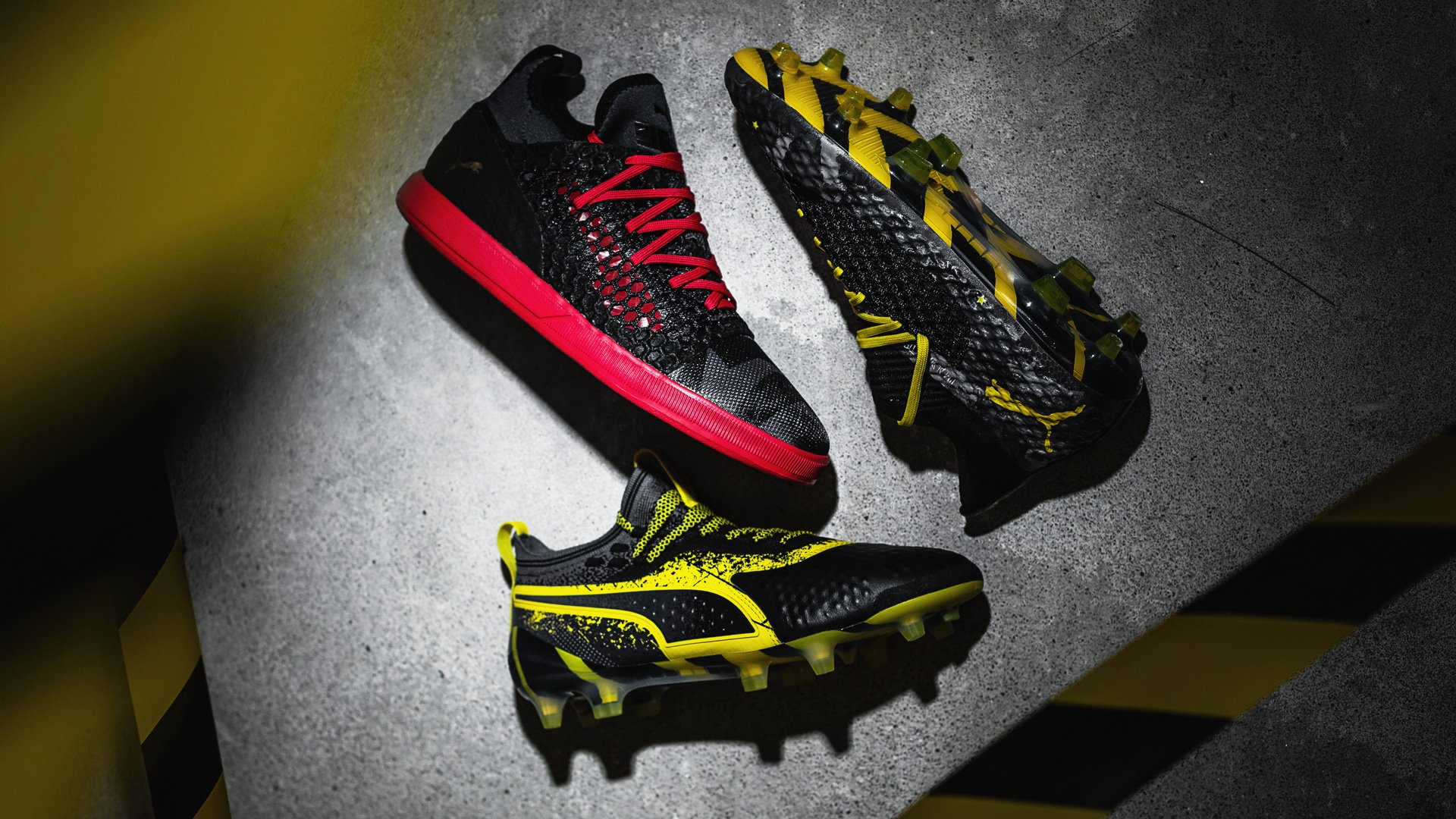 Yes, you got it right the first time. We have made our own pack in a collab with PUMA, and we're really proud to present the beautiful boots to you. Dominated by black, yellow and red vibes, the brand new Unisport x PUMA ONE, Future and 365 Netfit Lite Freestyle are inspirered by the transition from darkness to light.

Emerging from the gloomy back alleys of Copenhagen, into the floodlights of the biggest arenas. Drawing inspiration from the concrete of the Copenhagen city streets and paying homage to the city in which we were born and moulded, before breaking out of the shadows. And besides looking damn cool in the eyes of your trailing opponent, the road sign inspired pattern on the ONE's and Future's soleplates symbolise just that. With designs from Joltter, JayMike and PWG, Unisport and PUMA have collaborated to create the Copenhagen City Pack. Check out the beauties below.

To reach the top, you cannot sit still. You have to keep grinding - even if the paint is still wet. This will not stop you from dominating the streets. You are never finished, and the spattered design one the PUMA ONE Copenhagen City Pack will remind you!

With his love for details and customisation, the PUMA ONE obviously has a personal JayMike-touch. A bespoke monogram is featured on the bright yellow heel. But it isn't only JayMike who will suit up in these bad boys. Manchester United star player and PUMA athlete, Romelu Lukaku, will also lace up in the PUMA ONE Copenhagen City Pack, proving that JayMike has designed a boot a top athlete can't resist.

The PUMA ONE Copenhagen City Pack is like every other PUMA ONE made for the tactical player and the leader of the team, who needs just the perfect material to be the ONE who changes the game. The orange knitted FUSEFIT area will provide the customizable lacing needed, while also have a sock-like feel. While the textured leather upper will secure you the best possible upper to control the game.

Want to gear up like Lukaku or JayMike? Get your PUMA ONE Copenhagen City Pack boots right here, right now!

It wouldn't be a Joltter boot without some sort of camo on it. The sleek, toned down camo pattern on the PUMA Future Copenhagen City Pack is typically Joltter, and if you look closer you will find a pattern completely made from his passions in life. The PUMA Future Copenhagen City Pack is designed by the Joltter himself, and it's pretty easy to see when noticing the quote on the boots.

Joltter's charismatic quote brilliantly sums up his always-on mentality. An everlasting hunger for more, prevents him from ever slowing down. This indeed correlates with the DNA of the PUMA Future. The boot is made for the agile player, that take on any challenge with flair and stands out in front of the crowd. Like on the previous PUMA Future release, the NETFIT has been updated, which makes the lace holes a bit smaller giving you even more options to lace the boots like you want.

Gear up like Joltter, and get the PUMA Future Copenhagen City Pack right here.

Last but not least, the PUMA 365 Netfit Lite Freestyle Copenhagen City Pack has been designed by our freestyle king PWG. The origami pattern on the toebox and formstripe represents creative freedom, and infinite development. This pattern can go on forever, and will never reach a limit - much like the imagination of a freestyler.

The Copenhagen City Pack is about taking your game from the city streets to the biggest arenas. The dark grey tones on the upper, serves as a reminder of where it all begins; on the streets. PWG has become a true ambassador for the art of freestyle. His influence is massive and the golden PUMA cat on the heel illustrates his significant role in the community.