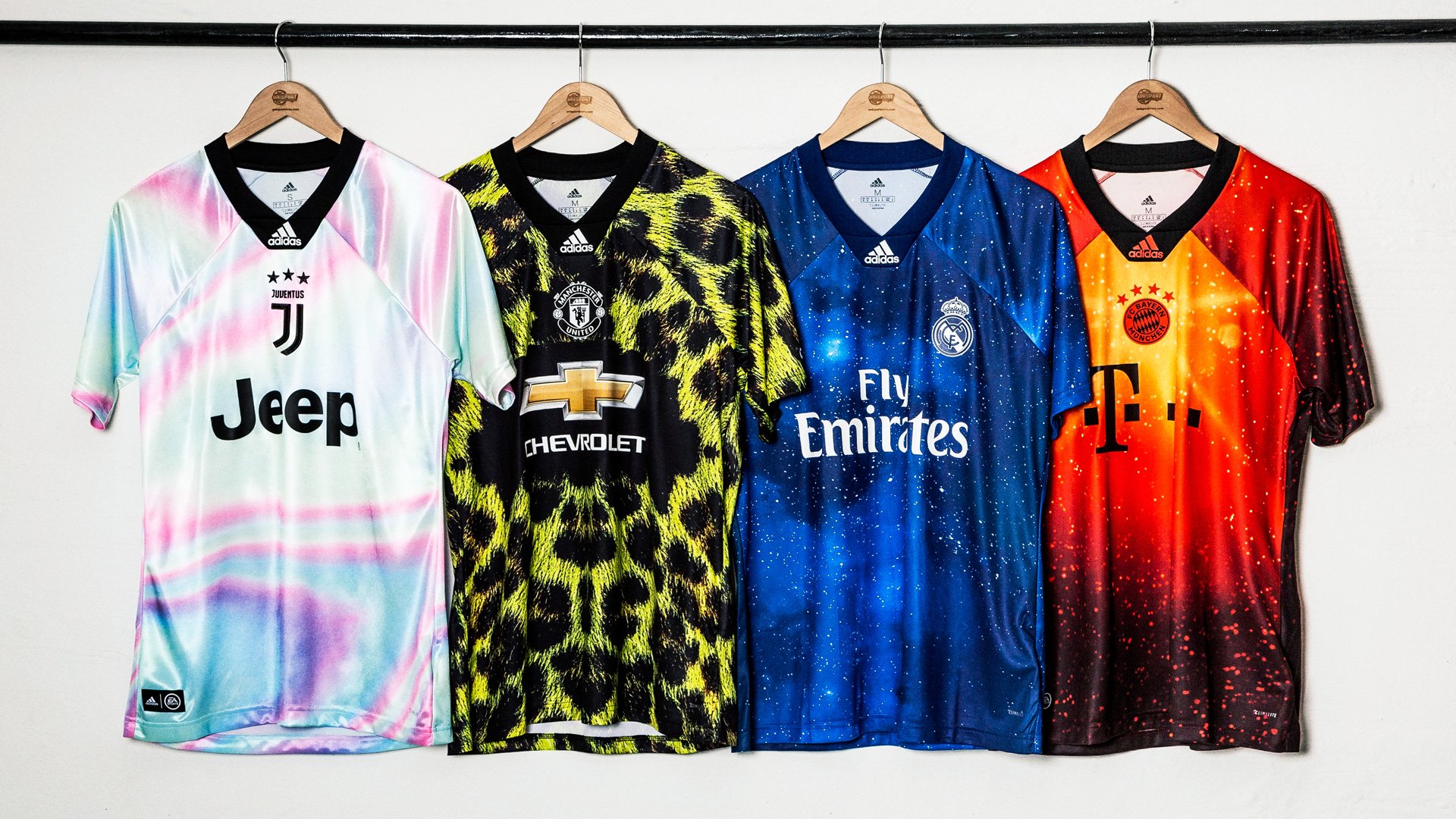 Electronic football and real-life football are being more and more merged. We’ve seen World Cups and boots in both worlds, and now it’s time to get Limited Edition shirts. Let’s take a closer look on the new adidas x EA Sports football shirts.

For the first time ever adidas and EA Sports will collaborate to make 4 Limited Edition adidas football shirts for four of the most popular adidas clubs in the world. The 4th kits will be featured in FIFA Ultimate Team, if you have selected Manchester United, Bayern München, Juventus or Real Madrid as your favourite club. But you can get all the shirts at Unisport, no matter what club you support, right now.

The Limited Edition 4th kits are designed to re-invent the look of the four iconic clubs, which gives the shirts their own personal and digital look, while they take inspiration from the club’s background.

The reigning champions’, Real Madrid, new 4th kit will take a step away from the tradition with a bold digital design. The Limited Edition shirt is made with a galactic design, as it refers to the club’s nickname: Galácticos, which is a gathering of highly skilled Real Madrid players, often top-shelf quality with a high price tag. The dark blue shirt features light sprays of white reflecting the Madrid night sky, which is also tributes the club with the many stars blessed with skills from another planet.

Bayern München is known as ‘Stern des Südens’, and their new 4th kit celebrates the connection and the team’s stars with a shirt made with a starry graphic. The graphics also represents the anthem that fills Allianz Arena on match days, while the Bayern München logo is placed in the middle, putting a greater focus on the club itself.

Juventus is a powerhouse in Italy, and they have a squad filled with superstars. This team only became better with their summer signing of Ronaldo. Juventus is born with forward-thinking attitude, which also has resulted in them winning the Italian championship 34 times, and they are on their way to the 35th this season. The new 4th kit is made with a mirror design, made in an iridescent look, reflecting their unpredictability in doing the unexpected.

The last 4th kit is Manchester United’s, which comes with a bold design, made perfectly for the 20th century. In the heart of Manchester, you find street trends and fashion, which has been used as inspiration for this shirt. The leopard print design is equal to Manchester United. It’s progressive, innovative and bold, and this is what you expect from the Manchester United team, while it also allows the players to be gamechangers on the pitch, or online when you are dominate the Ultimate Team mode!

Now is the time to strike, if you want to get a full look for dominating the virtual pitch. Get the same look as you favourite team and become one with them when battling in the Weekend League.

The new shirts are already available at Unisport now!
We use cookies to improve your experience, show you products you may like and save your cart. Continue if you're ok with this, or read more in our privacy policy.