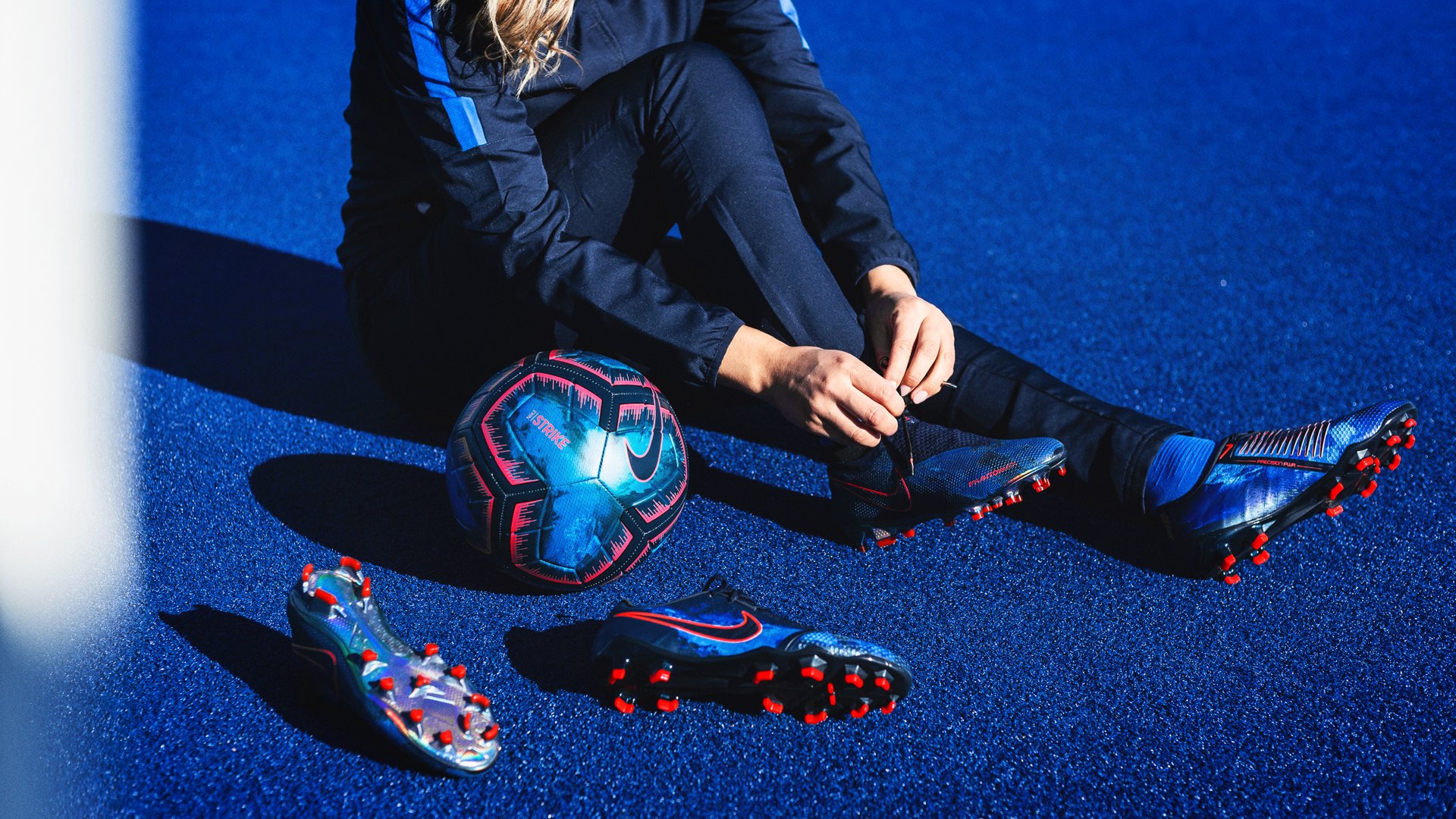 The Nike Fully Charged is made for some of the most lethal players in the game. It’s made for the players who choose to execute the game with their precision, giving their opponents no time to react. Get the Fully Charged Pack and become the Phantom of the game.

It’s time to score the decisive goal with the strike of your dreams, or set up your teammates with laser precise passes, which only you can do. We’ve reached the peak of the season and Nike is launching their Fully Charged Pack, which will be used by some of the most lethal Phantoms of the game during the next coming Champions League games. The Fully Charged Pack is made for the players who focusses on precision or power as their primary ability. The Fully Charged Pack will secure the popular Nike Football boots, Phantom Vision and Venom, a new and electrifying colourway, made with a blue upper, while an innovative foggy graphical design completes the look. The Fully Charged will make you remain an unsolved mystery for you opponents, who will end the game with Precision before it even started.

Last year we saw that Nike made a popular Strike Night event, where they invited some of the most lethal strikers in the game to a shootout competition. The line-up included Harry Kane, Marcus Rashford, Mauro Icardi and loads of other big Nike names, who all showcased the Hypervenom Phantom 3 Black Pack.

Nike is now ready to give their Phantom of the game a new colourway, which will light them up on the pitch during the Champions League matches, so expect players such as Marquinhos, Kevin De Bruyne, Thiago Alcântara and many other Phantom athletes to bring their A-game the next couple of days, as they battle for place in the quarter-finals.

The Phantom Series boots, comes with a new dark blue upper, that features a lot of awesome details. Let’s start with the Phantom Vision, which features the blue upper and navy-blue details on the Ghost Lace cover and collar. Furthermore, the Vision also features reddish colours on The Swoosh and control zone, which is the triangle that highlights the best possible place to hit the ball for a perfect pass or strike. The reddish details are also used on the studs, while the soleplate is very similar to the shiny Limited Edition Nike Phantom Vision EA Sports soleplate. Combine all these awesome features with the foggy graphical design and you will surely keep the mystique around your playstyle intact, until you unleash the Phantom


Learn more about the all new Phantom Venom boot here

The same blue and reddish details are also used on the Phantom Venom boots, which completes the Phantom Series for the Fully Charged Pack. The Phantom Venom is equal to the Vision in terms of design, but comes with a slightly different graphical design, as lightnings are featured on the boots. The graphical lightning strike design fits the Venom perfectly as it’s all about your strike, when you secure the crucial goals for your team.

The new Phantom Venom is a tech monster, which features a full Flyknit upper, that secures a great and dynamic lockdown, while also securing a larger striking surface. The asymmetrical lacing system also allows the boot to get a larger striking surface and lethal areas, allowing you to strike the ball as you want and still get a great shot. The Strike Zone on the boot is inspired by Nike’s golf clubs, which is visible on the polyurethane blades on the upper. This is added to create more spin and control on the ball, while keeping the ball down even if you miss hit the ball. The Honeycomb texture on the toe box gives and advanced ball control, while also giving a tighter fit for the best possible control in small areas on the pitch or during sharp touches.

Get Fully Charged with the new Nike football boots. They are available exclusively at Unisport from today, so grab your pair and get Charged up for your next match!


Find the Fully Charged Pack here
We use cookies to improve your experience, show you products you may like and save your cart. Continue if you're ok with this, or read more in our privacy policy.