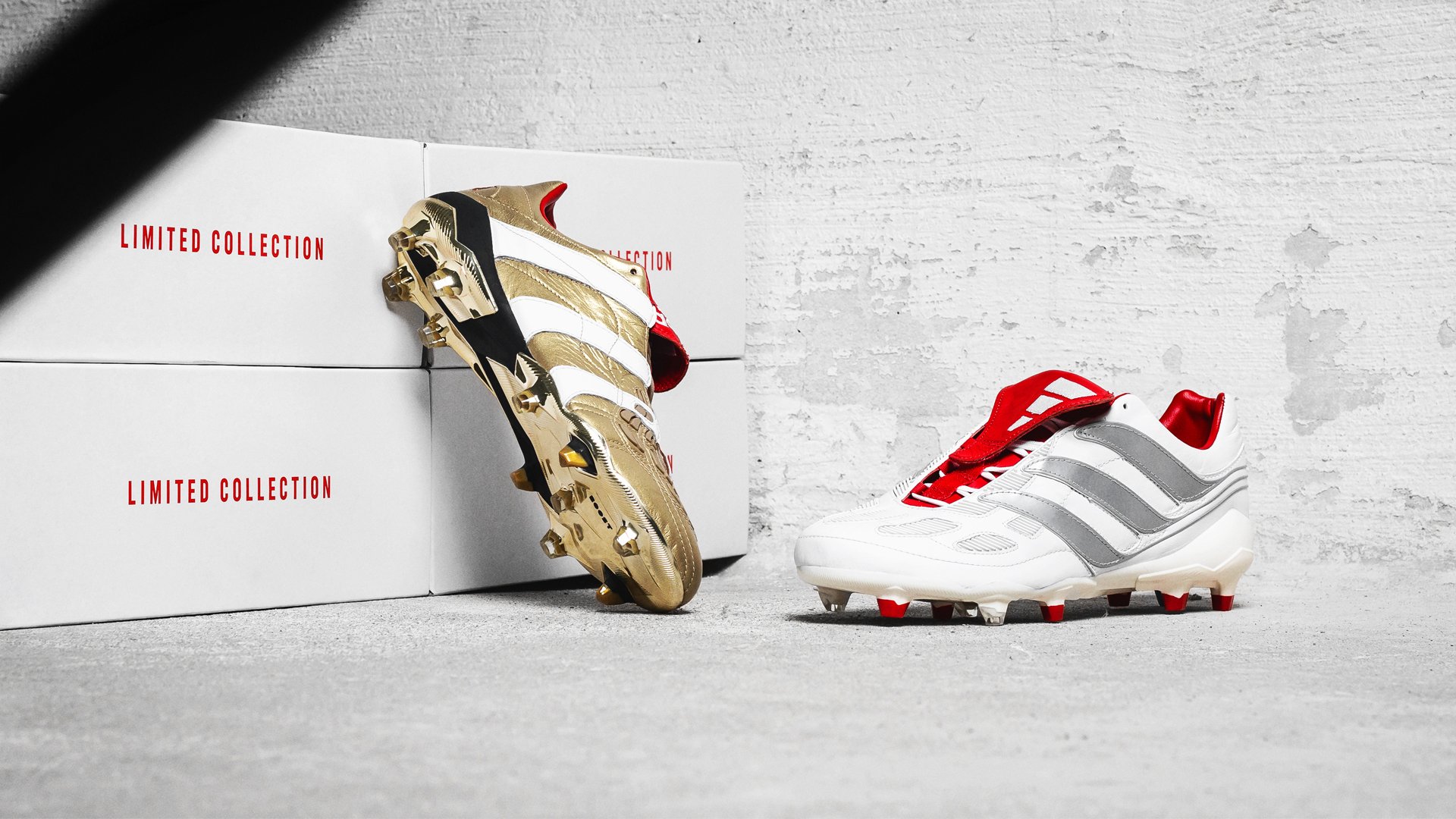 One of the most glamorous companions, monsieur Zinedine Zidane and sir David Beckham, are reawaken, as they’re synonyms for the Predator silo. The Predator football boots where for the first time introduced in 1994 and the rest has been history since, and we’ve seen some iconic colourways, which adidas have brought back.

25 years ago, adidas launched their first ever adidas Predator Football boot, which is a game-changer within the history of football boots. Now they are ready to celebrate the anniversary with a remake of two of the most iconic adidas football boots. The adidas Icon Pack is launching, what might be every collectors dream, a limited edition remake of David Beckham’s Precision and Zidane’s Accelerator boots. The Beckham’s boot is a remake of the boot he used when he made the unforgettable freekick goal against Greece in 2001. This iconic goal also secured England a spot to the 2002 World Cup, so you could say that there is a lot of history when it comes to this specific Predator boot.

Zidane’s Accelerator boots is a remake of the boots that he wore after the World Cup in 1998 and winning the Ballon d’Or, and the remake is made as a tribute. Each boot comes with stunning detail, so let’s not keep you stuck in history and take a closer look on the boots.

adidas never gave Zidane a golden boot to celebrate his Ballon d’Or victory, so this Icon Pack is made to make it up for him. The adidas Predator Accelerator ZZ Icon comes with blue, white and red details, which is a reference to his home country, France, while the upper is made in a predominantly gold upper. This upper is chosen, as it would have been the colour his Ballon d’Or boots would have been if he got them.

adidas has combined the traditional Predator look and upper, with an innovative soleplate, which also includes BOOST. The upper is made from K-leather, which is a 1:1 on the 1998 Predator boots. The K-leather ensures that you get great comfort and touch on the ball, so you can master the ball just like Zidane used to. To enhance your touch and control on the ball, adidas also included the classic K-leather vamp on the front of the boots. But the Predators wouldn’t be Predator without the classic fold-over tongue, which is also present on this remake.

To make it more personal, adidas has embroidered Zidane’s initials ‘ZZ’ on the heel, where they also have placed the updated ‘Predator’ text. It’s safe to say, that adidas is making up for not giving him a Ballon d’Or by giving him this sweet golden Predator Accelerator boots.

For Beckham adidas has taken inspiration from the iconic freekick against Greece in 2001, where Beckham sealed the qualification for the World Cup 2002. Here he played in the white and red Predator boot and adidas knows how much he loves white based football boots. All about these boots are screaming made for Beckham, as the classic fold-over tongue also is included on the white Predator Precision boots, while the three stripes are made silver, just as seen on the old boots from 2001. adidas also added the iconic rubber fins on the forefoot, which will make you able to add more spin and get a great touch to the ball. The updated soleplate is also added to the Precision, so you get the popular BOOST sole as well, while David Beckham’s initials ‘DB’ and the ‘Predator’ is included on the back of the heel to mark the celebration of the 25 years.


Browse through all adidas football boots

To celebrate it all with style, adidas also includes sneakers and training apparel to the launch of the boots. You can get the same iconic look off the pitch with these limited edition sneakers. The Accelerator boots will be accompanied by a navy blue and gold sneaker, which also included the fold-over tongue and K-leather forefoot. Beckham’s Precision will have sneakers that are almost 1:1 with the boots, making you rock the Beckham look on and off the pitch. It comes with the same iconic upper, fold-over tongue, rubber fins and 3 Stripes made in silver.

Get ready to celebrate the historical milestone, as the Predator Accelerator and Precision boots are available at Unisport from today. But, remember to be fast, as these limited edition boots are surely going to be copped fast, as they’re a collectors dream to own.