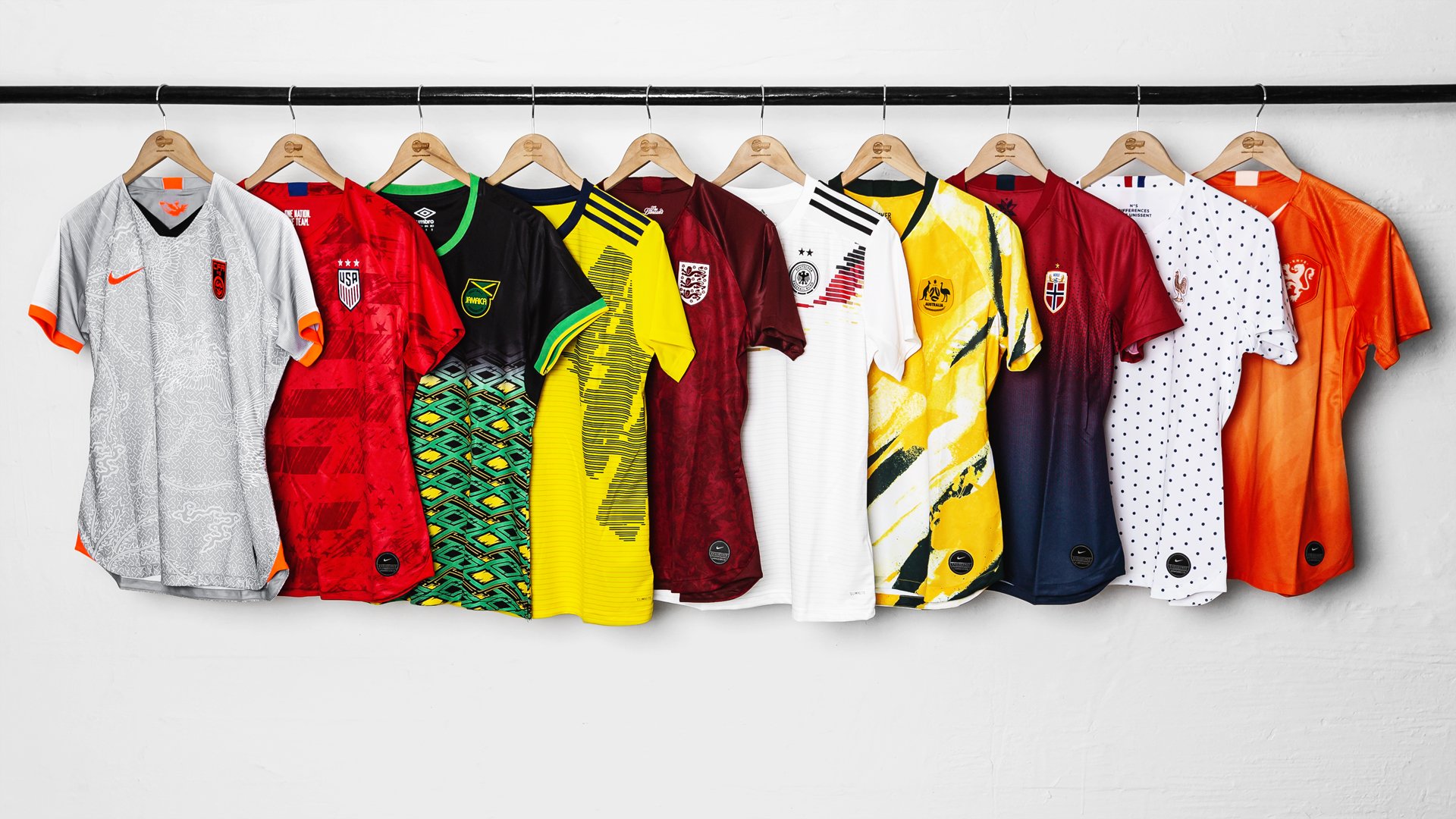 The 2019 Women's World Cup is getting closer. And we're so excited here at Unisport HQ that we've decided to rank the 10 best shirts in the tournament. Dig in!

Check out all of our 2019 Women's World Cup shirts right here.

First, let's just clarify the thoughts behind our selection of the Top 10 Women's World Cup kits. It's easy to do so by looking at the honourable mentions that almost made the list, but didn't because of our number 1 rule: the kit can't look identical to the men's version. This is why we don't have included cool shirts like the Nike Nigeria home shirt (a 1-to-1 of the 2018 Men's World Cup kit), just like the PUMA Italy and Nike Brazil home shirts. Cool looking kits - but just not good enough to make the list. And hey, rule number 2 is that each county can't be represented more than once on the list. Now, let's dig in to the Top 10 Women's World Cup kits:

Nike and the NFF have launched a stunning new 2019 women’s national team kit inspired by Norwegian heritage. Combining the team’s trademark colors of red and blue, the new home jersey features a pattern borrowed from traditional Norwegian ski sweaters. The result is a unique gradient aesthetic that decorates the front of the shirt. 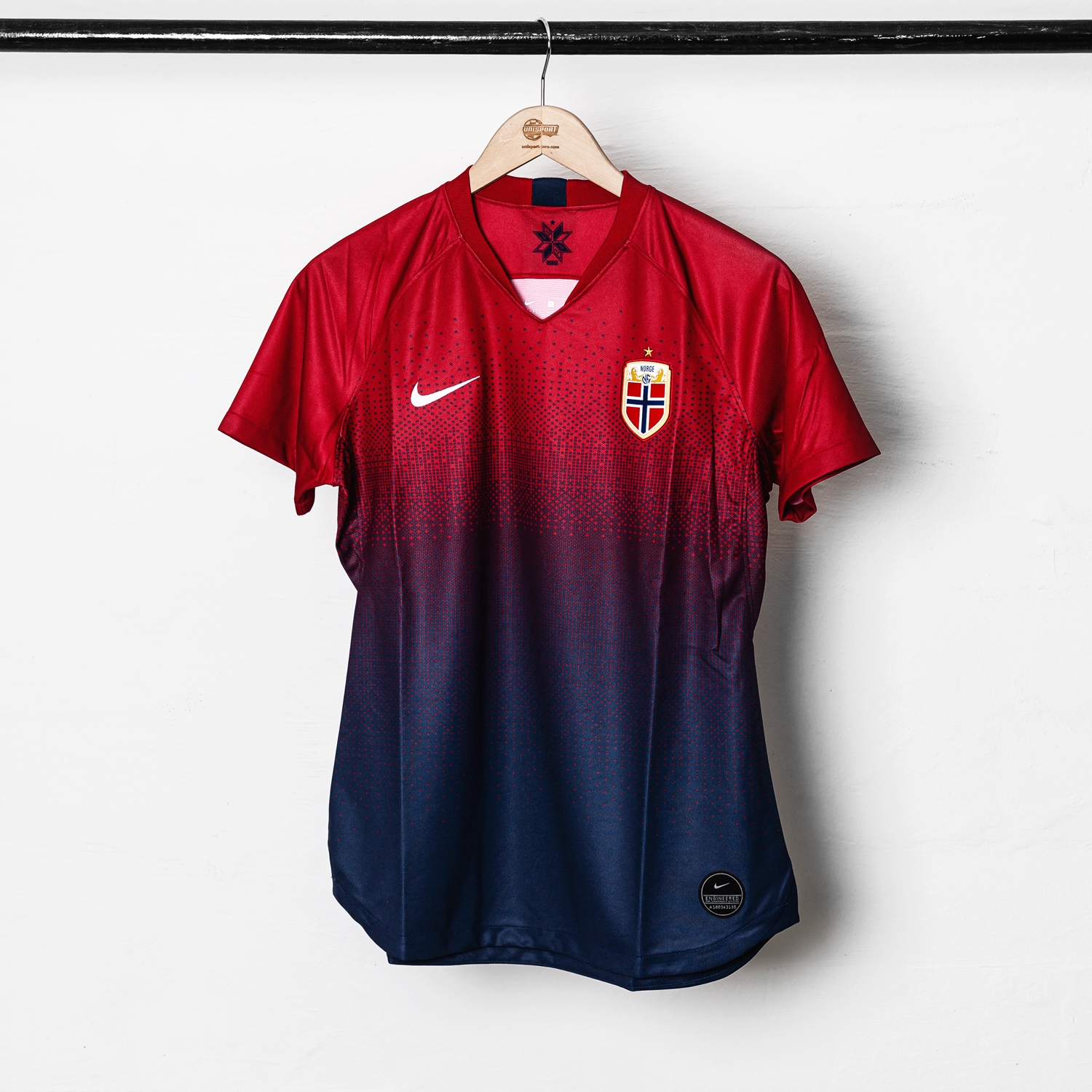 Holland's 2019 home kit relays a retro Oranje vibe, but with a contemporary, female-focused twist. The head-to-toe orange shirt, shorts and socks are adorned with an ornamental graphic inspired by the country's famed tulip and completed by the KNVB women's team's exclusive Lioness crest — introduced just weeks before the glory of 2017. The 2019 kit design takes inspiration from a famous Dutch victory and feeds it into what increasingly feels like a golden era for the women’s team. 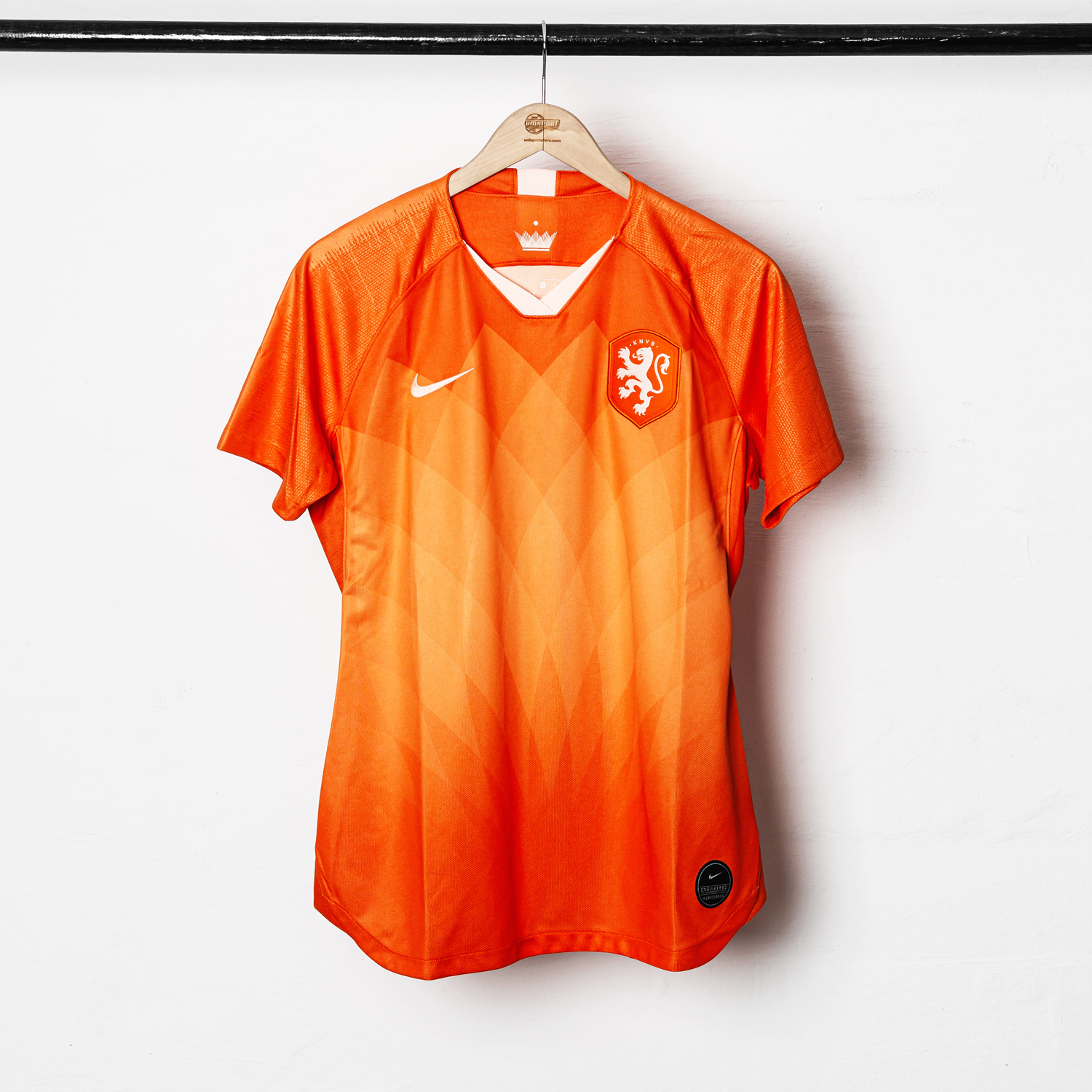 Another Scandinavian country enters the list with the Sweden home kit. The new Sweden Home Shirt WMNS is more than just a shirt, as it comes with a nice graphical design on the chest, which takes inspiration from the iconic 1995 Home Shirt, where Sweden hosted the Women’s World Cup. Here they had the well-known yellow and blue shirt, with stripes on the side. ’We create history’ – is the mindset that Sweden is going to have when they’re battling for the gold medals in France this summer. 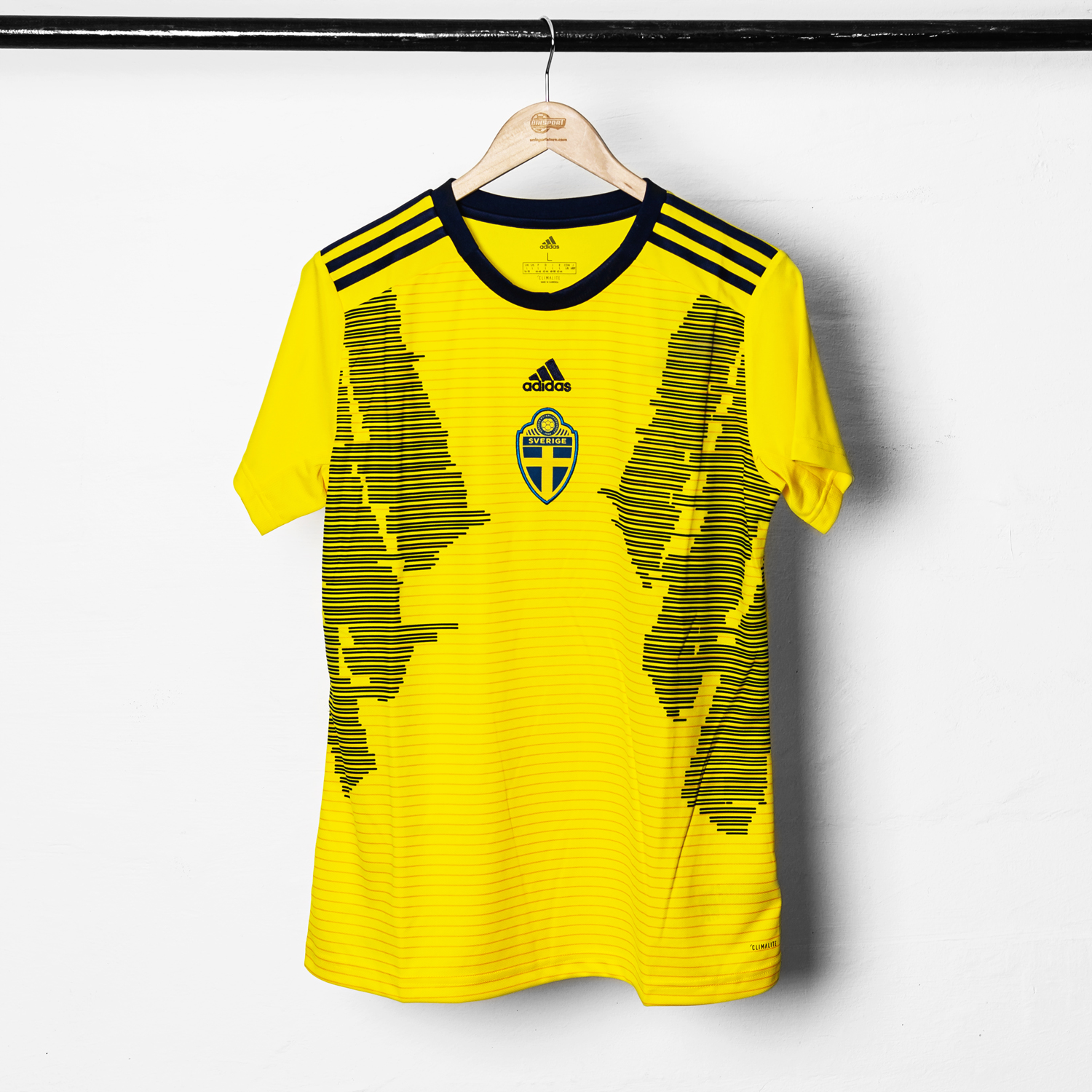 As the away team, the United States Women's National Team amps up its undeniably American identity in a red shirt and shorts with blue socks. The shirt is highlighted by an abstraction of the American flag and the three shining stars. Inner pride on the away shirt reads “One Nation, One Team.” 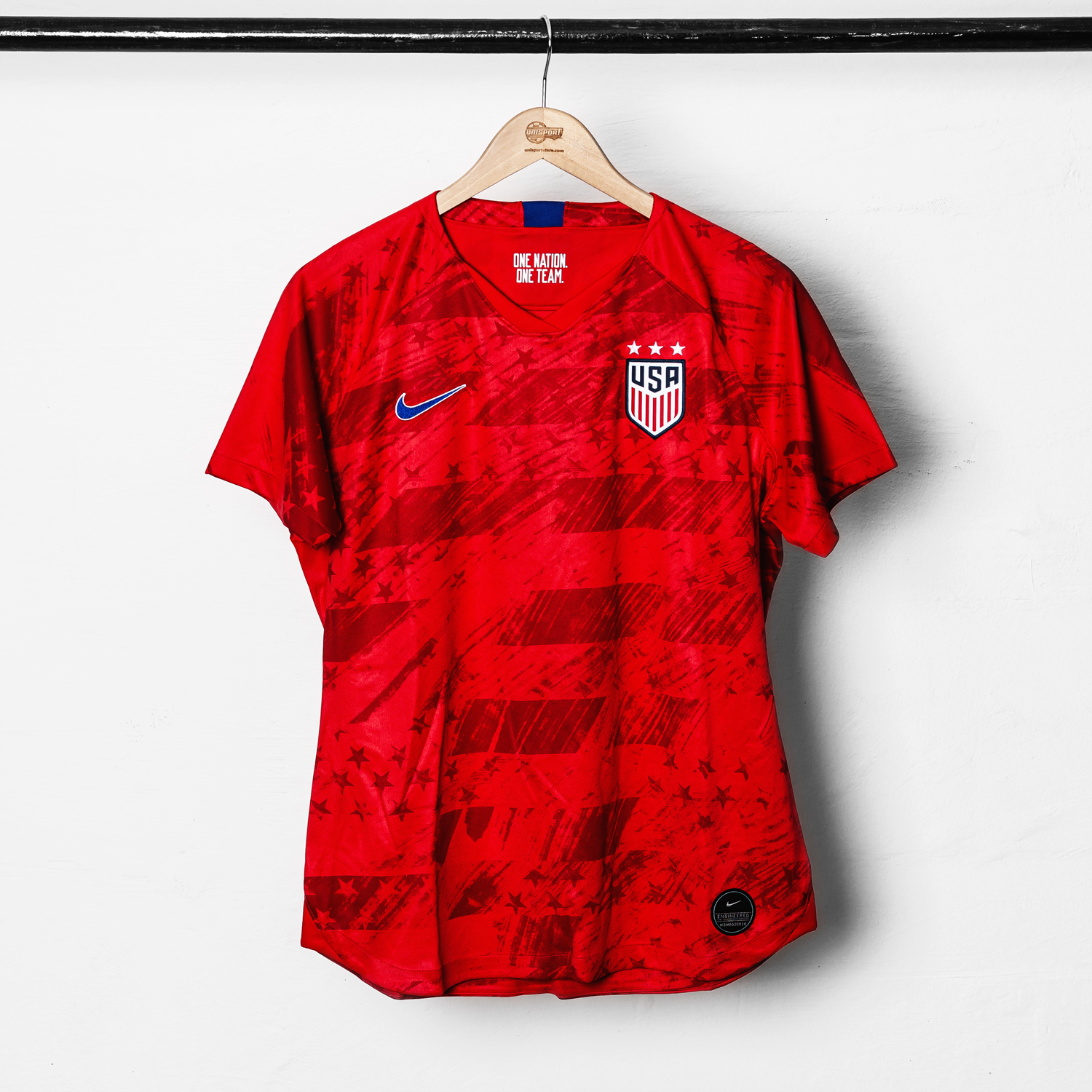 A rebirth, or more directly, a reprise of the glory years, remains the goal; the new women's China away kit is a symbol of that opportunity. China's new away shirt carries a brilliant all-over Phoenix print conveying femininity and virtue. Crimson pops on the sleeve enliven the gray tonal body, and a second Phoenix print sits within the kit as a symbol of inner pride. 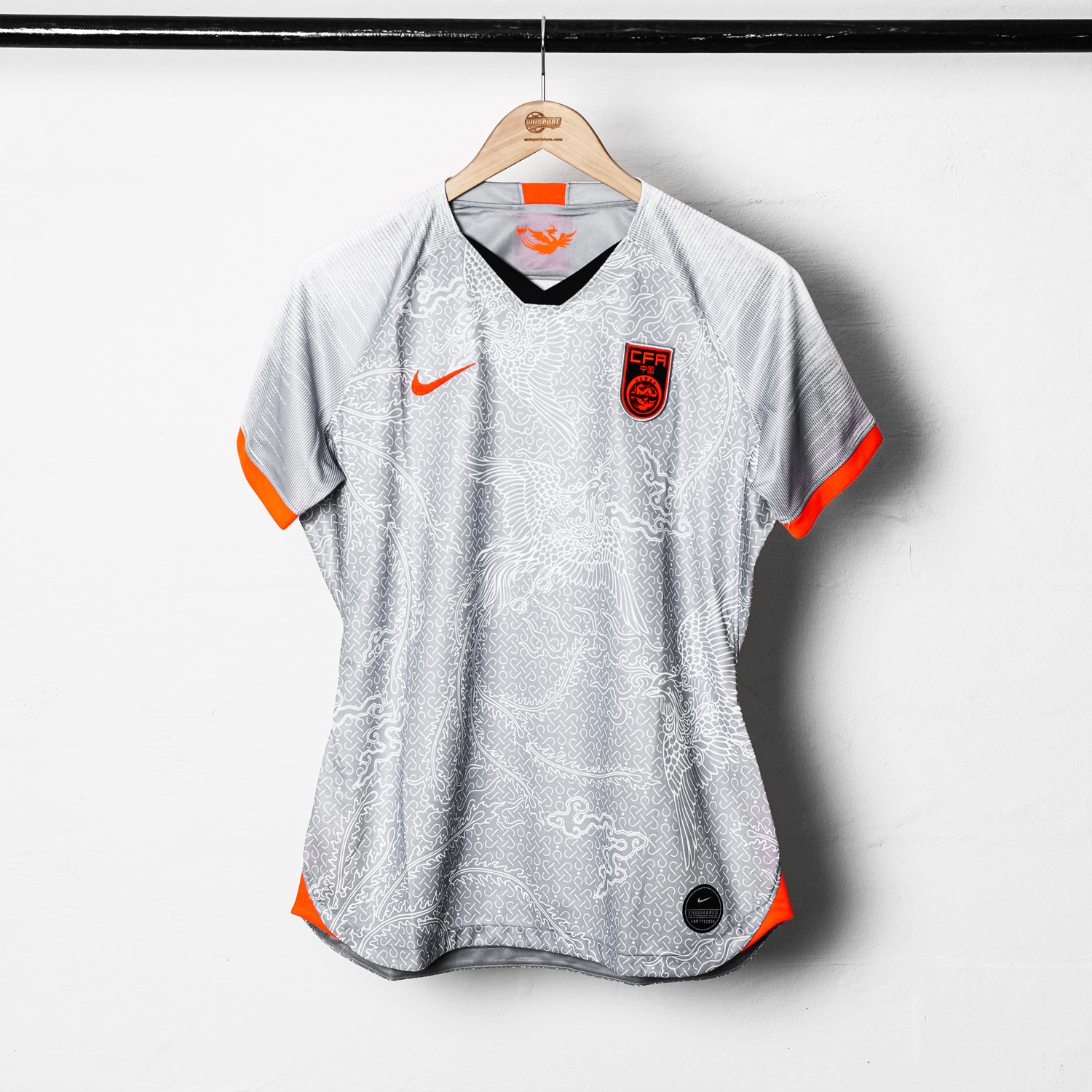 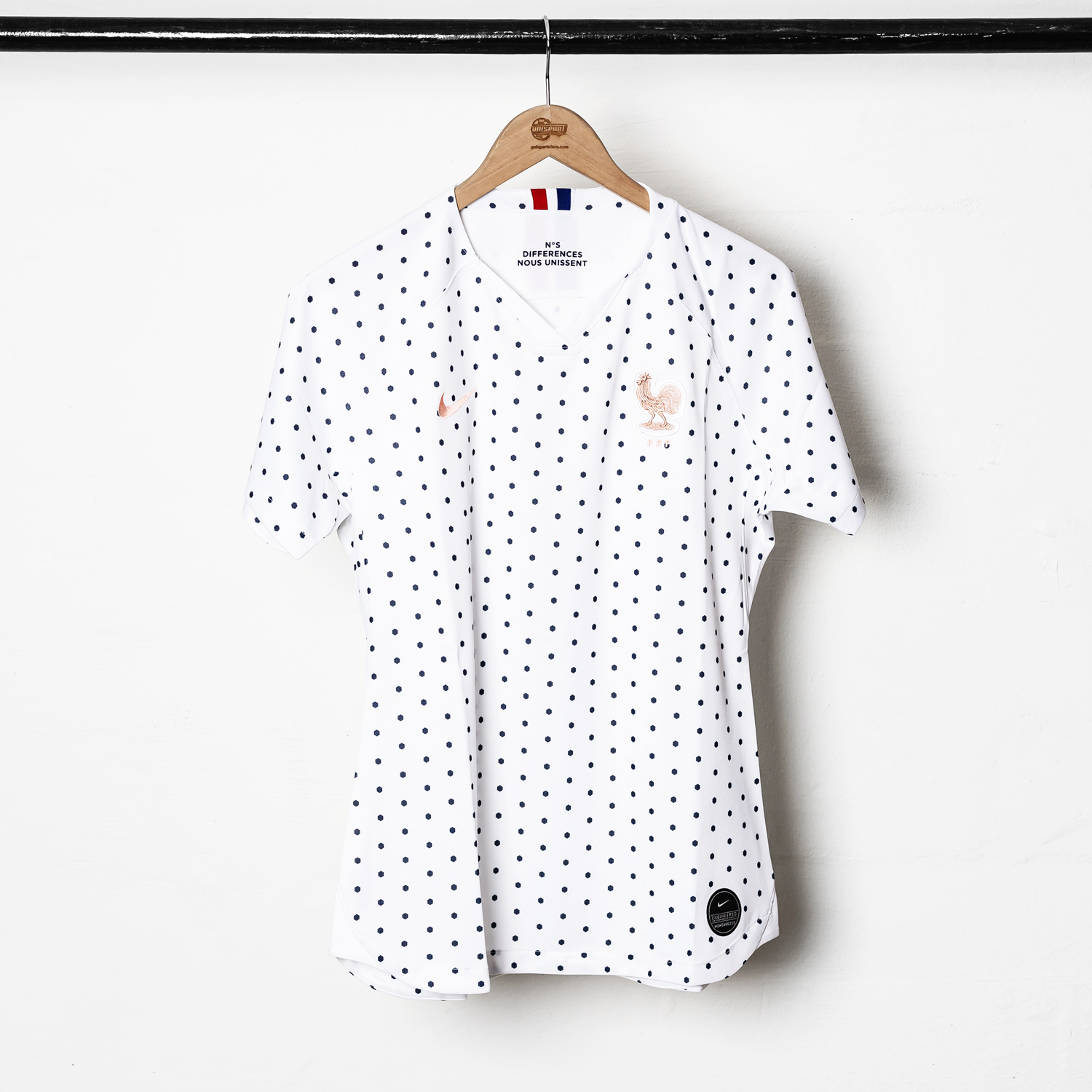 The common poppy, primrose, rosebay willowherb, wood anemone, spring gentian, Nottingham catchfly and traditional rose intermingle with the hop to form a floral pattern that represents the entire country of England all feature on the away kit. Rendered in a dark red crush, a darker shade exclusively for the women’s team, the kit incorporates the St. George’s Cross on the shirt and a unique dark red crush-colored crest exclusive to the Lionesses. 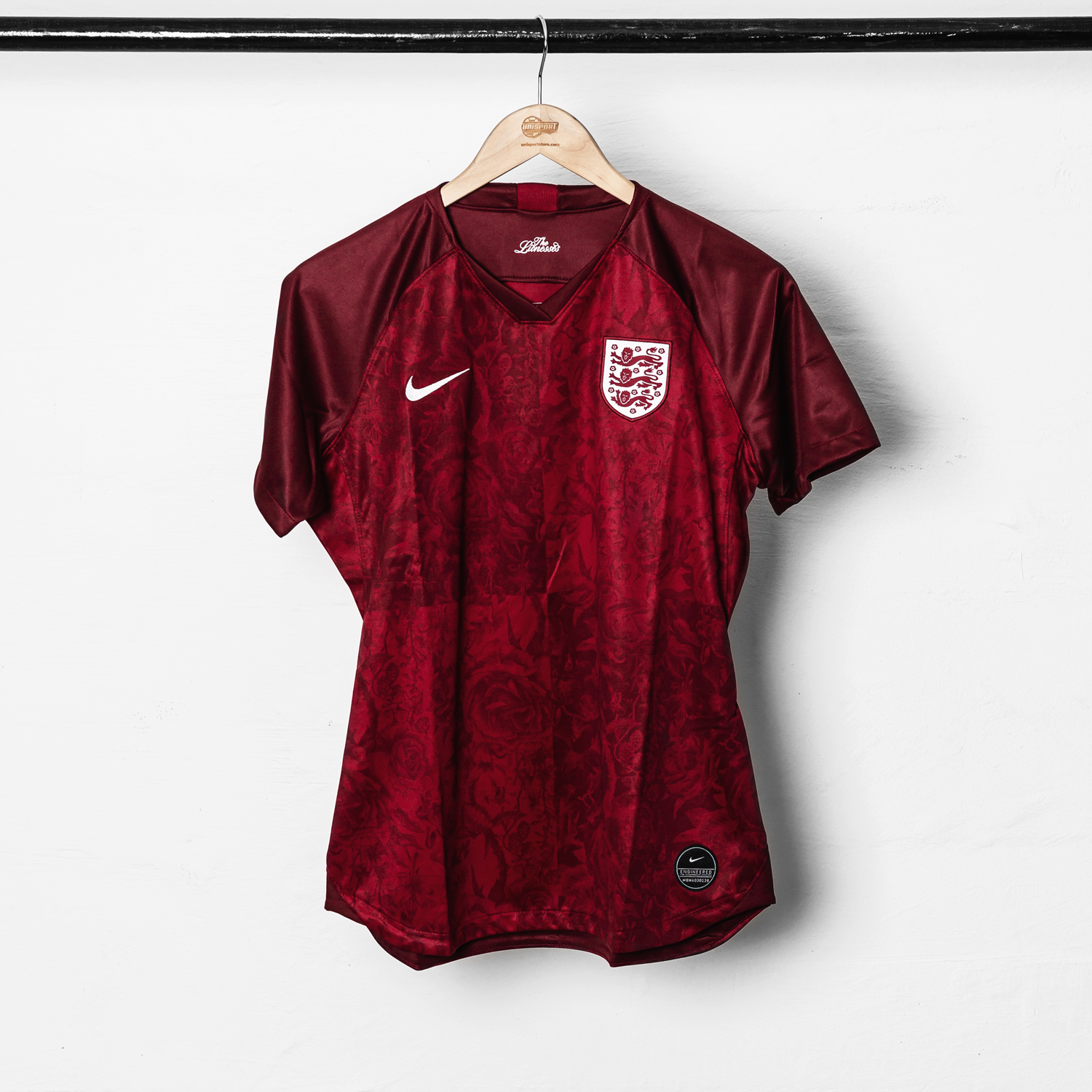 Landing as a homage to 1989 (the year that they won the European Championship title in the own country) with its similar graphics and colours on the chest, the new home jersey represents a breakthrough period for women's football in Germany including the semi-final being the first women's national team that was broadcast live on television. Congrats on an impressive 3rd place on our list! 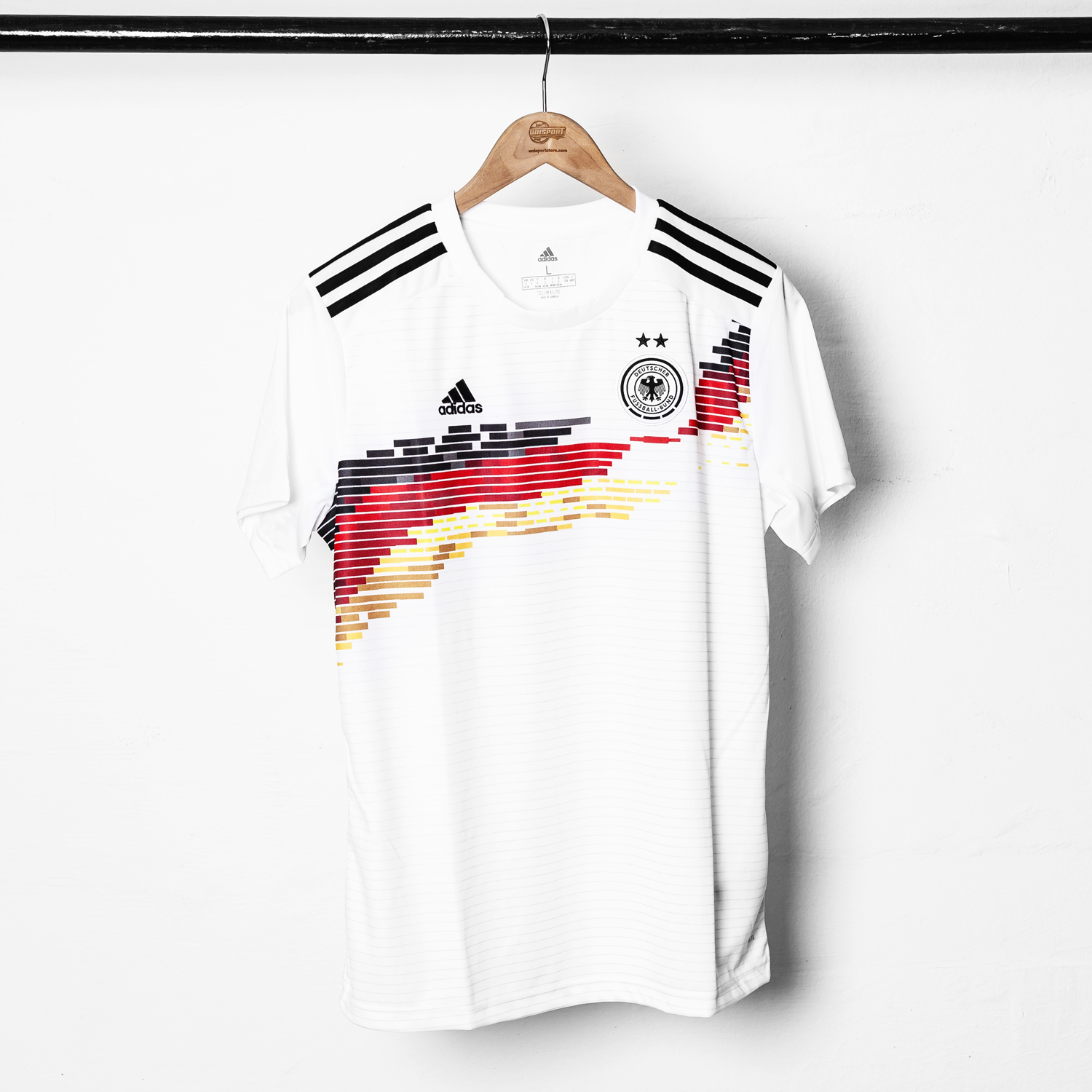 Nicknamed the 'Reggae Girlz', the best Jamaican women footballers will be representing their colourful nation at a World Cup for the first time in their very short history - 1991 to be correct. An what a kit they'll do that in. The away shirt clearly draws inspiration from the Jamaican flag with its mix of dark and vibrancy to balance their dogged determination and colourful personality. It's very eye-catching with a rich graphic on the body inspired by the energy of Jamaican culture. What - a - kit - Umbro! 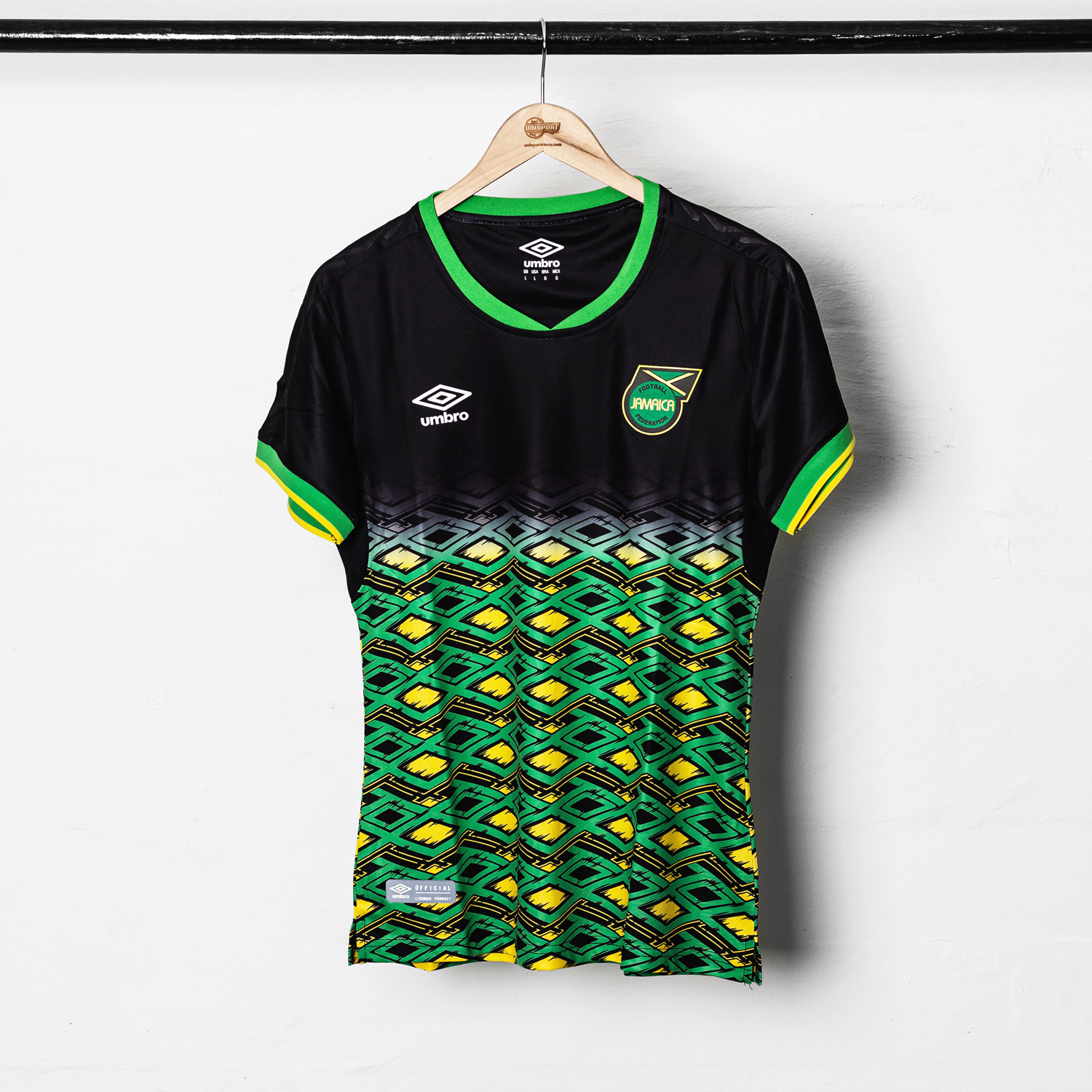 And the winner of them all: Australia! “Never Say Die” is printed inside the kit, which is a common rallying cry among the Matildas. The new Australia home kit, part of the first National Team collection designed exclusively for the Matildas, channels an exuberant aesthetic born in the early ’90s. Melbourne’s famous Hosier Lane, a globally recognized street art hot spot, the famed Golden Wattle and its sickle-shaped stalks and macro and micro shots of the Australian landscape all coalesce in the graphic — one that serves to encapsulate contemporary Australia. 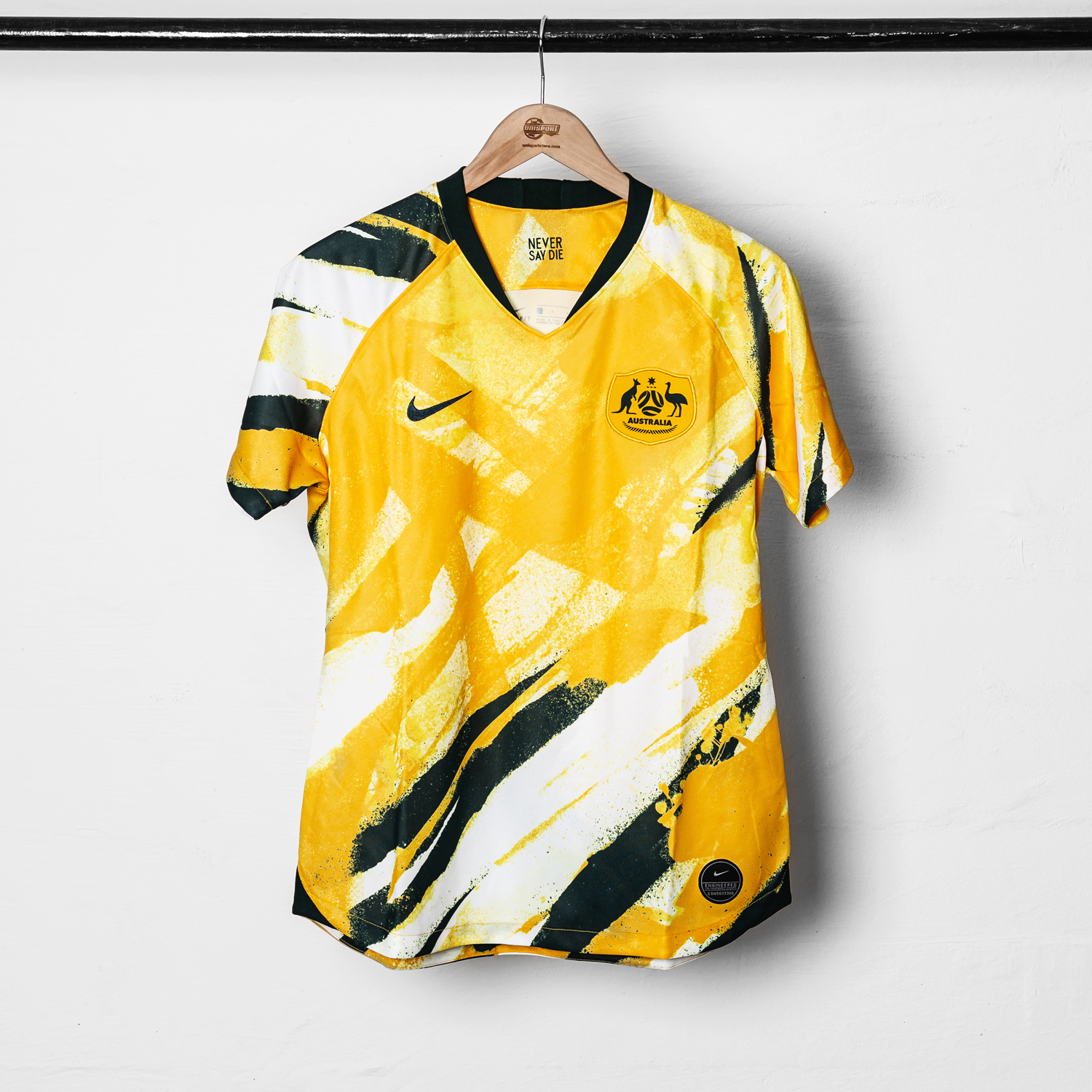