In just 9 days we will be exactly 2 months away from the kick-off as Brazil and Croatia start the World Cup. We have already seen how Nike are warming up before the World Cup in Brazil with numerous colour updates, and especially their Fast Forward series that celebrated the Mercurial collection in connection with the previous World Cups. Now, Nike have once again launched a World Cup theme for the ninth generation of the Mercurial. We here present: the Tropical Pack. 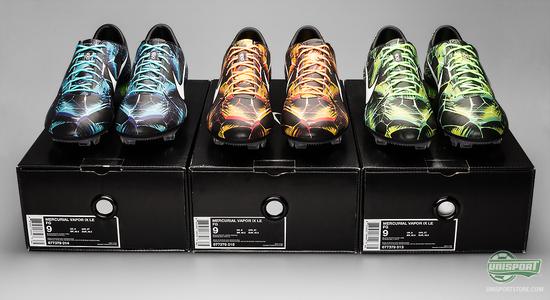 Brazil seems to be a country full of inspirational sources. Over the last months we have new colour updates in abundance, all inspired by the World Cup host nation. With this latest series from Nike, it is very much obvious that they have been inspired by the Brazilian nature and culture, and have incorporated it into the design. 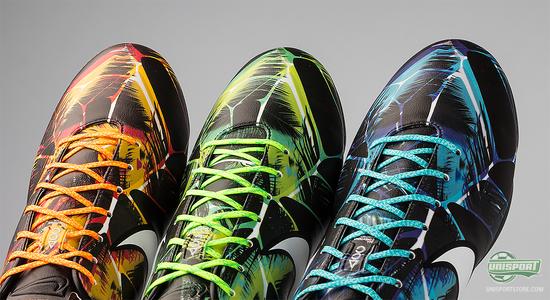 One of the things that Brazil is known for is the Amazon rainforest. Therefore, Nike could not stop themselves from creating a design that could represent the tropical nature, which covers the majority of the country's geographical area. In addition, the colours also symbolise the enthusiasm of the Brazilian people, which is always displayed in the streets around Brazil. 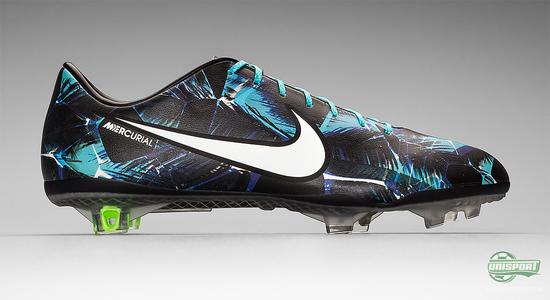 Is this blue model from the the Tropical Pack your favourite? Order it already now - just €250 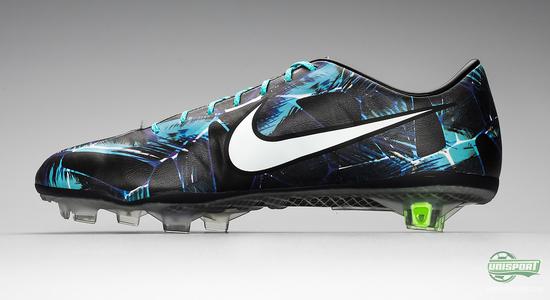 All three boots come with a black upper, which has been decorated with the tropical design. Each model will only be available in 2500 pairs worldwide, and each pair of boots will get their own unique serial number. The first boot comes with a combination of turquoise and white; and while the design is rather different from what we are used to see from the Mercurial collection, the boot itself is just as we know it from the latest Mercurial Vapor IX. 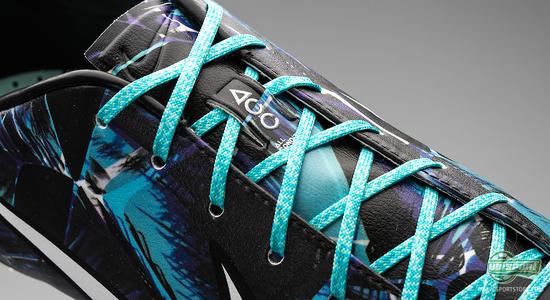 The football boot comes with the well known Teijin OLM 12 upper, which has become a trademark for the lightweight boot from Nike. The synthetic material keeps the weight at a minimum, while providing a snug fit around your foot and hereby also fantastic and precise ball feel. 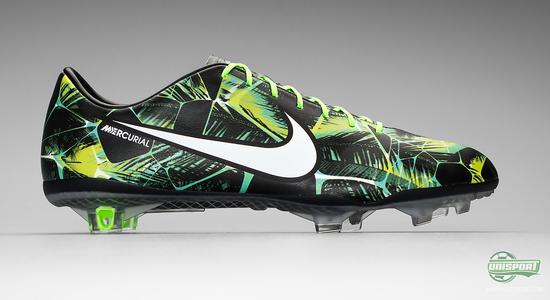 The next model comes with a combination of a lime green colour and white, which ads a fresh touch to an already dynamic design. On this specific model, the green colours on the back studs really come through and provide a very complete look. 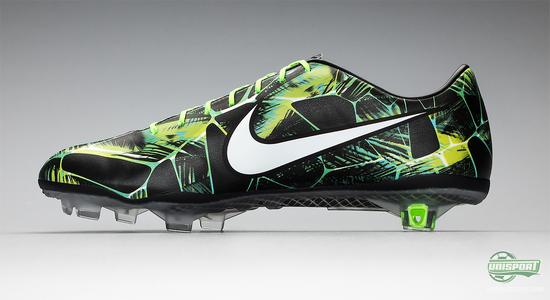 Something that Nike have decided not to add to this series, is their Speed Control technology. The golf ball-like texture has, although been included ever since the latest generation of the Mercurial collection was presented. We have also how Cristiano Ronaldo has chosen to play without the special texture, something that Nike have chosen to follow with this series. Instead the upper comes with a leather emulating finish, as we know, for example, from the Mercurial Vapor Reflex.

Are you more into the lime green colour? Then go ahead and order it now - just €250 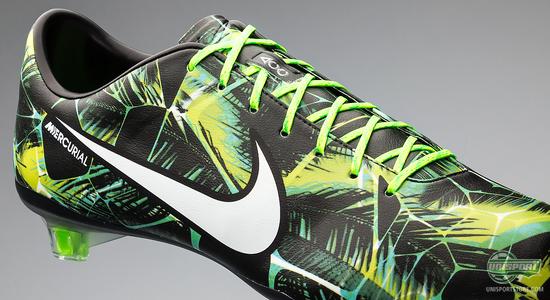 On the other hand, the ACC technology is still incorporated into the upper and does not look like something that Nike will leave out any time soon. The revolutionising technology has truly taken the Nike football boots by storm and is something that we are now seeing across all four silos. Especially in countries and areas with a lot of rain, people are loving the concept that ensures a consistent ball grip even in wet weather conditions. Some may hardly remember how they used to control the ball before the ACC technology was introduced. 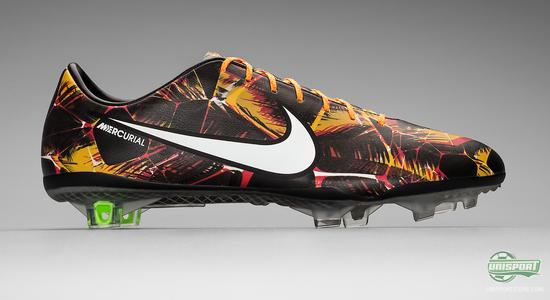 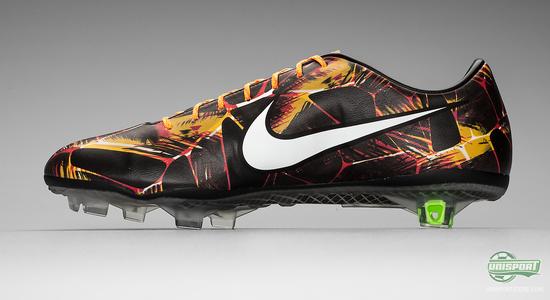 The last edition comes in a combination of fiery red and yellow colours that very much underline the fact that the Mercurial is a speed boot. This colourway truly displays speed and weighing in at just 185 grams, there is nothing stopping it. 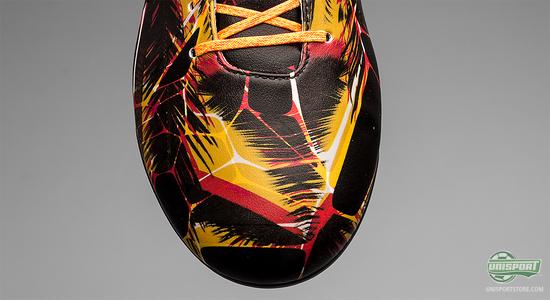 You can also go for the yellow/red model. Go ahead and order it right now - just €250

In order to reach that high speed, you will, although, need more than just low weight. Your grip also needs to be excellent, and therefore Nike have naturally also passed on the successful stud configuration to this latest series from the Mercurial collection. The sole is made of two layers of fibreglass, in order to create an optimal combination of flexibility and stability. 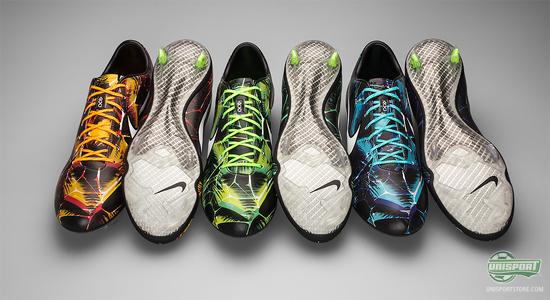 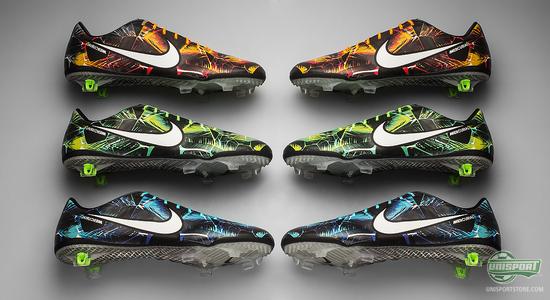 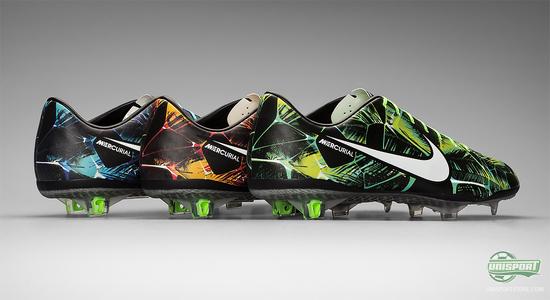 The new tropical pack from Nike is certainly applauded here at the Unisport Headquarters. With just over two moths to the biggest event in the world of football, we are truly starting to hear the carnival drums in the distance. So, if you are looking to get the true Brazilian feel all the way to your toes, then this Nike Tropical Pack is the way to display the Brazilian nature and culture. What are your thoughts on the Nike Tropical Pack? Does it top the previous Mercurial designs, or is it too much for your taste? Take your football passion to a social level and leave a comment on Facebook or Twitter.