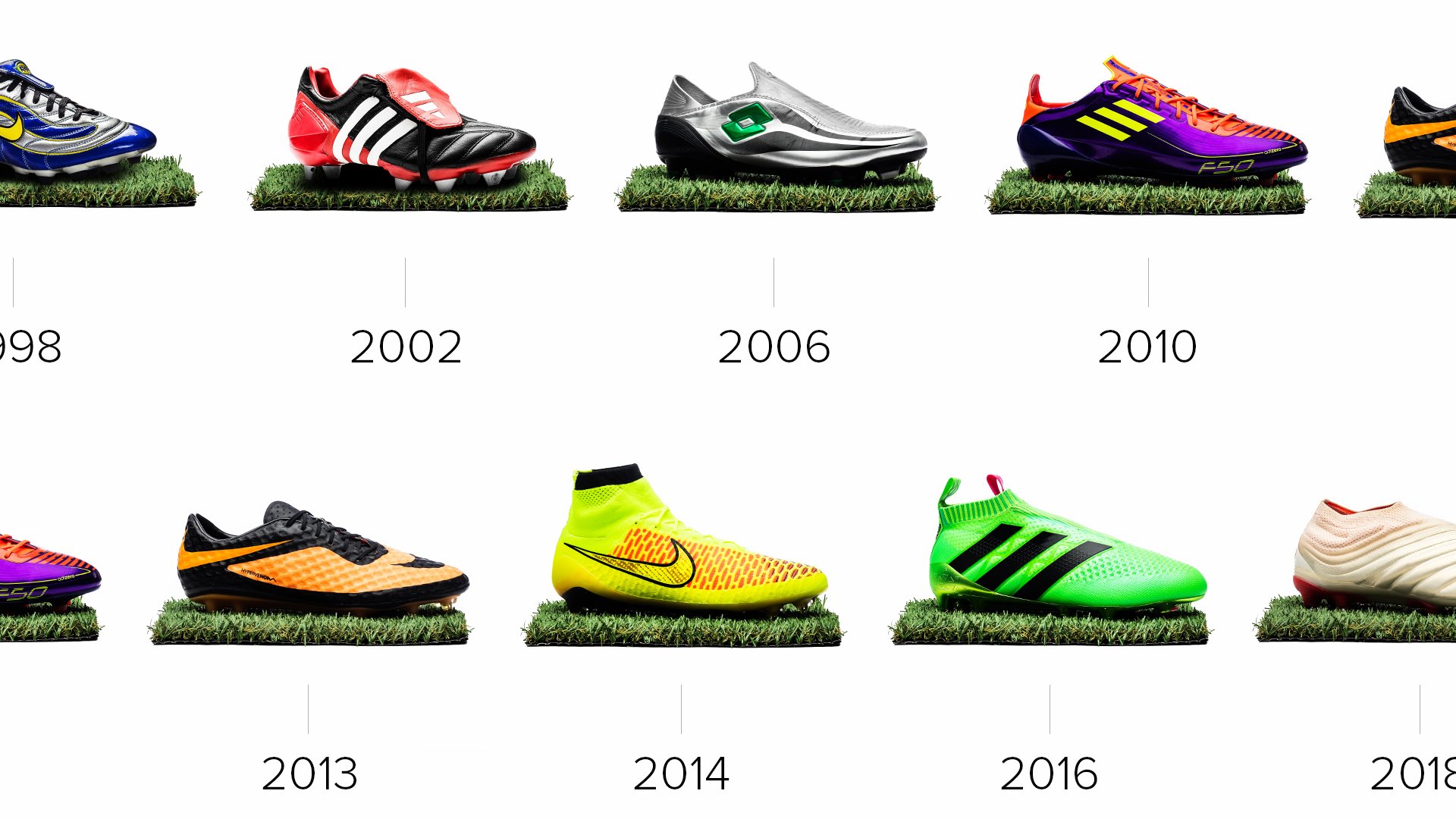 As you may know, at Unisport we celebrate our 25th anniversary throughout the whole year, which is why there’ll be a whole bunch of blog post we believe are of great interest to our beloved readers. This time, we’ve devised a blog post acknowledging 10 important and groundbreaking boots for the past 25 years, since Unisport is probably most known for selling… well, football boots, of course.

From adidas, to Nike, to Lotto and PUMA, surely some of you - and by some of you we mean the most hardcore football boots aficionados - can think of a handful of boots, which undoubtedly made their mark in the history of football. Since it’s been 25 years since Unisport was founded, we’ve hand-picked 10 football boots we believe have had an substantial impact on the world of football, even though there are many more football boots, such as the first adidas Copa Mundial from 1979 - probably one of the most revolutionary football boots of all time, which likewise are worth mentioning. However, we can only hope that many of you will agree with the boots listed below.

We’re gonna start off with the Nike Mercurial R9 from 1998 - The first Nike Mercurial, which was designed after the idea of a sprinting/running shoe, and was developed for R9's game based on speed and quick changes of direction. The boots had the first synthetic leather upper ever and a grippy coating on the toebox for extra grip. The father of the speed boot.

The first Predator from 1994 is perhaps the most groundbreaking because it introduced us to the technology of rubber elements for more grip and spin when kicking the ball. However, the Mania from 2002 really extended the concept with its ultra-iconic design, the famous long tongue, which was supposed to be held down with the world-renowned elastic rubber band and SL-rubber kicking elements. As if this wasn’t enough, legends such as Beckham, Zidane, Raúl and Del Piero, who at that time were active adidas players in their absolute prime years rocked the adidas Predator Mania. That’s why the Mania from ‘02 is considered to be the best football boot ever to many Pred-heads.

Nike's big breakthrough on the speed stage. An even wilder and lighter package featuring a single piece upper of NikeSKIN ultralight material and an ultra-fast, resilient sole with elongated studs for ultimate grip on the pitches. Vapor 1 was crazy because it broke all conventions and provided an experience of not really wearing boots because you were so close to the ball - except for the many blisters, it also provided…

The first football boot without laces was made by Lotto in 2006 as a successor to their extremely popular Lotto Zhero+, a speed boot which without a doubt was a precursor to the F50 adizero and a strong competitor to the Mercurial Vapor III. Zhero Gravity was made of the same recipe, but with an opening that allowed you to squeeze your foot into the boot with a shoe horn, giving you a tight fit and NO distractions on the ball. Adidas repeated the venture in 2016 with ACE 16+ PURECONTROL - a woven boot without laces, but they were not the originators behind.

Another great member of the speed boots-family. Made with an ultra-thin upper and an incredibly lightweight sole that was only 1mm thick, the boots were also made with the so-called half-board construction, where the boots had only the internal soleplate in the forefoot and not all the way through, which boots normally had. And yes, it weighed only 156 grams, which was completely unheard of in 2010. In addition, the boots were likewise made of leather, and speed boots seriously became boots everyone had access to after a few heavy years for the Mercurial silo.

One of the best Nike boots ever, and a true landmark model because it kickstarted one of the most important periods in football for Nike of all times. The technology itself in the Hypervenom wasn’t that innovative, but a solid mesh construction that provided an incredibly soft, sock-like experience and an almost supernatural feel on the ball. Not groundbreaking in any way, but just a crazy good boot.

PUMA went their own way at the beginning of 2014 with evoPOWER, which was designed with the idea of allowing the foot to flex naturally and thus bend backwards, giving it a position that gives a more powerful kick - at least that was what PUMA had found out through research in collaboraiton with a German university. As a result, they had a upper and a sole that could bend both ways, and although we haven’t seen other brands copy PUMA's technology and concept, it created a tendency for PUMA to dare to explore other paths which was seen with the FUTURE, which incorporates the NETFIT-concept. A good, very underrated and extremely important boot.

One of the most important boots in modern times. The first football boot with a sock and made of knit, which shaped the future of football boots to a degree where all brands make knitted boots today. Nike introduced Flyknit, which we’ve seen on their running shoes during the Olympics two years earlier, and at the same time the high Dynamic Fit Collar, which was intended to give a more sock-like feel on the foot.

adidas' first laceless football boot, which set off a whole new trend. Not only did adidas seriously set in motion a new direction with more modern designs - they also used ACE to really set the agenda for marketing and innovation. Primeknit upper with an internal construction to keep the foot in place - and the ACE16 + had a ‘wauw’ effect completely out of the ordinary.

adidas recreated the magic of the COPA series with a modern leather boot that - in addition to being laceless - was also made with FUSIONSKIN; a technology that lets you glue things on leather as if it were a regular microfiber upper. Usually, when you want to incorporate things such as logos or rubber elements on leather, you have to sew it, which gives a more stiff leather upper - but with FUSIONSKIN you can keep the leather soft and supple, while simultaneously making it less water-absorbing.


There you have it, guys. These were in our opinion 10 of the most important and groundbreaking boots for the past 25 years - from 1995 to 2020; our 25th anniversary year, and we hope you can agree on that. If not, well, then let’s wait another 25 years and see how football boots are gonna develop, because by the time we turn 50, we’re pretty sure boots are only gonna be crazier, more techy, and nonetheless revolutionary, but perhaps not as iconic as the 10 mentioned above. Till next time! #unisportlife