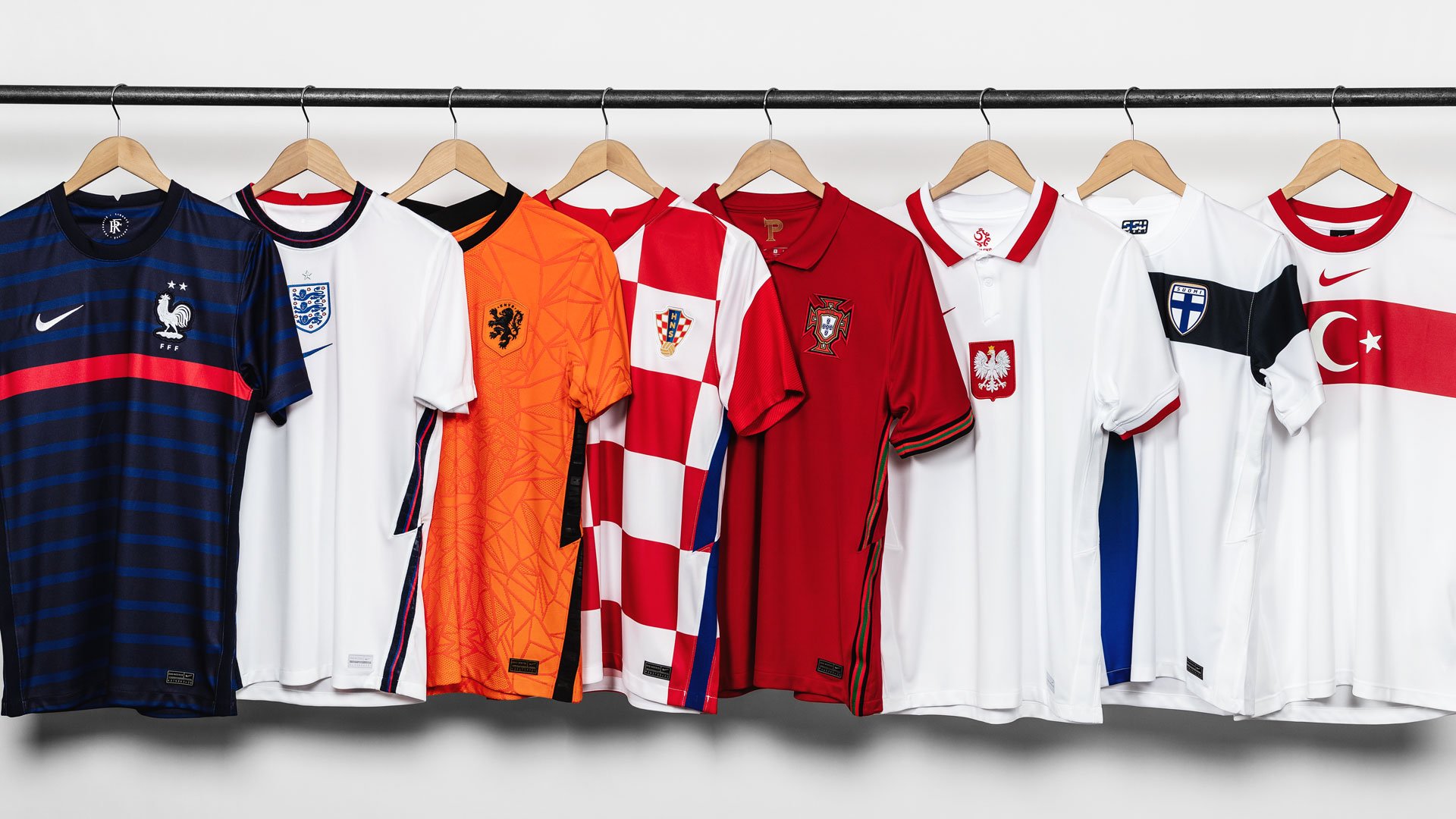 Finally! We have waited for so long, but finally the national teams are back in action. What should have been a summer of the Euros turned into a summer of league football and Champions League. Not bad at all, but still a bit strange. It did mean one bad thing though - we missed out on all the new national shirts. But now it’s time to get back to what we had planned. Back to what we all love. Cheering for and celebrating our national pride!

And that is exactly what we will be doing now. Because Nike have released the European national shirts - both home and away - for the Euros. Thankfully, we are lucky enough to see them unfold already in the Nations League. We are talking about new shirts for (hold on!); France, England, the Netherlands, Croatia, Portugal, Poland, Finland and Turkey. To be honest - there are some outstanding shirts along this launch. Let’s start off with one of those that never blows it - the French!

As said - the French shirts never disappoints. The home shirt draws a bloodline back to about 20 years ago, where the French home shirt had a red stripe across the chest. This stripe is brought back and now connects generations of great French players, like a young Henry and young Mbappé. Back in 2000 France won the Euros - and they look like possible winners again. If not, they’ll have to settle with having one of the best looking away shirts. Because the white shirt, with the tricolore down the side, is a real beauty!

The English national team will also pay homage to their history. The home shirt especially reminds us of a legendary English home shirt, as it has the England logo with the three lions in the middle of the shirt. With the new shirt England show their pride, but in a new way. It’s a way of celebrating the diversity in the nation, but still remaining loyal to the English traditions. The away shirt remains also loyal to the English culture, soul and attitude. By having an all-over graphic of the three lions and a royal blue colour, this shirt is the definition of English football and class.

As you probably can guess, the Dutch home shirt is in the always recognizable and eye-catching orange colour. A colour that only the Dutch national team can pull off - something they always do with style. But if you look closely enough at the front of the shirt, it’s not just an orange shirt. You’ll also find a graphic of a huge lion printed into the shirt in a subtle black. A very nice detail for the “Oranje”. The away shirt is also elegant and raw. It’s predominantly in a black colour with orange details around the shirt. This home and away shirt combo will intimidate and create fear everywhere the Dutch occur.

Like with the Netherlands, you can probably guess how the Croatian home shirt for the Euros will look like. Just as we love and are used to, the home shirt comes in a red and white checkered pattern. That is what we would call a classic Croatian home shirt. The 2018 World Cup-finalist’s away shirt will also have the checkered pattern, but on this occasion in black and grey colours with small red details, such as a red stripe on the side. Another important detail is that the pattern is a bit smaller than the home shirt’s pattern. Still very Croatian - and still just the way we like it.

Red, green and gold. That is the recipe for the new outstanding home shirt for the Portuguese national team. The reigning European champions, and not to forget Cristiano Ronaldo, will look stunning in their new home shirt - a shirt that is designed to honor the Portuguese pride. But ‘A Seleção’ will not only have a stunning home shirt. The away shirt is also something that will make your chin drop. Inspired by the country’s street art scene, the away shirt will have a teal tint base with black, red and green stripes across it. By adding those colours, the away pays a little homage to the home shirt. All in all, these shirts will give a very modern look to the Portuguese national team.

The new collection of Polish home and away shirts will celebrate the legends of the past, as it is made with thoughts of paying a tribute to the Polish national team of ‘82. Back then Poland finished third in the World Cup, which is one of their best achievements ever. In the Euros in ‘16 the Polish team made their best ever run at the Euros. And now they are back with one of the deadliest strikers in the world, Robert Lewandowski, who is ready to take on the challenge of surpassing the achievements in ‘16 and ‘82. Both the home and away shirts will feature the classic Polish colours of red and white, but most importantly they will both have the centered crest, like the English home shirt. A detail, we like a lot at Unisport!

The Finnish home shirt is one of our favourites! With a huge blue cross across the white shirt, this shirt is something we will never forget. One of the details that we love is that the blue cross fades from dark to light blue, in order to resemble the sky of Finland. And that the Nike swoosh and Finnish crest being the stars on the night sky. The away shirt is a very classic shirt in dark blue, but with royal blue on the sleeves. The same colour as you would find in the Finnish flag. The away shirt will also feature golden buttons - again to symbolize the stars on the night sky.

Last but not least we have the Turkish home and away shirt. And to be honest - we might have saved the best for last. The Turkish fans and players have been calling for a classic traditional shirt, but still with a little modern detail to it. And their prayers have been heard. Both the home and away shirts are some real beauties! Like we saw with the Polish and English shirts, the crests have been moved into the middle of the shirts. And so have the Nike Swoosh and the number on the front of the shirt. The home shirt will primarily be white, but with a big red stripe across the chest. And the same goes for the away shirt - unless that it will be bordeaux red instead of white.

So that’s it! A lot of stunning, crazy, classic and beautiful shirts. Something for everyone - no matter your taste. Of course, this was just a quick peep onto the home and away shirts for some of the European countries. If you want to see more about the shirts - or maybe even buy one - then visit our Euro site. Otherwise, I’m sure we will see a lot more of these shirts in the future - both on the pitch and in the streets.