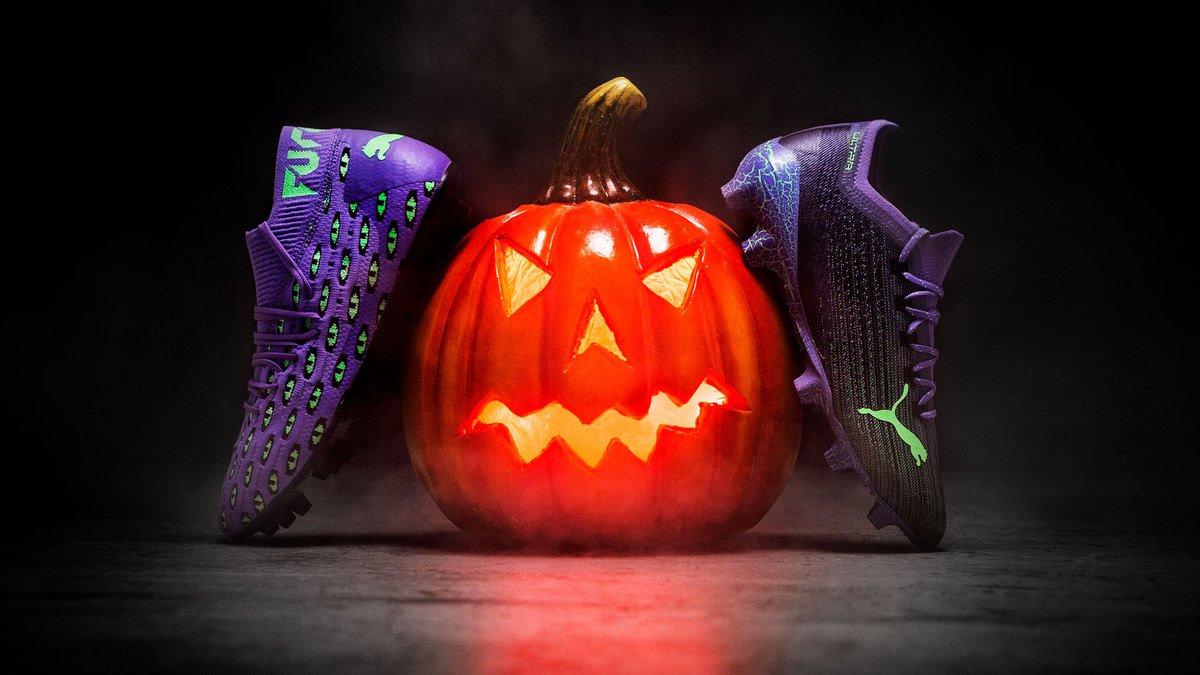 It is the scariest time of the year and PUMA is here to help you scare off your opponent! So, if you’ve always dreamed of having boots that could stun others, then here you go. If you haven’t figured out what costume to wear to scare people the most, then just wear the new Fear Pack - they will definitely scare people away. YOU PLAY, THEY PANIC!

The new limited colorway from PUMA has arrived and it is, without a doubt, the most intimidating we’ve seen so far. Halloween is upon us and what better way to kick off the winter season than with some new boots that will scare off the competition. The Fear Pack blends traditional Halloween colors of orange and black with a bright burst of luminous purple and electro green. Other than making Future and Ultra the scariest looking boots on the pitch, the Fear Pack also enhances your skills. We are definitely scared - let’s take a look at it!

Though, it seems like a normal colorway, it’s far from normal.

The colorway on the limited PUMA Future 6.1 Fear Pack is, as mentioned above, purple and green. Besides that, the Future 6.1 has added green cat eyes all over the boot, which will stare at you in the dark and make them fear you - even more than before. The outsole gives us chills, as it has a crackling design with black and purple, which reminds us of Halloween.

The PUMA Ultra 1.1 is as scary as the Future 6.1 in its colorway. It’s designed to look fast and fierce. It is purple with green and black stripes, which makes you look faster than anybody else. The Ultra continues the crackling design on the soleplate with purple and green and it doesn’t stop there - the PUMA logo on the side of the boot, which is green also has a crackling design to make it even more intimidating.

It is not only the colorway that makes these boots the scariest on the pitch, together with the technology, these boots are made to blow everyone away. It sure has blown us away - read about the technologies below the pictures.

The Future 6.1 has a revolutionary GripControl PRO coverage, which ensures a perfect control on the ball and a softer structure. The boot is known for its groundbreaking lacing system, which allows you to individually adjust the lacing. Besides that, the top layer is crafted from a single piece of fabric with a sock, which provides an optimal and close fit.

The outer sole is fitted with RAPIDAGILITY, which increases maximum speed and reduces weight and makes it possible to run safely and freely, when running at high speed. This boot is all about making it your own and with the new Fear Pack, you are able to make a statement and stun your competitors.

The Ultra 1.1 is made in the thin Matryx Evo-material, which consist of aramid-fibers and carbon-threads. Besides that, you’ll find that the upper close to the heel and ankle is made of a knitted sock, which gives you a smooth and nice feeling when wearing the boot.

The soleplate is made of Peba, which gives the boot flexibility in the front of the boot, but also a strong mid-foot, that stabilizes you. The studs are elongated and makes it possible for you to stand your ground and run off, before your opponent even senses it.

This is truly a sick and scary colourway! Speaking of sick colorways - take a look at the latest colorways of PUMA Future and Ultra by clicking here!

Or go get the new PUMA Halloween Fear Pack right here before everyone else!