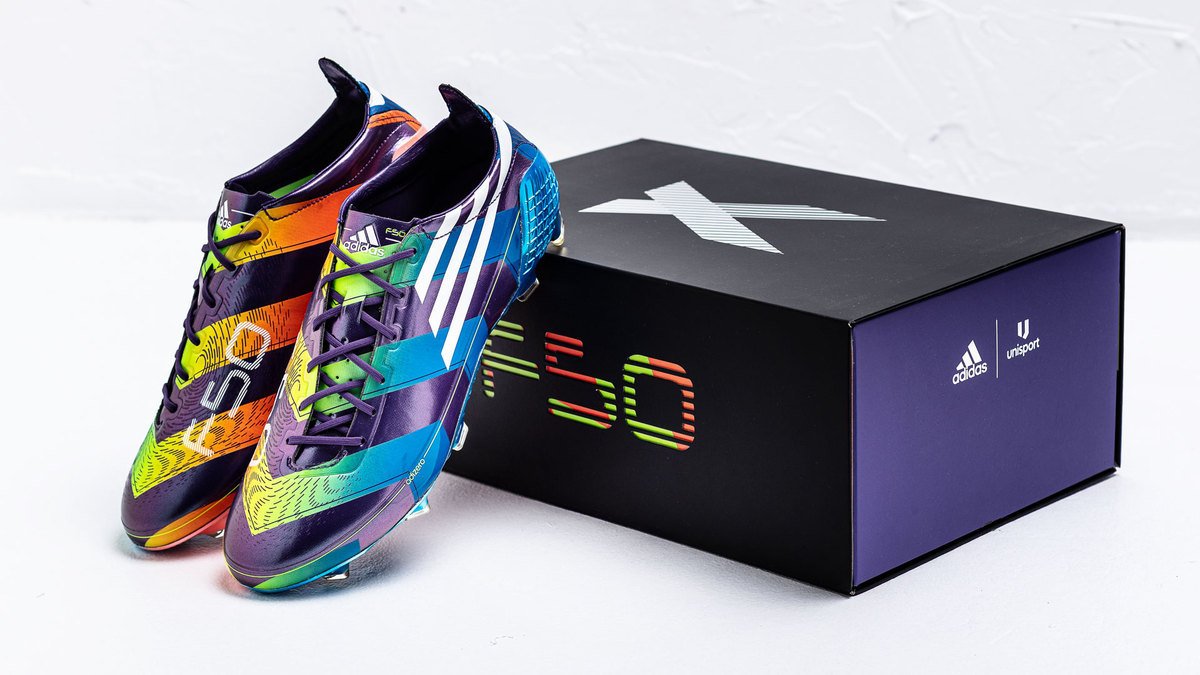 Unisport and adidas have created a football boot together. And it’s not just any boot - it's a F50 boot, which pays homage to some of the most legendary F50 boots; the adizero Chameleon and the adizero Crazylight. So join the celebration of 10 years of speed and light, as well as a 10 year anniversary for the first F50 adizero, with these Unisport exclusive F50 boots. Available on Thursday the 3rd of December at 10AM - in just two days!

If you didn’t already know, we have a thing for football boots here at Unisport. The way they can be changed, developed and always get renewed with the latest technologies, is just amazing. Some of the most iconic boots throughout history are the F50’s from adidas.

Before the 2010 World Cup in South Africa, adidas launched the F50 adizero, which Lionel Messi wore in a spectacular shiny purple colourway - it was called Chameleon. And in 2014, adidas launched the Crazylight which Gareth Bale wore among other big stars. Both boots were the lightest on the market at the time.

Now we will see a comeback for these amazing football boots. Because Unisport and adidas have joined forces to create the very limited boot, called F50 Memory Lane! Check out the pictures of the boots and read more about them below!

This collaboration actually already started last year. Back then adidas and Unisport talked about creating an amazing boot for the boot aficionados out there. And we asked ourselves: “Which boots have been some of the most revolutionary in recent years?”. The F50 adizero Chameleon and the F50 adizero Crazylight came to our minds almost immediately - we had to make something with these! That's when we thought; “Why not slap the Crazylight design on top of the F50 adizero Chameleon boot?” - And the result is pretty amazing, we gotta say! When you’re done looking at the stunning pictures once again, you can learn about the boots' technologies here!

The upper of the adidas F50 Memory Lane is an exact remake of the original Sprintskin upper on the adizero from 2010. Back then, adi made an extremely thin and flexible upper, which had a texture that gave you some extra grip on the ball. On the inside of the upper from 2010, we find the Sprintweb - it’s like a ‘skeleton’ for the upper and is made to reinforce the midfoot for more stability and structure. The ‘skeleton’ are needed, because the 2010 adizero upper is very thin - actually they were the thinnest on the market at the time. Otherwise the upper would and will collapse.

The original soleplate was called ‘Sprintframe’. It was ultra thin and a big reason why the F50 adizero could be so light. It was so thin that it was only 1 millimeter thick in some places. But it still kept its stiffness, which gave a better acceleration. On this F50 adizero Memory Lane boot, the soleplate is the 'Speedframe', which we also see on the X Ghosted +. It features the Carbitex technology, which gives you a very responsive feeling. And it also gives you the moulded 3D heel cap for an extraordinary level of comfort and lockdown.

We are very excited about this boot. To top it off, the adidas F50 Memory Lane will be used by Son Heung-Min from Tottenham and Kadidiatou Diani from PSG. These boots are of course exclusive at Unisport. And if you want to get a pair, you need to be ready. There are only 400 pairs worldwide - so they are pretty limited!

The adidas F50 Memory Lane is available from the 3rd of December at 10.00 AM CET here at Unisport. Click here, when it's time.