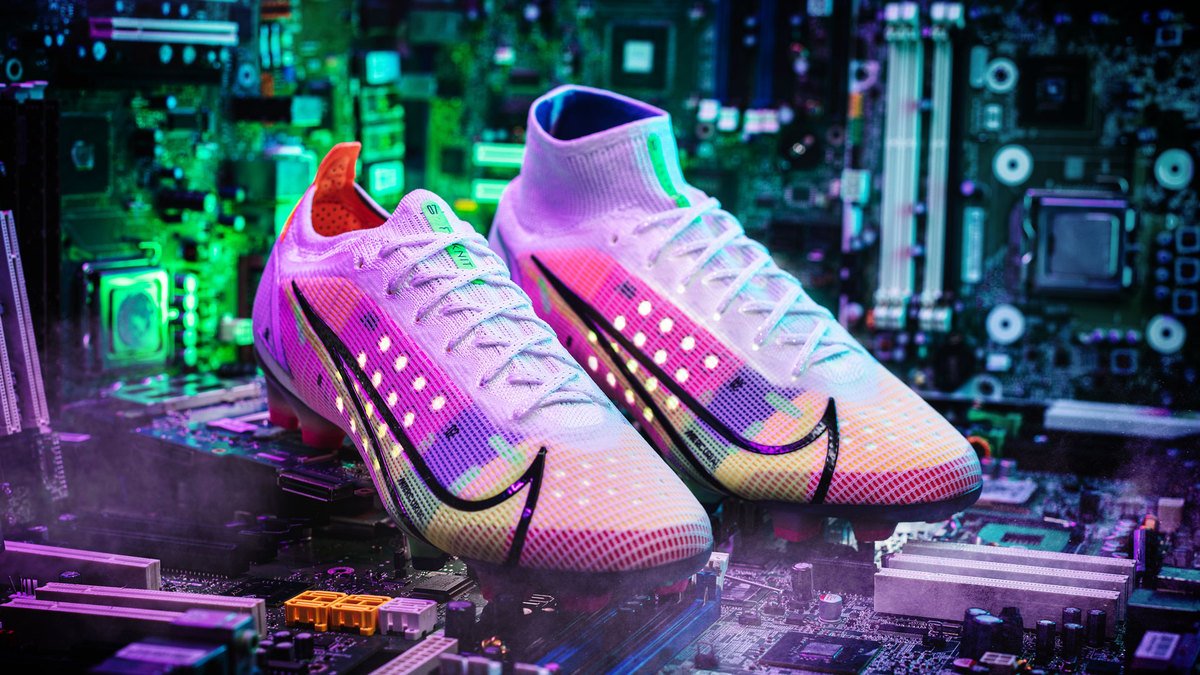 This is a moment, we’ve waited for so long - and we know you have too! To get a look at how the future looks for one of the most popular football boots in the world. And today is that day... Please welcome the new Nike Mercurial!

Available at Unisport from the 1st of February! Click here to explore the Mercurial.

Nike Mercurial.. Where should we even start?

Nike Mercurial is a pair of boots, which have set the standards for football boots for many years. It’s always in front, when it comes to innovation, speed and awesome designs and colourways. If you take a look at the list of players, who have worn Mercurial, you quickly get a feeling of the Merc’s greatness. It has been and are still worn by many great players, such as Cristiano Ronaldo, Ronaldo (O Fenômeno), Kylian Mbappe, Ada Hegerberg, Thierry Henry, Didier Drogba, Bruno Fernandes, Franck Ribéry, Erling Haaland, Marcus Rashford, Eden Hazard, Ruud Van Nistelrooy and we could go on and on and on.

Now it’s time for a new Nike Mercurial to enter the stage. This one is called “Nike Mercurial Dragonfly”. In our opinion it is the greatest name for a Mercurial ever. Try and say “Nike Mercurial Superfly Dragonfly” - doesn’t it sound awesome? And when we look at the new Merc', we definitely think it’s looking awesome too.

Mercurial Dragonfly is all about technology, fit, transparency and moving faster (together). In order to encapsulate that into one boot, Nike has removed any unnecessary layers and revealed the raw beauty of their innovation. All the components, which are designed for speed, are therefore exposed and made visible to us. Sounds crazy and innovative to us - and it looks high-tech as well! Check it out on the pictures below.

Mercurial has always been known for its state of the art innovations and technologies. Nike Mercurial Dragonfly is certainly not disappointing us. This time, Nike is even allowing us to look inside the boot, so we can see every layer of it and every innovation it contains. On top of that, they have even marked the seven most prominent details on the Mercurial with numbers in order to highlight them.

1. Avail Q Lining = Premium Microfiber that forms to your foot

3. Vamp Lining = Lightweight cushioning precisely where your need it

7. Flyknit = Adaptability for a close fit

Whether or not you are into socks on your football boot, Nike Mercurial Dragonfly is the boot for you, if you love speed. It will be available in both a Superfly and Vapor edition, so why not checking it out?

Extra exclusivity if you buy at Unisport

Nike Mercurial Dragonfly is of course a limited edition football boot. Which in itself makes it pretty exclusive. But if you buy your pair of Nike Mercurial Superfly Dragonfly at Unisport, the experience can become even more exclusive. How is that possible, you may ask?

Well, if you buy it at Unisport, you might find a very rare silver holographic Mercurial Dragonfly card inside the box. These cards are of course a collectors item, which shows that you are a true Mercurial aficionado. But it doesn’t even stop there... A very limited amount of these cards are so hyper rare and even more shiny, that they are rewarding you the boot for FREE*. Doesn’t it sound awesome?!

*If you find one of the hyper rare cards in your box, you’ll get a voucher for Unisport with an amount similar to the price of the Nike Mercurial Dragonfly, that you've bought.