Things are truly heating up these days. It is pretty much raining new football boots. And we are seeing some good indications that adidas may be about to release their first 4-silo update of 2015. However, they are far from alone in terms of putting out new stuff. Come along right here... 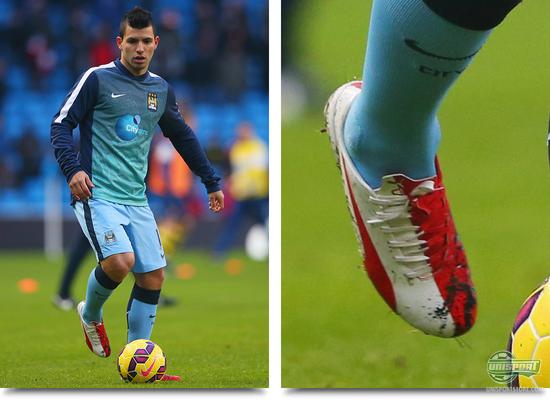 Sergio Agüero (Manchester City) - PUMA evoSPEED 1.3 Tricks Agüero Balotelli started it, then came along Reus, then Fabregas and now Agüero joins in. During the weekend, the Argentinian striker wore his first signature boots; although they didn't bring him much success. He had to leave the pitch without any goals and with a 2-0 loss. Although, Aguëro is probably still proud to have worn his very own evoSPEED Tricks. 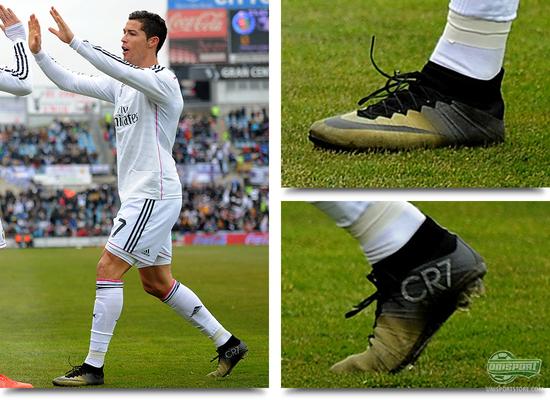 Cristiano Ronaldo (Real Madrid) - Nike Mercurial Superfly CR7 Rare Gold More success was to be found with the newly crowned Ballon d'Or winner, Cristiano Ronaldo, who for the second time was wearing his latest signature boots. Here he contributed with two goals to a 0-3 victory. We've got the feeling that Cristiano is rather satisfied with his “Ballon d'Or” football boots, including the little diamonds they carry. 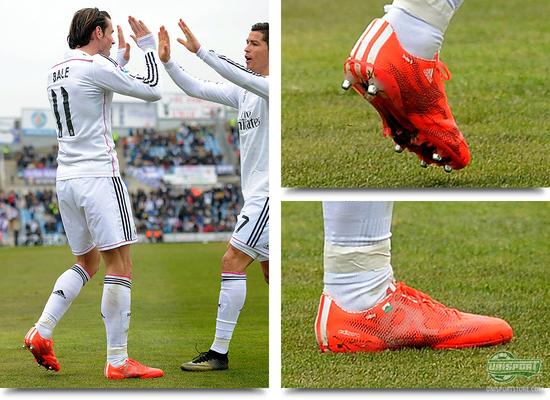 Gareth Bale (Real Madrid) - adidas adizero f50 (new generation) We have now seen a few of the f50 stars wearing it and now we are pretty much just waiting for it to be official. Over the weekend, Gareth Bale was certainly not shy to show off his f50 adizero. And they even got a little extra spotlight as he hit the back of the net, making it 0-2. 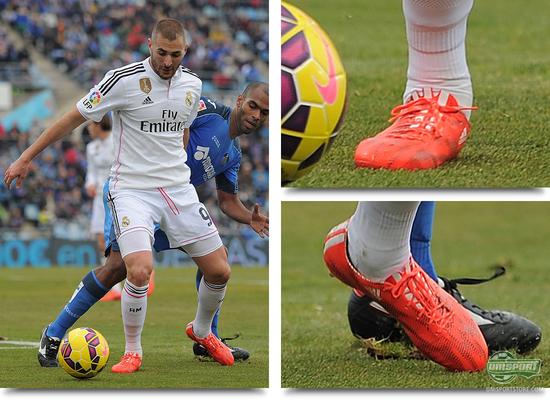 Karim Benzema (Real Madrid) - adidas adizero f50 (new generation) Benzema could also be seen wearing what seems to be a new generation of the f50 adizero. We can't wait to take a closer look at it, and see what the new generation will bring to the game. But it seems that adidas are keeping their secrets still. What are your thoughts on the boot? 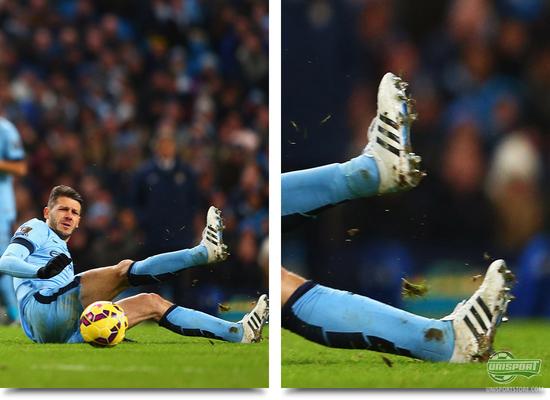 Martin Demichelis (Manchester City) - adidas 11pro (New colour?) In the weekend's match between Manchester City and Arsenal, it was not all about Agüero's signature boots. We have both seen looking to release a new f50 model, as well as new colours for the Predator Instinct. Therefore, there is reason to believe that Demichelis' pick of colours on his 11pro is not just for him, but is in fact a new colour update from adidas. We have at least noted that the colour combination is very similar to the first colour update for the 11pro in 2014. 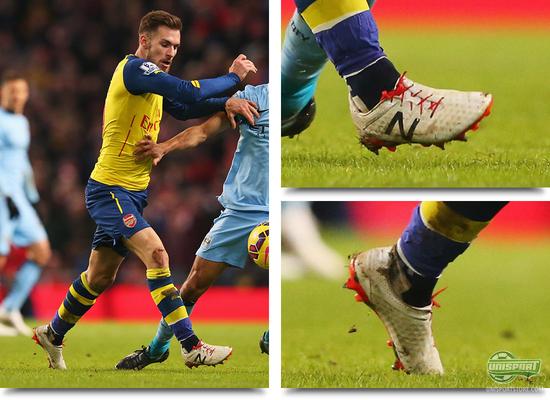 Aron Ramsey (Arsenal) - New Balance (prototype) And while adidas, PUMA and Nike are all busy putting out heir news, it seems that New Balance are refraining from rushing things. They are taking one step at a time. We have both seen their prototype in a black out and a whiteout, but now it seems that new Balance are getting ready to put some colours on their coming flagship. At least, Aron Ramsey was wearing a pair of white boots with a red soleplate and red lacing. We are looking forward to seeing the final result. 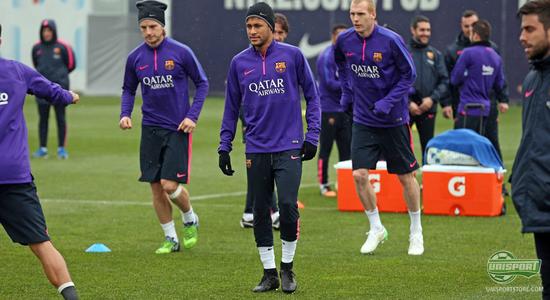 Neymar Jr. (FC Barcelona) - Nike Hypervenom (New generation?)
And it shall certainly also be extremely exciting to see the final result of what we are seeing right here. A blackout boot, which we have previously seen Lewandowski wearing for training, and now Neymar joins in. Based on the two, we have reason to believe the Nike are getting ready to release a new version of the Hypervenom. And according to the pictures, it will include the Dynamic Fit Collar. It is also worth noticing that Mathieu in the background, is wearing a Tiempo Legend V. is this just a boot for training or is he looking to switch brand? 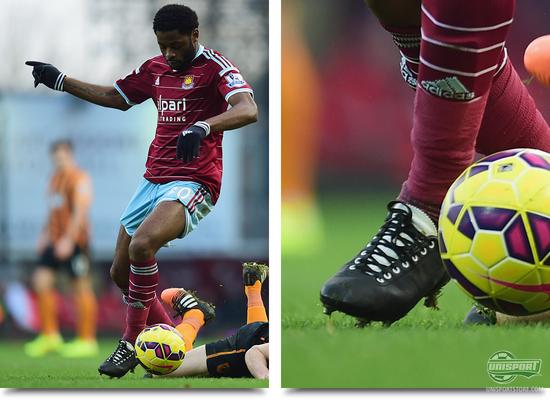 Alex Song (West Ham United) - Pantofola D’Oro Lazzarini Black/White Speaking of switching brands, we may add a few more. Here is the man Alex Song. After keeping away from the spotlight for a few weeks, we was again out during the weekend to make a name for himself. Song was wearing a pair of black and white Pantofola D’Oro boots. A classic football boot made from Italian craftsmanship. Is this his new sponsor? 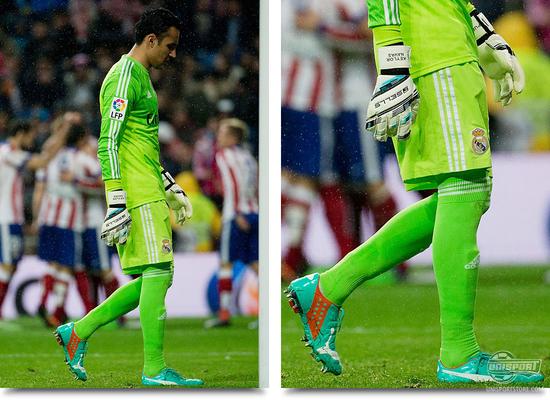 Keylor Navas (Real Madrid) - PUMA evoPOWER Green/White Keylor Navas was in action around the midweek as Real Madrid didn't make it further in the Copa del Rey. We couldn't ourselves from noticing that Navas was wearing a pair of evoPOWER. He has previously been spotted wearing both evoSPEED, CTR360 Maestri and Magista Obra. Now he seems to be trying out the evoPOWER. What would you pick? 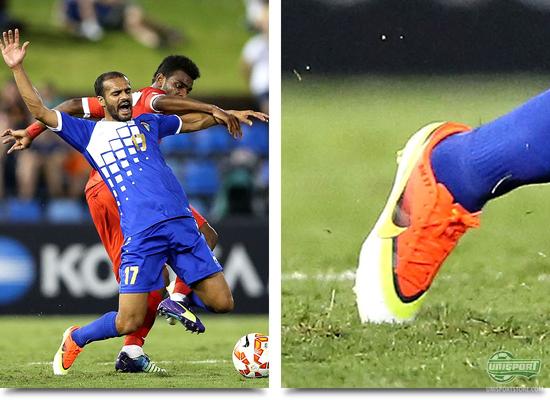 Bader Al Almotowaa (Kuwait) - Nike Mercurial Vapor VIII CR7 We round up this bootspot article with a little classic. The Asia Cup is currently going on and here Kuwait are participating with Bader Al Almotowaa on the team. This is something we appreciate, since it gives us the opportunity to revisit one of Cristiano Ronaldo's previous signature boots. We are speaking of the 8th generation of the Mercurial Vapor. Which of Cristiano Ronaldo's signature boots is the coolest in your eyes?

One will need to be alert and pay attention in order to keep track of all the news things that a re happening at the moment. We try to help out a bit by providing these boot spots. What boot are you looking forward to seeing more of the most?