Nike have brought out the paint and the result is four brand new and very loud versions of Nike's well-known boot silos; and they are truly born to stand out on the pitch. Both the Tiempo legend, The Maestri III, the Mercurial Vapor and also the Hypervenom have gotten new colourways, which will light up even in darker times.

Autumn is closing in, and that naturally brings darker skies, but there is no reason to be afraid of getting lost in the dark with Nike's new and colourful launch. With this latest collection High Visibility, Nike deliver four explosive and attention demanding colourways for their well-known and very popular silos. 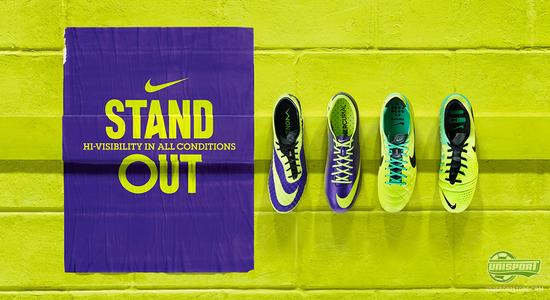 Hereby, there is no reason to fear getting lost in the dark, and even when the autumn is showing its windy, rainy and grey sides, you will still be able to stand out in the crowd and demand attention on the pitch. Based on thorough consideration, Nike have chosen to go wild with some bright, sharp and very contrasting colours for their latest technologically advanced boot silos, so there is no more hiding on the pitch. 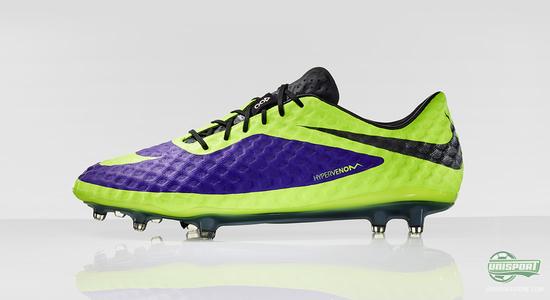 The thought behind Nike's new collection, also known as Hi-Vis, is to stand out in the crowd and proudly display your qualities as at football player. This can, for example, be nicely facilitated by the latest colourway of Nike's latest silo, the Nike Hypervenom Phantom. The boot, which was launched last summer, will carry the unique colour combination of Electro Purple/Volt-Black.

Are you looking to get your hands on the new Nike Hypervenom Electro Purple/Volt-Black, then you can already now pre-order the boot right here  prices from 192. 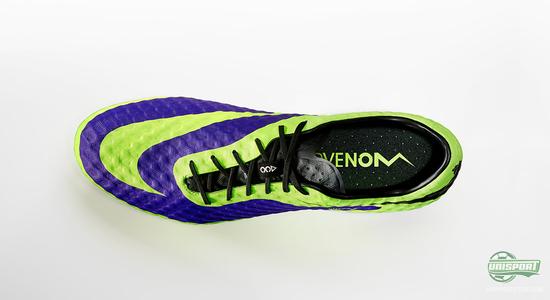 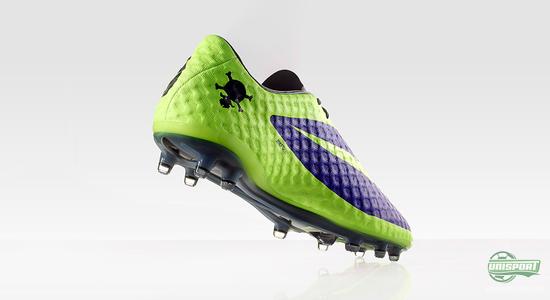 The Nike Hypervenom Phantom has, in record time, become a true superstar favourite, and we have already seen players like Zlatan Ibrahimovic, Neymar and Wayne Rooney wearing the boot that has been designed for the lethal attack. And there is no denying the danger that will be present when you challenge defences with these new flamboyant and aggressive colours, and if you have the skills and strike of Neymar and Zlatan  why would you even wanna hide? 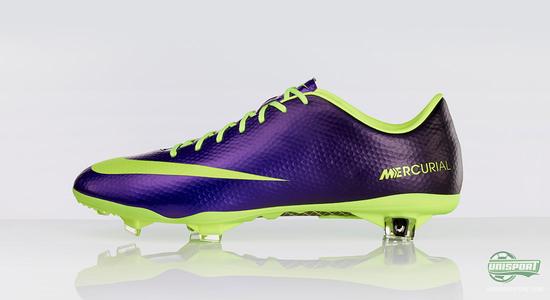 If you put on Nike's speed boot, the Nike Mercurial Vapor IX you will definitely not disappear in the crowd and look like the next substitution. The boot's upper is dominated by the bright and contrasting purple, which is combined with a sharp neon volt colour resulting in a true explosion of colours as you travel across the pitch.

Are you looking to get your hands on the new Nike Mercurial Vapor Purple/Black/Volt, then you can already now pre-order the boot right here  prices from 192. 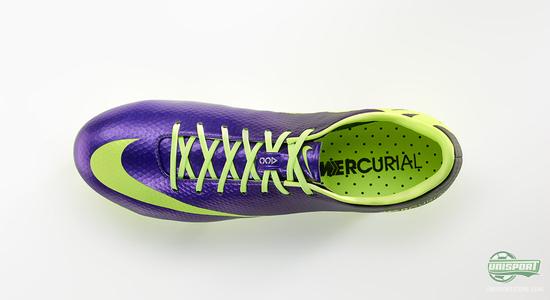 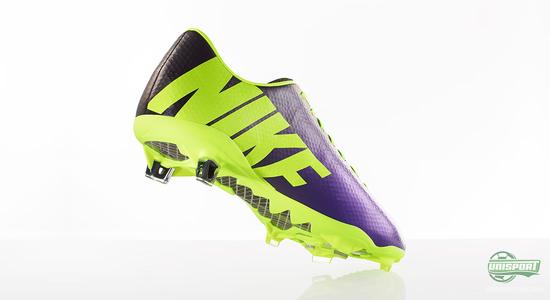 It is very likely that all opponents will ever see of the new Nike Mercurial Vapor IX, is a purple and volt coloured flash of light, as you are charging against goal. With just 185 grams, the boot almost just feels like a feather on your foot, and it has been carefully designed to match the demands of the lightning fast players such as Theo Walcott, Franck Ribéry and Cristiano Ronaldo. 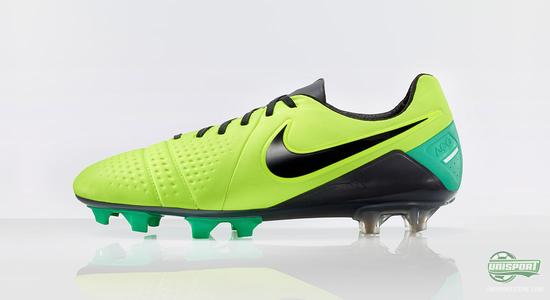 With the new High Visibility series, you don't just play to be a regular player in the crowd but to be remembered. And even though the midfield general is not usually the player who attracts the most attention, there is no reason to hide. The control boot Nike CTR 360 Maestri III has been splashed with colours, just as its brothers, and the boot is now ready to control the game with the Volt/Black/Green colourway.

Are you looking to get your hands on the new Nike CTR360 Maestri III Volt/Black/Glow Green, then you can already now pre-order the boot right here  prices from 192. 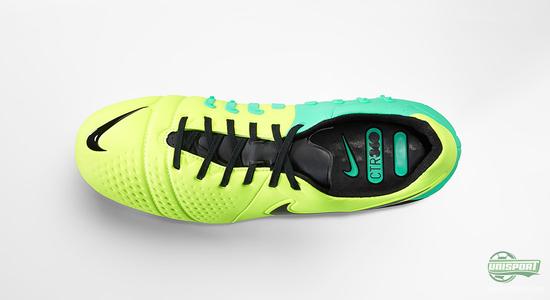 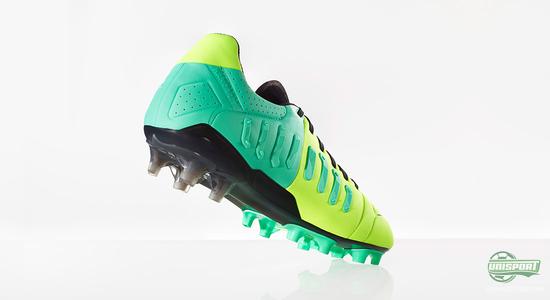 It is not without reason that the Nike CTR360 Maestri III has become a modern classic, which is preferred by a long list of different star players. The midfield generals such as Jack Wilshere and Iniesta wear this boot as they set the scene, but also more offensive players such as Mario Balotelli and Alex Oxlade-Chamberlain are faithful wearers of the Maestri. Maybe we will even get to see the Italian wonder kid Mario Balotelli in this new colourway? He is certainly not afraid to stand out. 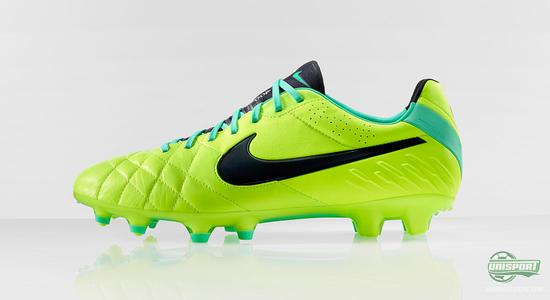 The ability to both be faithful to the classic virtues and at the same time innovative is something that Nike have managed to master with the leather boot Nike Tiempo Legend IV. The leather is mde from an absolutely excellent material, and with the Nike Tiempo Legend IV, Nike have created a boot that focuses on comfort and sublime touch, while also being optimised for the demands and needs of the modern football player. And even you are you just as classic of a player as the game itself, there is no reason why you shouldn't still be in with an opportunity to stand out on the pitch. Therefore, the Nike Tiempo Legend IV has also been given a colourful makeover with Volt/Green colours.

Are you looking to get your hands on the new Nike Tiempo Legend IV, then you can already now pre-order the boot right here  prices from 142. 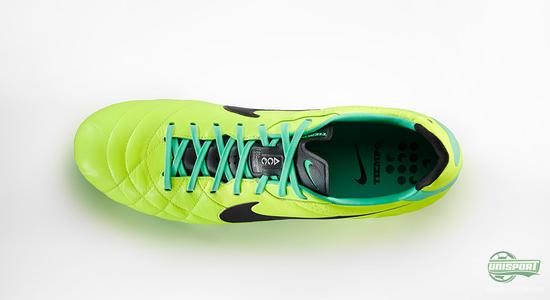 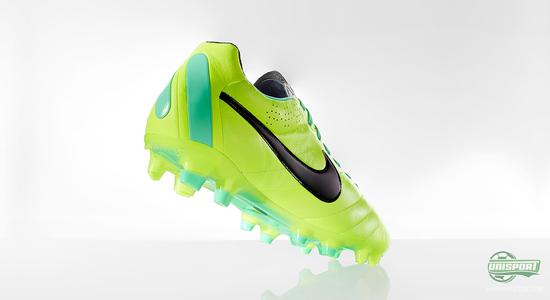 If you in any way would doubt the qualities of the Nike Tiempo Legend IV, then you can just take a look at the players who wear it. Sergio Ramos, Ashley Cole and Andrea Pirlo are just a handful of the professionals, who are faithful to classic Tiempo Legend IV. And with the new colourway for the Tiempo Legend IV you will stand out, just as a free-kick from Pirlo that curls itself into the back of the net from great distance.

The new Nike High-Visibility collection is born to stand out and raised to light up the pitch. The inspiration for the colours come from the 2010 world cup in South Africa, where the football joy, the passion and the will was shining as bright as the African sun. And now that the sun is drifting away, the Nike High-Visibility collection will come in handy to help light up the dark autumn pitches. Here at the Unisportstore Headquarters, we are very excited about the new collection, and in the coming days we will also take a closer look at each of the boots, so you might wanna keep an eye on the site.

Nike have seriously been splashing the colours and the result is a new collection that is born to attract attention on the pitch. What do you think of the new boot collection? And which boot is your favourite? Feel free to leave a comment either here, or on Facebook and Twitter.