The weekend gave us quite an amount of incredible football, and on top of that we also got some nice boot spots, where we will look at boots all the way from the Manchester derby to Moscow. So strap yourself in and come along and check out our boot spots from the weekend, including a surprise or two. 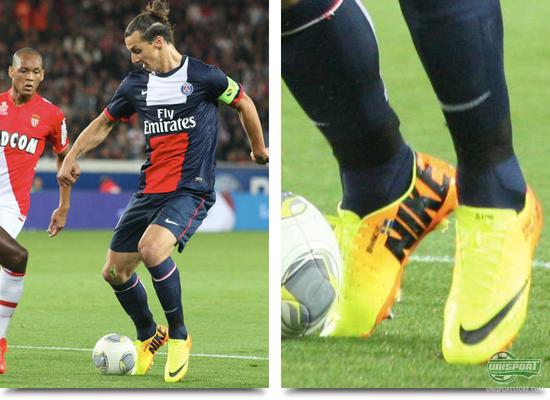 Zlatan Ibrahimovic (Paris Saint-Germain) . Nike Mercurial Vapor IX Volt/Black-Bright Citrus Zlatan Ibrahimovic is one of Nike's top profiles, and until this week we have seen him wearing his new Hypervenom boots, which he has been a key figure for in terms of the marketing. Anyhow, Zlatan has now made the switch back to his Mercurial Vapor IX Volt/Black-Bright Citrus, that the Swede seems to be very fond of. The question now is, was this a one-time thing, or is Zlatan really back in his Vapors? 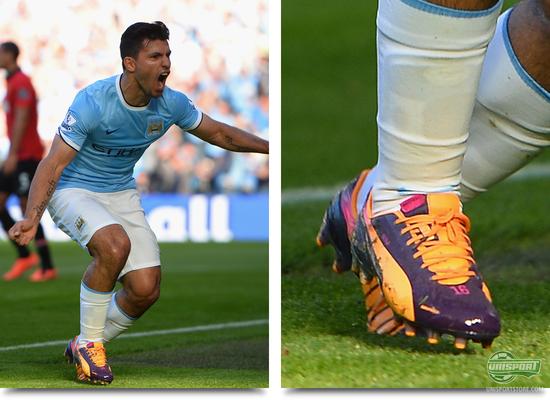 Sergio Agüero (Manchester City)  Puma evoSPEED 1.2 Purple/Yellow Yesterday, Manchester City hosted the champions from United, and in this fixture a certain Sergio Agüero stole the show. Manchester Uniteds 'curse' had not been tired down by Usain Bolt after their little media stunt last week, as he managed to find the back of the net twice in his new Puma evoSPEED 1.2 with the cheeky new Purple/Yellow colourway. A rather impressive way to launch your new boots we have to say. 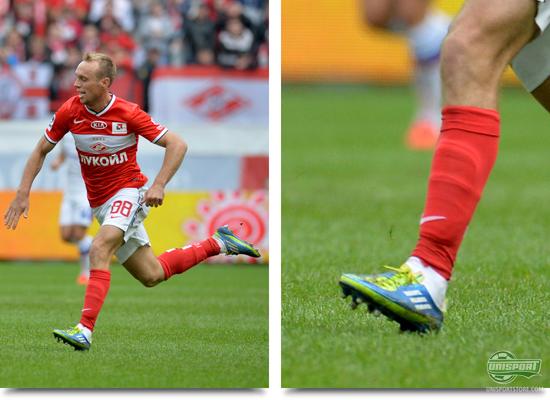 Denis Glushakov (Spartak Moscow)  Adidas F50 Adizero Prime Blue/Green It was not just in Manchester we had two local rivals clashing, as we had CSKA and Spartak of the Russian capital of Moscow present another derby. For CSKA we could see Denis Glushakov wearing an old pair of Adizero Prime, which to this date is still the lightest ever mass produced football boot. Glushakov doesn't seem to care that the Adizero has gotten two new generations since the Prime model, and still keeps going in his super light Adizero. 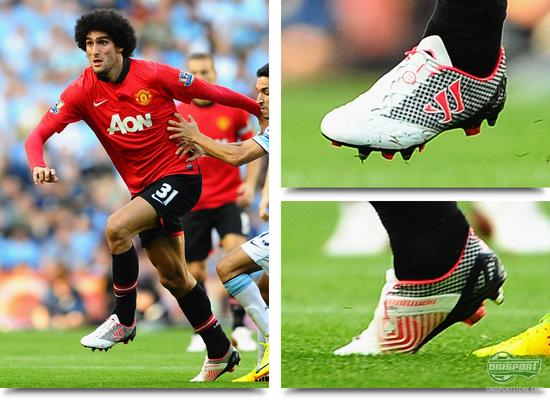 Marouane Fellaini (Manchester United)  Warrior Sports Gambler White/Black/Pink The tall Belgian may have wanted a different first Manchester derby, and although Fellaini was wearing his new colourway of the Warrior Sports' control boot, Gambler, little did it help, as United got beaten by 4-1. 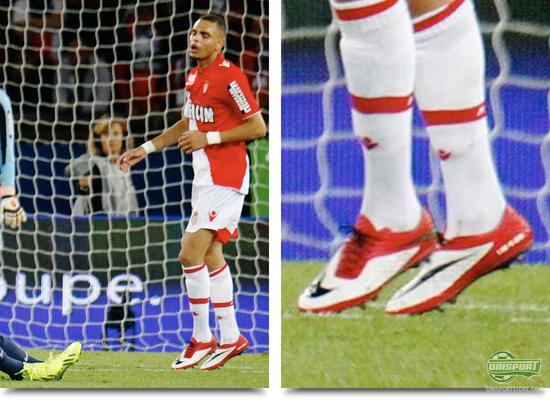 Layvin Kurzawa (AS Monaco)  Nike Hypervenom Phantom Custom White/Red/Black In the big clash between Paris Saint-Germain and AS Monaco, it was not only Zlatan's boots that caught our attention; Monaco's young left back Layvin Kurzawa wore a pair of custom Hypervenoms, that matched the Monaco colours just perfect. 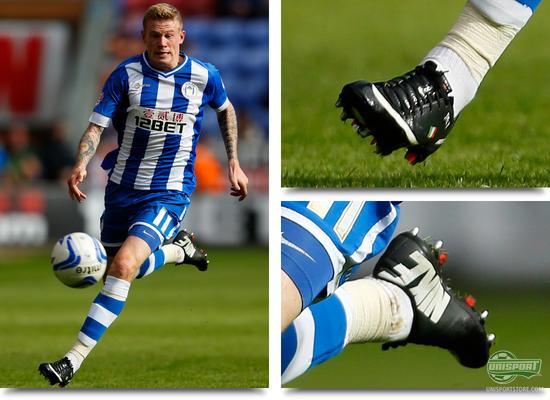 James McClean (Wigan Athletic)  Nike Mercurial Vapor IX Stealth If there is one man that we are certain to keep an eye on in relation to our boot spots, it has to be James McClean  and the former Sunderland player did not disappoint over the weekend, as he wore the black and white Stealth version of the Vapor IX, which is not often seen on the feet of the pro's. 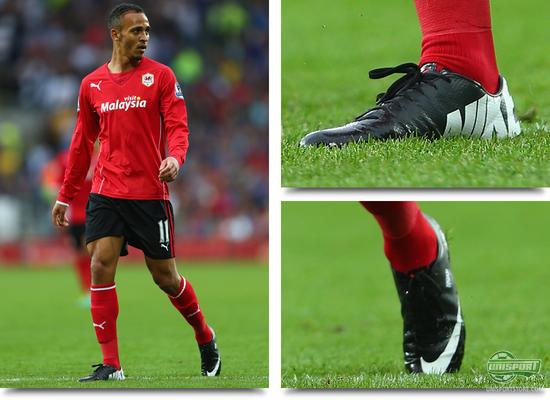 Peter Odemwingie (Cardiff City)  Nike Mercurial Vapor IX Stealth .. except for Peter Odemwingie from Cardiff City, naturally. This man is not afraid to switch clubs and is now in Cardiff, where he has equipped himself with the classic and toned down colourway of the Vapor IX, which has been well received, and is also a personal favourite for me  pure class. 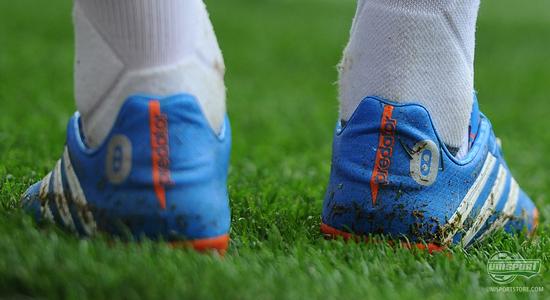 Mesut Özil (Arsenal)  Predator LZ II Blue/Orange/Running White The small and technically gifted German has taken the Premier League by storm, and in the weekend Özil was the man behind no less than three assists. He did this in his Blue/Orange/Running White Predator LZ II's, that have been customized with his personal logo made by Adidas. Özil said at the reveal of the logo that he thinks it's cool - especially because it also looks like the number 8 - his number when playing for the German national team. 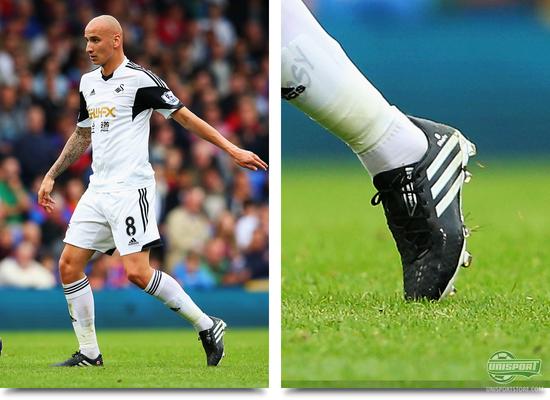 Jonjo Shelvey (Swansea City)  Predator LZ II Black/Black/White We have often times seen Shelvey wearing black or completely blacked-out boots, and he has also been wearing the blackout version of the Predator LZ for a while. This weekend showed to be the time to switch things up for the young Jonjo, and he stuck to the black style and wore a custom Predator LZ II in a Black/Black/White colourway, resulting in a nice and classic display. 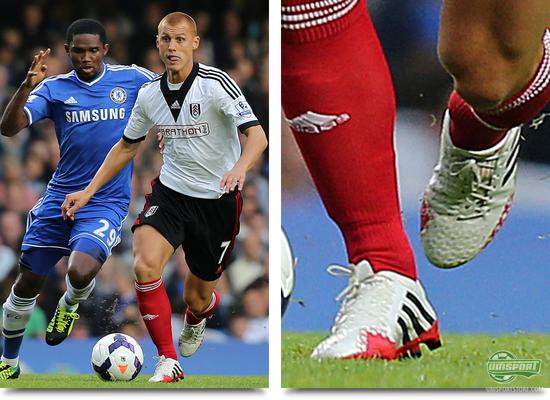 Steve Sidwell (Fulham FC)  Predator LZ II White/Black/Red Now we are on the subject of colourways that we don't see on the pro's very often, then this White/Black/Red Predator is a good example. The colourway has been well popular on our online store, but we haven't seen much of it on the very big scene. Over the weekend, Fulham's Steve Sidwell did, however, display the white Predator, which is an exceptionally nice match with the Fulham kit. 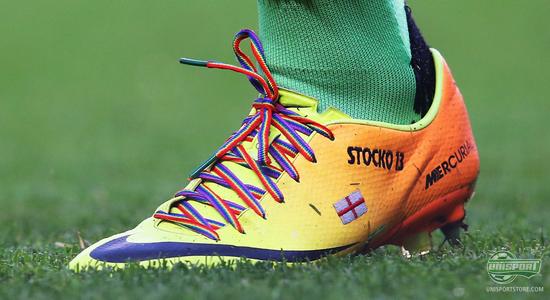 David Stockdale (Fulham FC)  Rainbow Laces Over the weekend we saw a campaign against homophobia in English football, where all the players got rainbow coloured laces sent to them, thus enabling them to show their support for the campaign. Fulham goalkeeper, David Stockdale, took this opportunity in the Cottager's match against Chelsea, and hereby joined players like QPR's Joey Barton and Shaun Wright-Phillips in the support for the cause. 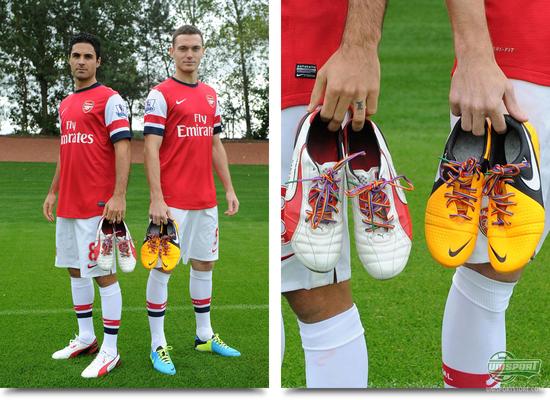 Mikel Arteta and Thomas Vermaelen (Arsenal)  Rainbow Laces The the fight against homophobia also found support from Arsenal players Mikel Arteta, Aaron Ramsey, as well as Thomas Vermaelen, who were all displaying their rainbow laces. The gentlemen did now wear the laces in game, but still showed their support by having their picture taken with the special lacing. 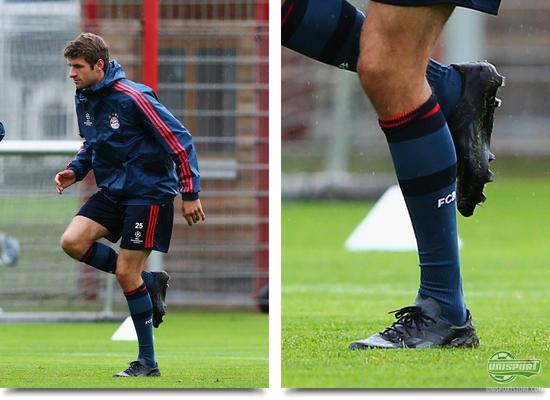 Thomas Müller (FC Bayern München)  Adidas blackout prototype Although this picture may be from the end of last week, it still makes it into this weekend boot spots. German Thomas Müller was spotted training in blacked-out boot, that we have also seen on the feet of Karim Benzema. Müllers boot has got a heel counter that is very similar to that of the Adidas Adizero, and also seem to have an upper that is 2-split, as well as having the famous adidas stripes along the nose. Only time will tell what Müller is wearing, but considering the heel counter it could very well be a new Adizero. What do you think?

With a lot of exciting spots from Zlatan back in the Vapor IX, to Müllers unknown blackout and Agüero's impressive début of his evoSPEED, this round sure was a true treat. But what do you think of Zlatans switch and Müller prototype? Let us know in the box below, or on Facebook and Twitter.