Nike Tiempo Legend IV ACC Black/White/Electric Green is the second colourway of the classic boot, which we can now reveal to you before the end of the year. It comes with a more typical black colour, but is spiced up with an eye-catching electric green colour, which can also be found on the new Nike T90 Laser IV. 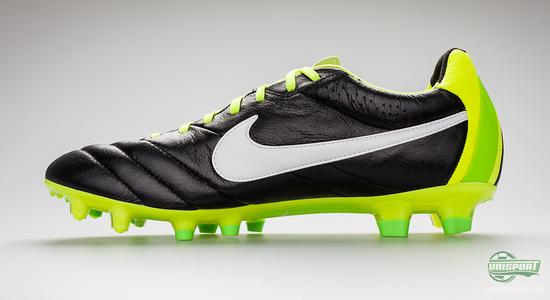 Nike Tiempo Legend IV is the American's version of a true classic kangaroo leather boot, which is still able to compete with the modern alternatives. With this generation, Nike have updated their Iconic Tiempo collection with everything from a new stud configuration to a redesign of the tongue. We will, of course, take a closer look at the changes right here, as we take a closer look at the boot.

You can already pre-order your own pair of the Nike Tiempo Legend IV ACC Black/White/Electric Green right here with expected delivery in the beginning of January 2013  just 147. 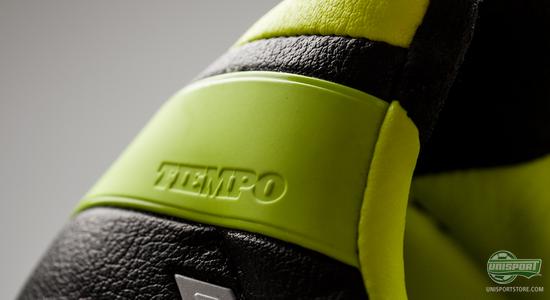 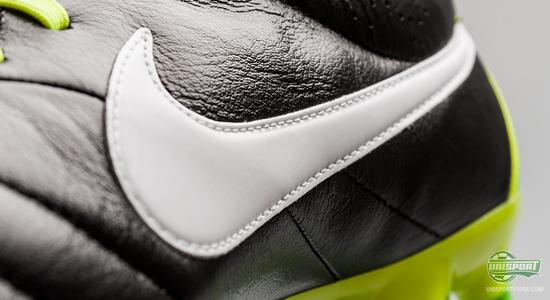 It has become kind of a tradition for Nike to always launch the Tiempo legend in a Black/White/Greenish colourway for each boot generation, and now the time has come for this fourth generation. For this generation Nike have chosen a rather flashy electric green colour on the heel, the tongue, and all over the bottom of the boot. At first you would think that flashy colours could distort the classic and more oldschool ideals of the boot, but Nike manages to implement it with great success. 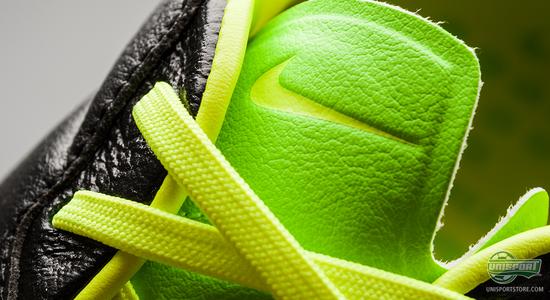 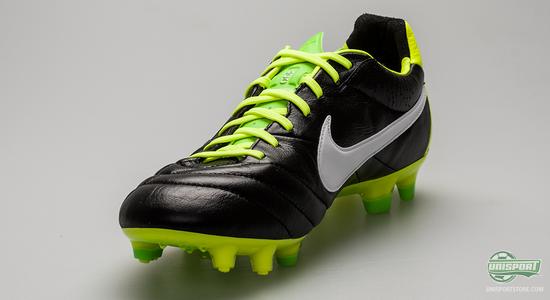 On the Nike Tiempo Legend IV Nike have given up the classic tongue, which could be folded on top of the lacing. This decision was made in cooperation with some of the professional players who wear the boot on a daily basis. The result is a closer touch on the ball, meaning that you will have more control. The tongue has also become one of the key design features, as it has gotten the cheeky eletric green colour. 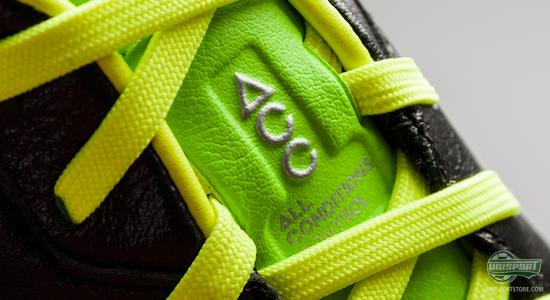 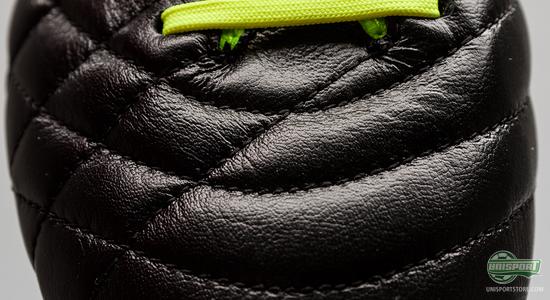 Nike tiempo legend IV sticks to its roots in terms of having a super nice kangaroo leather upper, which ensures an incredible level of comfort and a very elegant touch on the ball. During the tanning process, the leather is equipped with Nike's ACC-technology (All Conditions Control), which ensures the same ball grip in wet weather conditions, as you would have in the dry. This is a huge advantage, especially when the weather is showing its more wet side. 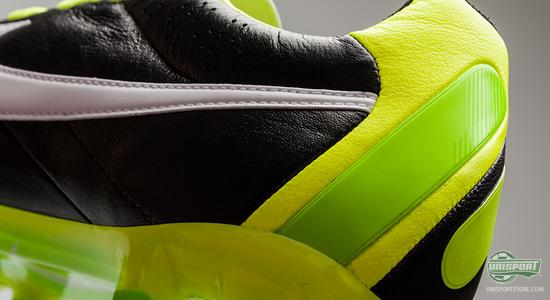 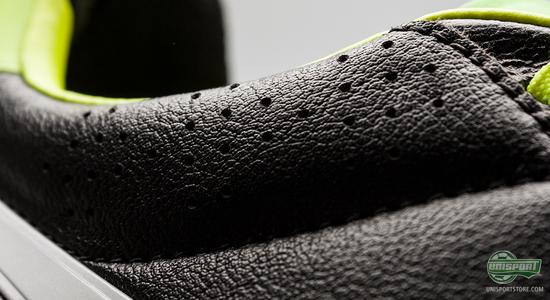 Kangaroo leather uppers seem to be disappearing from the boot market, thus leaving the Nike Tiempo Legend IV as one of the few remaining alternatives. You could say that this adds some extra pressure and expectations to the boot, but the legend IV delivers and puts all doubters to shame. The comfort is among the very best on the market, and the upper provides that soft touch that a lot of footballers value highly. 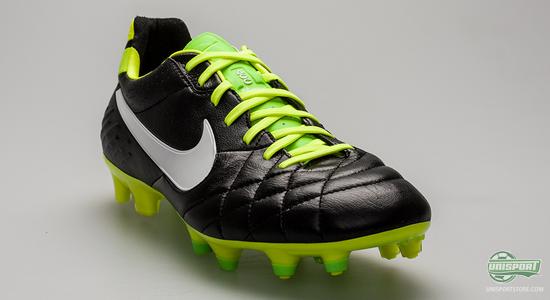 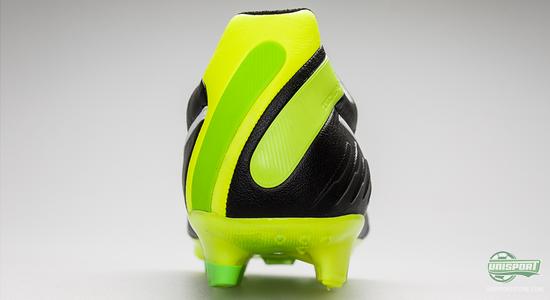 This is further strengthened by the strategically placed stitching on the forefoot. The result is a leather upper that flexes in the best possible way in connection with the natural movements of the foot. Hereby, the upper will not fold in an unnatural way and reduce your touch on the ball. Instead, the kangaroo leather will ensure that you have the optimal ball contact regardless of your foot posture. 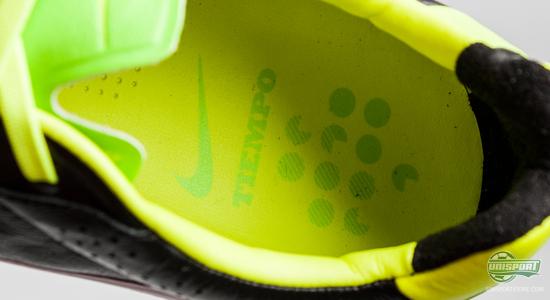 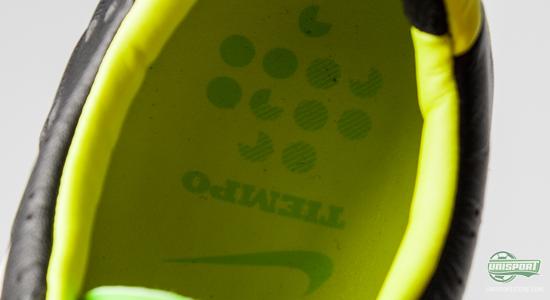 In the, already soft and comfortable heel, Nike have gone even further to ensure that you will not get blisters from this boot. They have lined the inside with a suede-like material, which makes the Nike Tiempo Legend IV feel like a dream when you step into it, and we will go as far as to say, that it is almost impossible to get blisters with this heel. 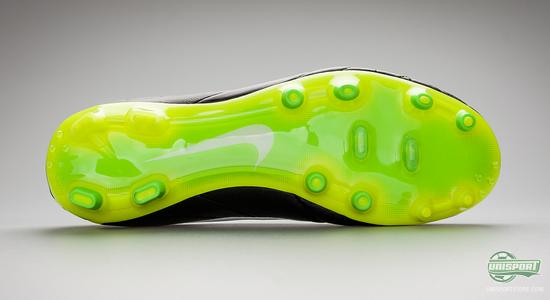 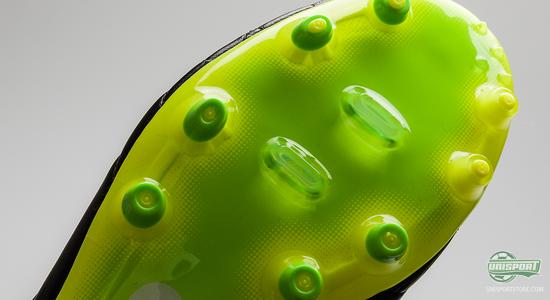 The outsole is not to miss, and not just because of the rather flashy electric green colour that catches your eye right away. The outsole, including the stud configuration, is a very deliberate piece of technical engineering. The light outsole is strengthened by two torsion bars across the midfoot, which, together with the stud configuration, deliver the optimal condition for acceleration. The rounded studs and blades creates a great synergy of stability, comfort and pitch grip, which may very well provide that edge that lets you be first on the ball.

You can already pre-order your own pair of the Nike tiempo Legend IV ACC Black/White/Electric Green right here with expected delivery in the beginning of January 2013  just 147.

Nike have certainly updated their boot catalogue for the new year, with two new colourways for Nike Tiempo Legend IV, a new one for the T90 Laser IV and the CTR360 Maestri III also. All that is left is the ever so popular Mercurial collection. What do you think Nike will bring next? And what do you think of the new colourways? Feel free to share your thoughts in the comment field just below.