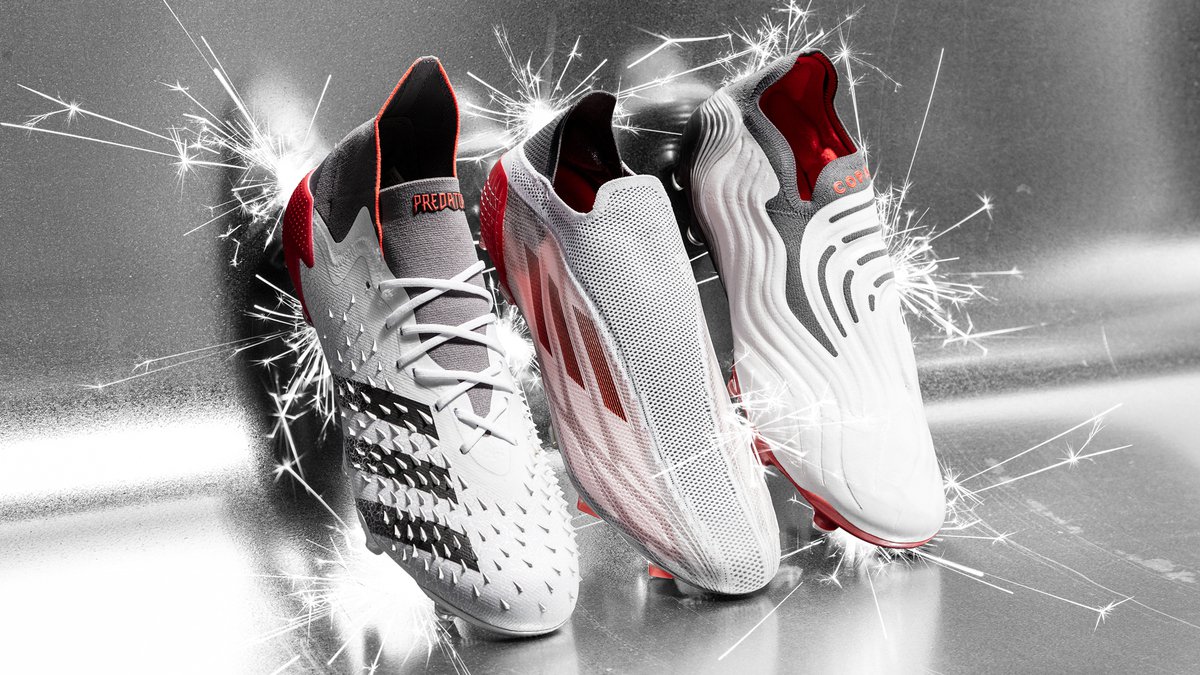 The latest boots from adidas are made in a sleek white, grey and red design. Made to light up the pitches around the world. Check them out right here!

adidas and colourful boots go very well hand in hand. So far this year we’ve already seen the Meteorite , Superspectral and the Superlative collections from the German brand - just to name a few.

And now it’s time for yet another colour update. This time the boots are white, which is always a good thing if you want to make spectacular football boots. They are called WhiteSpark. They are made for you to light up the pitches while playing!

That sounds pretty interesting to be honest. So let’s take a look at the boots and talk about them after the following pictures.

All the boots in the WhiteSpark collection are white (hence the name) but with a hint of grey details. And we will start out by looking at the X Speedflow. The white/grey base is accompanied by red adidas stripes on the side and a cool and shiny soleplate with golden details as well. The heel cap is kept in a solid grey colour with the ‘X’ branding on it.

The upper is made with Primeknit Skin on the outside and stabilized by the Agility Cage on the inside to give you the maximum support during changes of direction while running. The soleplate is the Carbon Fiber Speedframe which means that the weight is ultra low.

The grey and white colour scheme is also seen on the Predator Freak. The base is white while the adidas stripes are kept in grey as well as the collar. The Demonskin spikes are silver. And the red part is seen on the heel and soleplate.

The Predator Freak is still the same. Covered in rubber spikes (The Demonskin) to give you an unbelievable touch and control of the ball. The Primeknit collar gives you the best stability and comfort we’ve seen on a Predator.

Of course the Copa Sense is also made in white, grey and red colours. The leather of this boot is white while the Primeknit areas are grey. The soleplate is a nice mix where it goes from grey in the heel to red at the toes.

Copa Sense is filled with ‘sense pods’. These are made for you to feel more comfortable than ever. The pods are to be found on both the inside and the outside of the boots - pretty cool!

If you, like us, think these boots look amazing, you can find them at Unisport and cop them before everyone else on pre-sale!

So hurry up - check out the adidas WhiteSpark boots right here