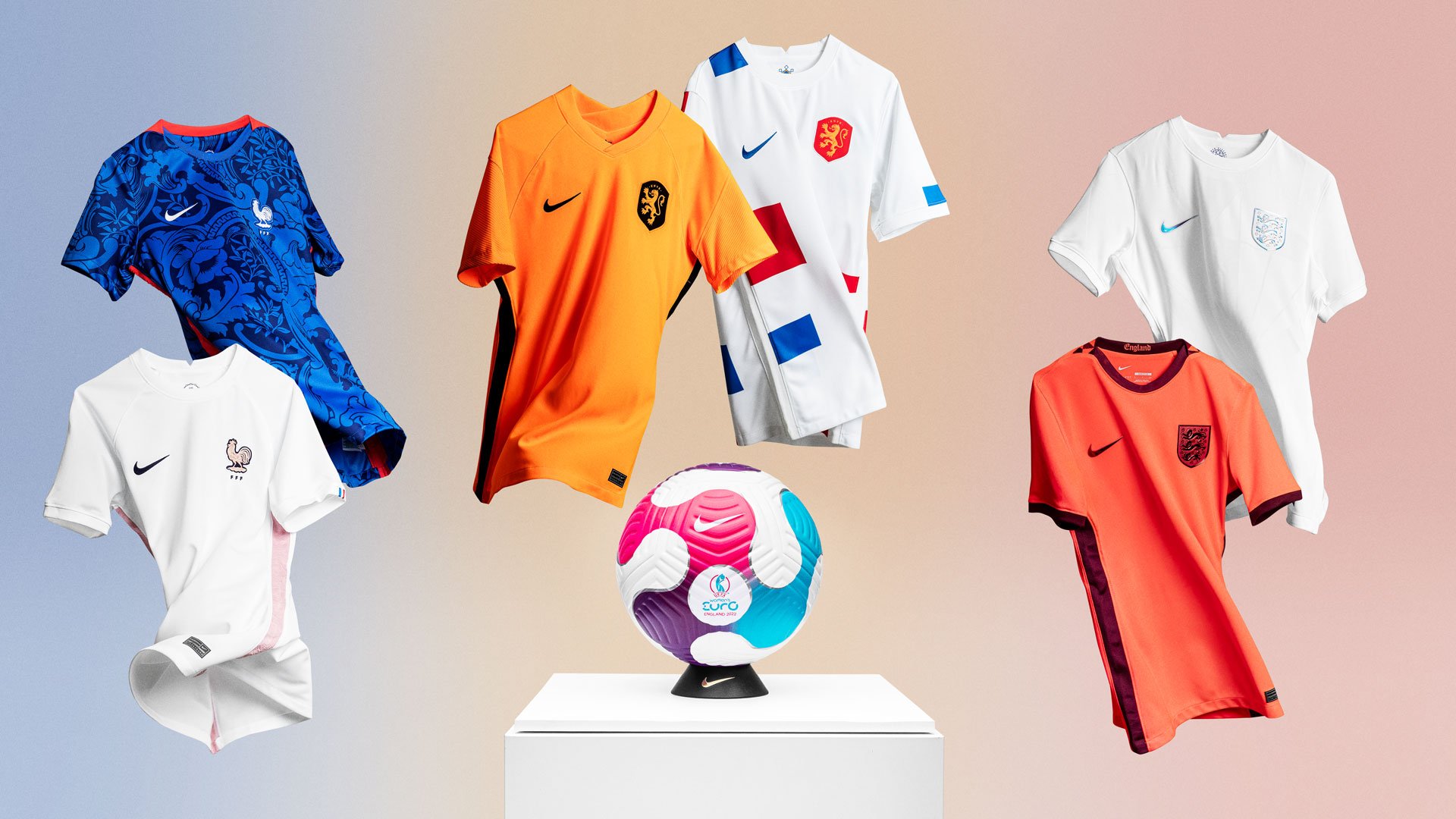 With only a few months until the Women’s EURO 2022 in England, things are beginning to heat up. Presenting a total of 6 new kits - three home and three away alongside the official match-ball, it is safe to say that Nike are ready for the European Championship!

Nike are presenting the kits of three teams at this summer's EURO’s - and it is safe to say that these teams will all be looking to make a run for the championship. With England, France and Netherland wearing the Nike swoosh, the chances of a EURO 2022 medal worn in a Nike kit seems pretty destiant. And we are in luck, because with a new unique bespoke design for all their kits, players like Lucy Bronze and Lieke Martens will be taking the pitch in style.

The EURO 2022 will kick off on the 6th July when host nation England takes on Austria at Old Trafford. The final will be like last summer’s European tournament, as it will be played at Wembley. For the full Women’s EURO 2022 schedule we here at Unisport got you covered. And if you need to know more we have also made a complete guide to the Women’s EURO 2022 groups.

At a first glance the new England Home shirt might not stand out, but this shirt is truly unique. The ‘Three Lions’ on the heart have been swapped for ‘Three Lionesses’ - as the England Women’s team is called ‘Lionesses’. But the stand out of the new Home shirt is the iridescent logo and swoosh, which is the first time ever an England shirt has featured such. The eye-catching blue metallic iridescent changes in the light, which will be giving it a distinctive look when the floodlight hits it. While the iridescent is the stand out on the shirt, the white base is understated with a very subtle geometric design - giving it the perfect combination of class and splash. To finish it off the inside collar has the slogan ‘’Send Her Victorious’’ written from the national anthem. Hate it or love it, this might be the most original kit we will see at this year's EURO’s.

The England Away shirt is a bright orange with a very subtle triangle graphic on the rear collar - while the collar, cuffs and side panels are kept in a very classy maroon, which seem to be very popular for both the England national team and clubs this year. The stand out of the shirt is yet again the iridescent. This time they have kept it to only the ‘Three Lionesses’ seeing the Nike swoosh in a normal maroon stitch design. While the ‘Three Lionesses’ were a metallic blue on the Home shirt, the Away shirt is a Gold and Maroon iridescent color. Bold choice for the Lioness as wearing a golden logo on the shirt demands results on the pitch. Take a look at the shirts below.

Mixing it up from the 2019 EURO’s France and Nike have made a new Home shirt in a brand new blue color. While the 2019 Women’s World Cup saw a Deep Royal Blue Home shirt this year is a vibrant Hyper Cobalt blue with a Gold Nike swoosh a ‘FFF’ and rooster. With a white and royal blue trim around the chest this shirt is classy, understated and cool.

With an understated Home shirt the France Away kit is everything but. The Pink Glaze color of the shirt is sure to be turning heads while the Golden ‘FFF’ and rooster give it an extra pop. The Nike swoosh is kept in a dark blue, giving it just that little cool - to an otherwise very loud shirt. Take a look at the crazy shirts below

This year's Netherlands Home shirt is just oozing history and legendary players. The defending champions will be taking over the pitch in the orange that we have got to know and love. Like Englands ‘Three Lionesses’, the KNVB Lion has been changed to a special Lioness in the black shirt logo. Finishing off the shirt is an overlapping v-collar. With last EURO’s Best Player Lieke Martens trying to defend her title, this shirt is definitely a contender to be lifting the trophy on the 31st of July.

Inspired by the Dutch flag the Women’s Away shirt comes in a very distinct and interesting design. With blue and red rectangles placed all over the shirt in a non-symmetric manner, this shirt is very unique. With a blue swoosh and a red crest with orange lioness this kit is both unique and interesting while still being classy and cool. Topping it off with the clean reverse collar the shirt asymmetry is kept to a perfect balance. Take a look at the shirts below.

Whether it is a European Championship or World Cup we are not used to seeing a Nike ball being used on the pitch, this EURO’s is gonna see a change in that. The match-ball is based on the Nike Flight ball used in the Premier League 21/22. With its white with light blue, pink and purple patches the ball is interesting and playful. The rather unusual and refreshing ball design is sure to make a headline in this year’s EURO’s as it will be used in every match throughout the tournament. Take a look at the eye-catching football below