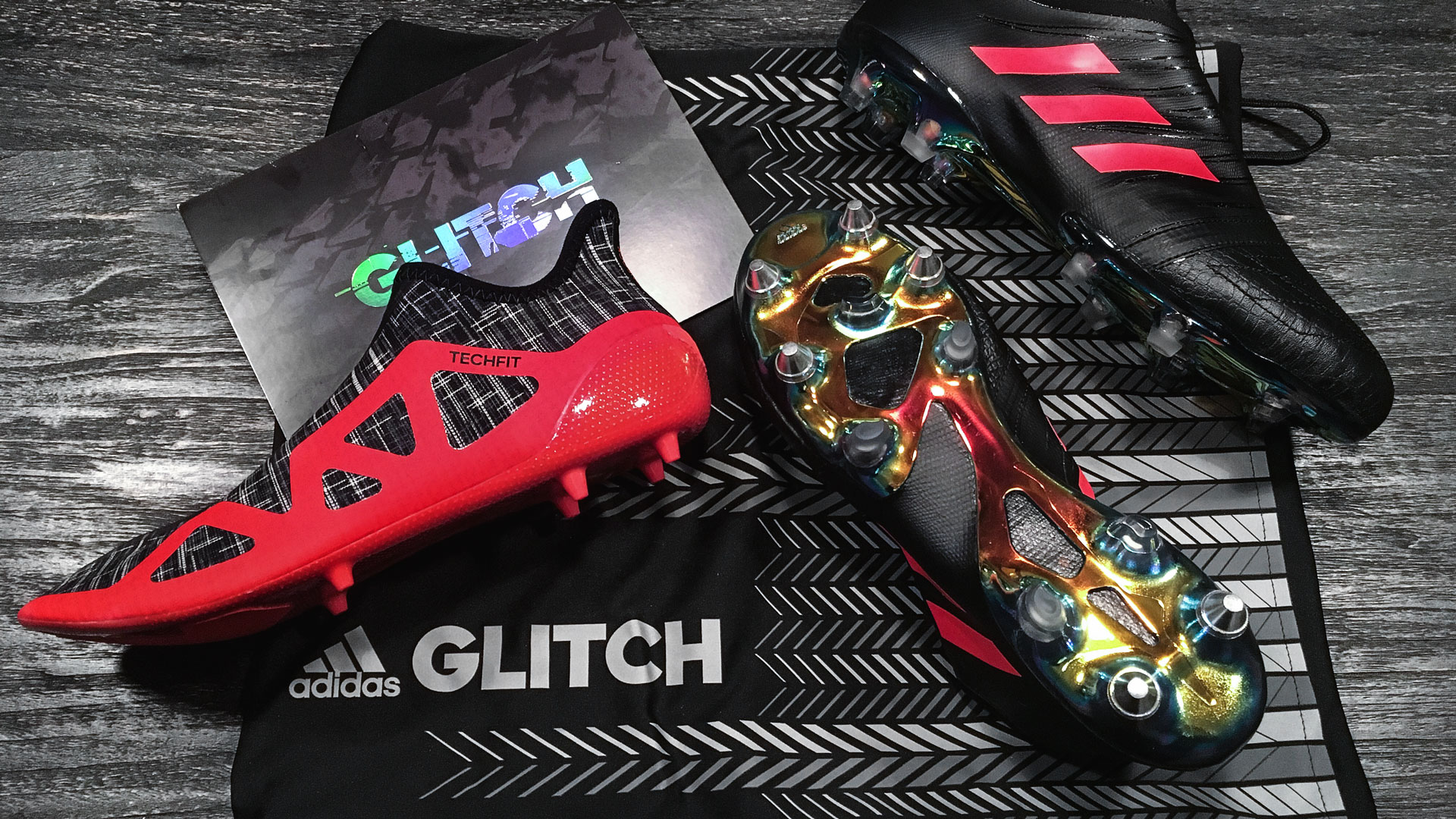 So far a lot has been said and written about the new and mysterious adidas GLITCH launch. However, no one has given a REALLY detailed look and explanation of the boots, but that changes right now!

We have invited adidas GLITCH owner and boot nerd-extraordinaire, Jorma XIV, to share his experiences with the new boots. Put on your reading glasses, because there is quite a lot to get through, but I guarantee you that once you get to the end, you will know everything worth knowing about the concept. Take a seat and join Jorma below.

Also, if you're hungry for more reading material, you can read our piece of Jorma as a collector afterwards here.

Let’s start with the boxes themselves. Tied together like a perfect Christmas present by a black GLITCH ribbon, appears three boxes containing the product. As you undo the bow, you find each box has a cardboard outer sleeve that coats a transparent middle, where you get a first peak at your new boots. You then pull away a white cover with GLITCH emblazoned on it in a multi-coloured screen print, to reveal your boots.

As you take off the sleeve and cover, you open the transparent box and slide out the product, whether that be one of your two chosen outer skins or your one chosen Inner. My first inclination was to take all 3 products out and get an understanding of how the two pieces even fit together. I had no care in the world for visual looks at this point….. Does it work?! YES! Surprisingly, after adidas have spent years developing this, it works and repeatedly it seems.

As I then disassemble the two parts again I take a closer look at the inner part of the boot, or chassis as it is referred to. My choice was the black/grey low cut version with the alternatives being a red or blue high top version, or a white/grey low version. It looks cool, and definitely different, enticing actually, almost like it’s a boot itself, especially as it houses the insole. The best way to describe it is a curved and reinforced sock strapped to a sort of soleplate, which is even called a SprintFrame.

Techfit is written on the reinforcement bonding of the material and I’m hoping that is a good sign from a fit perspective. The toebox looks super sharp, but that being said, the material is still stretchy, nicely cushioned around the heel (the only familiar element in similarity to the X heel) with an outer heel cup. At the same time, the ‘soleplate’ features an anti-slip panel on the forefoot and 6 prongs for engagement towards the rear; The message reads “Compression Sock Insert This Way “ on the heel.

I pop the Chassis on, nice and easy as though it’s been on your foot before. The feel on foot is fantastic, like someone has strapped your foot in for a rollercoaster ride, but also feels comfortable and surprisingly has no toe pressure from that low toe box. The words running down the seam on the top of the ‘sock’ say “4-way stretch” and it certainly feels that way. Definitely a ‘tick’ from me on this part.

Now for the outer, which encompasses the chassis of the boot with an incorporated soleplate. The choices are 3 colours of synthetic; reflective white with black stripes, reflective black with white stripes and red with black stripes, and 1 partially leather upper, which is black with a reddy orange set of stripes, similar to the ‘Warning’ colourway on the Adipower if anyone remembers them. I opted for the partial leather upper nicknamed ‘Reptile Skin - 004’ in FG and SG, mainly because when I tried the boots initially the extra friction from the leather gave such a great touch. That meant I had to bite the bullet and hide my flamboyant side (which really wanted the white reflective pair) in search of the best product for my game, which was by no means a bad choice!

The part that would usually be the midsole and heel cup is remarkably flimsy, which is slightly disconcerting

The outer has a forefoot board, as you would expect for flex and toe off, but the part that would usually be the midsole and heel cup is remarkably flimsy, which is slightly disconcerting; although what you have to remember is, I’m talking about one half of a tandem product here. The structure for the midfoot and heel is built into the Chassis, which is mind boggling really even for a geek like me, but the curvature achieved on the Chassis to follow your foots’ form is a complete win in my book.

The soleplate looks really nice with the oil effect moving from a gold through to red as the light hits it. It is not quite as mirror like on the SG boots, especially around the toebox. The stud positioning on the outer is good, similar to the PureChaos, but not identical. In my opinion it is especially good in the SG format, where the metal studs are actually fixed. The metal elements of the studs are actually shorter than the ones on the PureChaos, but this doesn’t affect the overall length, as more of the stud itself has been built into the plate. From the naked eye this seems to give an even better angle to be honest.

The leather portion of the upper feels nice and thin, and is pliable straight out of the box. The way it knits to the synthetic instep feels seamless. There are small dots or raised bumps on the upper to help with ball control, as well as slight cuts on the instep pattern to thin the material out and ensure that the area has enough stretch to cope with the foot coming in and out of that area repeatedly. In addition, it subtly displays the glitch logo smack bang in the middle running down the foot.

I enjoyed the PureChaos and PureControl for different reasons straight out of the box, but neither have the comfort level of GLITCH.

Once you combine Chassis with the outer and you feel them pop into place you can see the boot as a whole. It looks exciting to have a boot with no laces and no obvious panel, which is going to stretch to accommodate your foot, because that beauty is all on the inside. As you put the boot on you realise its tight, like really tight, but not uncomfortable. The boot is glued to your foot, completely at one and I immediately start pulling at different parts of the boot to ensure it’s not going to come off. I also start to understand how I’ve got in theory two layers on my foot, although it doesn’t anything feel like it. As you walk around and flex your foot it looks normal to see a boot, but the reality is it feels different. The Chassis/SprintFrame sock is the key and wraps around your foot making the boot feel ‘full’; for me it’s a great feeling, but with this boot more than any other it will depend entirely on someone’s individual perception and desire.

I’ve worn my FG pair for 90 minutes on a night, where the pitch was perfect and they felt great. Good traction and spring from the soleplate, no movement or slip whatsoever between the two layers and the upper had a nice touch on the ball especially from that leather forefoot for close control. I had no issues with blisters or any discomfort. Straight out of the box, it felt like I’d worn them plenty of times before. I enjoyed the PureChaos and PureControl for different reasons straight out of the box, but neither have the comfort level of GLITCH. The only gripe I have when I’m really splitting hairs, is that some creasing occurred on one foot when flexing, but that is literally it and I’m sure the more the outer softens up over time the better they will get. You’ll want to try it out and I don’t blame you either, because it really opens your mind and I don’t think you’ll be disappointed.

There are plenty of stories/rumours going around about how to acquire GLITCH and I’ve certainly had my fair share of requests. What you need is the GLITCH app (which is yet to be released) and a code from one of the initial lucky few who has a pair of GLITCH. Unfortunately there is no ideas on pricing for the starter pack or for additional outer/Chassis'. So stay tuned and remember it’s not what you know it’s who you know.