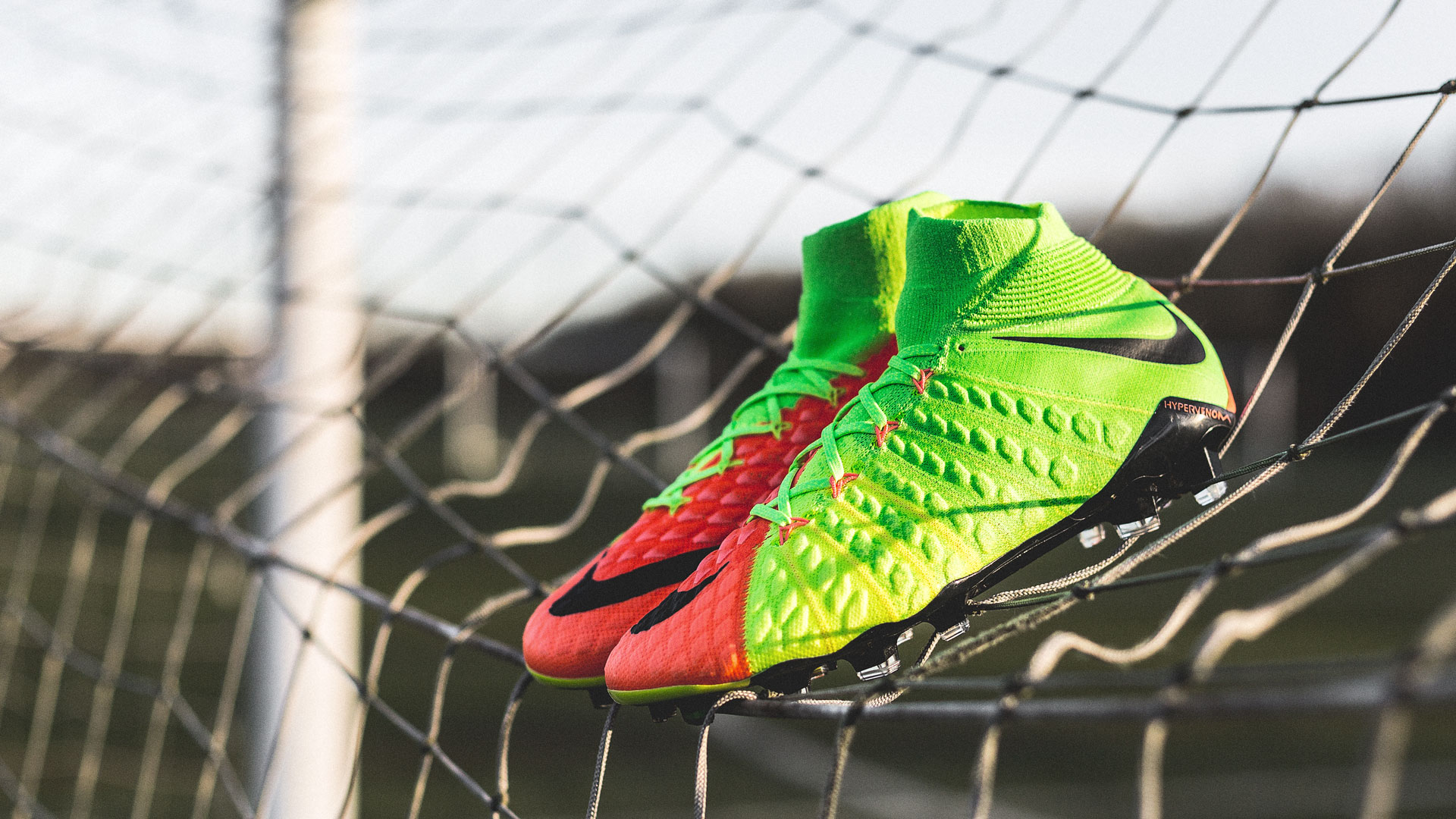 Strap yourselves in for the biggest launch of the year, which is going to be taking over your timeline for the foreseeable future. Nike have radically overhauled the Hypervenom and now present a silo-defining third generation. Read along here for more info on the tech, concept and design.

With the Nike Hypervenom silo it has at times been a little hard to determine exactly what type of player the boots were made for. That changes now, as Nike make big moves towards emphasising the critical components of the boot that really brings out the aggressive sides of it. The new Nike Hypervenom 3 football boots are engineered with your strike, your cut and ultimately goals in mind.

“This is a finisher’s boot. Every component of this boot was built for goals.” - Max Blau, VP of Nike Football Footwear.

The grand makeover is very apparent from the first time you lay eyes on the new attacking boot from Nike, which actually bears very little resemblance to the two previous generations of the silo. The upper, Dynamic Fit Collar, Soleplate and sockliner have all changed, so as you can probably imagine, there is plenty for us to take you through here.

You can sign up for the Nike Hypervenom Phantom 3 right here. Releases for sale on the 30th of January.

The increased emphasis on goalscoring from Nike is most apparent on the upper of the boot. The boot is split into two unique areas that are easy to spot from the colourway. Each zone fulfils and improves the two most vital aspects of goal creation - the cut and strike. These two zones look similar with the 2mm dotted upper, but underneath the 100% Flyknit upper they are constructed differently to suit either space creation on the lateral side (Neon on this colourway) or finishing on the medial side and instep (Orange on this colourway).

Contained within the orange strike zone on the Nike Hypervenom Phantom 3, Nike have incorporated multi-layered Poron® foam pods. This brand new technology is every bit as fancy as the name sounds, and works by making the foam pods that you see creating this aggressive pattern, rate dependant. What "rate dependant" means, is that the pods feel how hard the ball impacts the boot and depending on how hard you contact the ball, two effects occur:

- If you touch or receive the ball at low velocity, the pods create a dampened and soft effect.

- If you strike the ball at high velocity, the pods instead go rigid and create a really firm surface for a more true and precise strike. 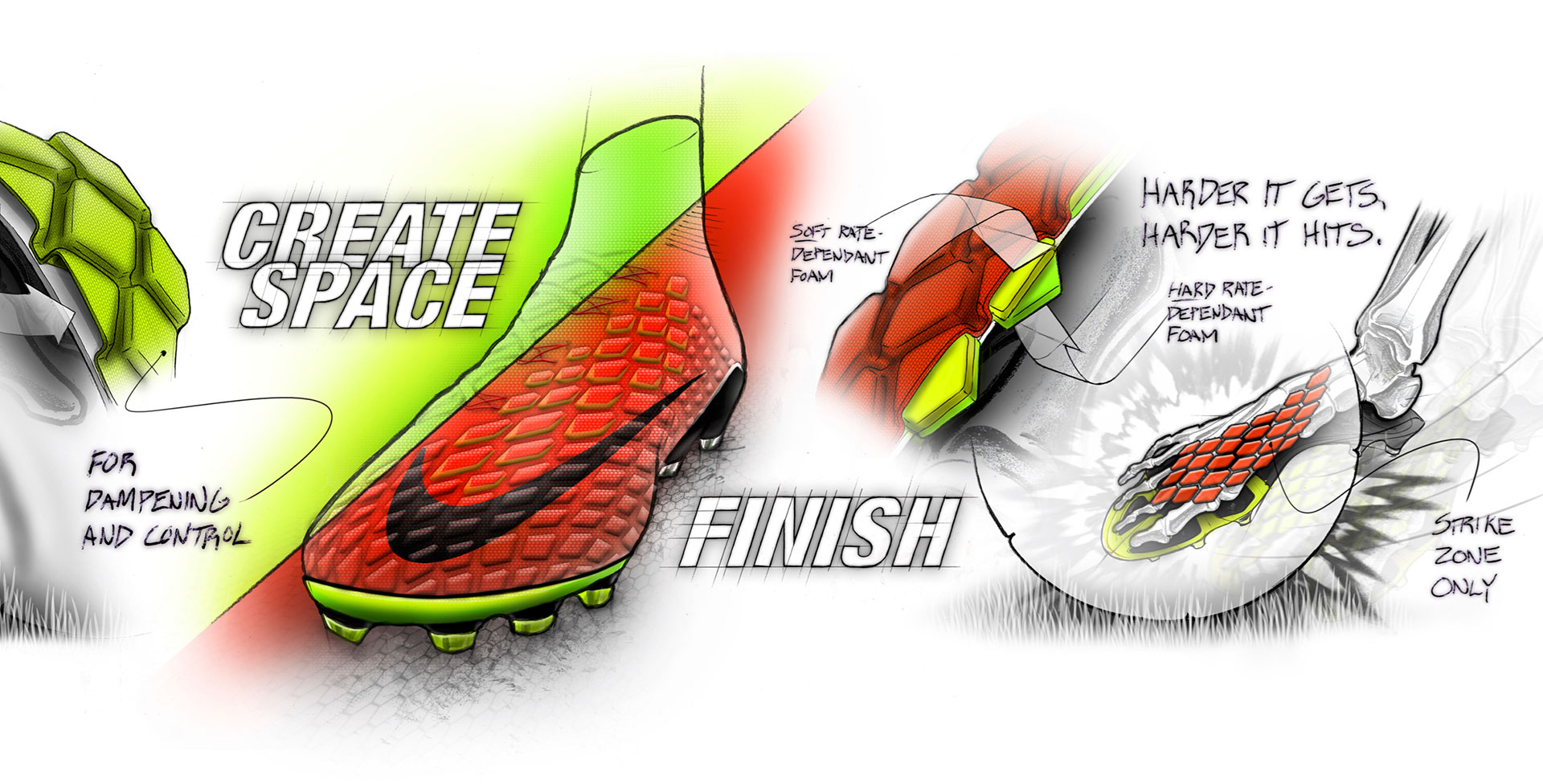 Everywhere except the strike zone, Nike have made the pods on the Nike Hypervenom 3 with dampening and control in mind instead. This means that rather than Soft Rate-dependant foam inside the pods, they are hollow and filled with just air. This simple solution offers a softened touch for control on the ball and the scaly feeling and expression leads the mind back to the original Hypervenom released in 2013.

Nike have on this third generation of Hypervenom switched the boot to a 100% Flyknit construction, just as they did on the Mercurial Superfly V in 2016. On top of it providing great flexibility and softness, the application of Flyknit also allowed the addition of the new multi-layered Poron® foam pods, which is certainly the most important technology. Engineering and utilising the 100% Flyknit upper was absolutely crucial for the creation of this boot.

Having an entirely knitted football boot, which is made for players like the goal-minded attacker creates the need for a fully customisable fit, where you determine the tightness and amount of support. To provide players like Lewandowski, Higuain, Marcus Rashford and Harry Kane with exactly this, Nike leverage their Flywire technology once again, but this time with a mighty three meters of wire used, as opposed to just one. They have used this increase in Flywire to create a special loop lacing system that allows you to fine-tune the fit and create the amount of lockdown you want when performing those sharp cut moves.

You can sign up for the Nike Hypervenom Phantom 3 right here. Releases for sale on January 30th. 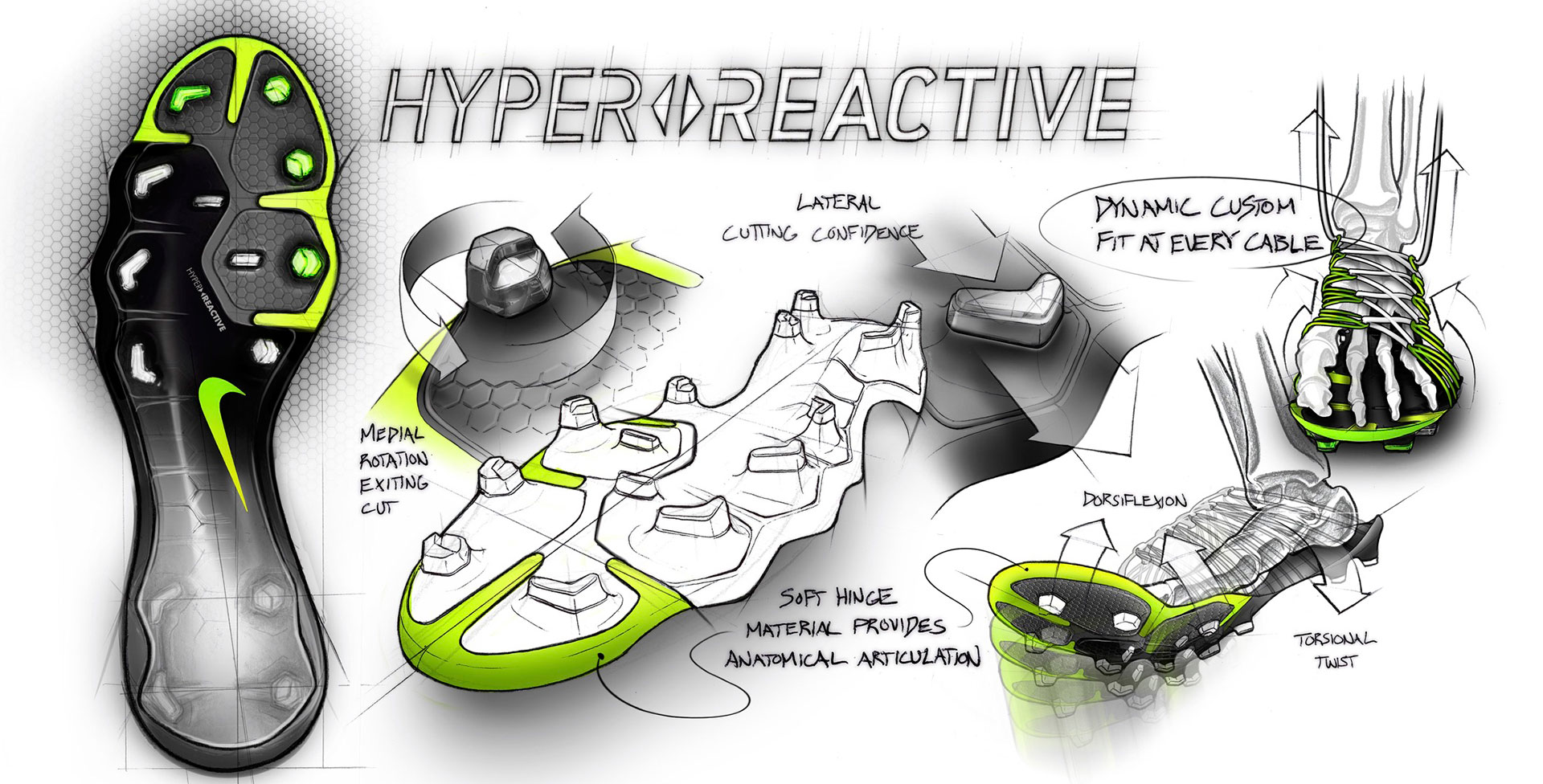 Flip the boots on their head and what meets the eye is certainly also worlds apart from what we saw on the second and first version of the boot. The new soleplate is named the Hyper-Reactive plate and has been under development for a no less than six years, which is well before the first Hypervenom in 2013 and back when strikers were still rocking the T90. The influence of the T90 can somehow still be felt on this Hyper-Reactive design, and that vibe is in no way misplaced, because everything about this Hypervenom 3 is closer to the way players experienced the Nike T90 laser boot. Sharp focus on the ‘cut and strike’-style and scoring goals.

Hyper-Reactive is made with a combination of flexible Pebax material and sturdy nylon. This is based on learning from the Nike Free running shoe, which flexes more in the forefoot and has more stability further up the boot. Nike and the boots designer, Dylan van Atta, discovered that this made your sharpest cuts more stable, as the forefoot would be more in contact with the ground, while the heel was lifted.

In 2016, Nike kicked off what can only be described as a traction revolution, as they launched boots that had been created following extensive FEA data testing. As with the Mercurial Superfly V and with the Magista Obra 2, the stud-configuration on this Nike Hypervenom Phantom 3 comes off the back of extensive data-collection on how to best create a boot for lateral cuts and push-off bursts. Nothing has been left to chance and every single angle of every single stud has been placed, because that was the best possible way to unlock the goal Nike set for this boot. ‘Cut and strike’ is once again the name of the game.

Gone are the days of having just a simple sock. Nike have created an Agility Cuff version of the infamous Dynamic Fit Collar, which mirrors your bone structure in the ankle more naturally. The ankle bones are offset by around 10mm and when you perform the sharpest cuts it puts your ankles in more extreme positions, where you need more support on one side. This is accommodated by this new Nike Hypervenom Phantom 3 construction.

More than 200 prototypes were tried and tested extensively, before Nike completed the Hypervenom 3. The beauty of it is how clear the purpose is and how it allowed Nike to create a football boot with everything aimed at achieving the ultimate performance. If you are your team's goal-minded attacker, then there is no getting around these!

You can sign up for the Nike Hypervenom Phantom 3 right here. Releases for sale on the 30th of January.