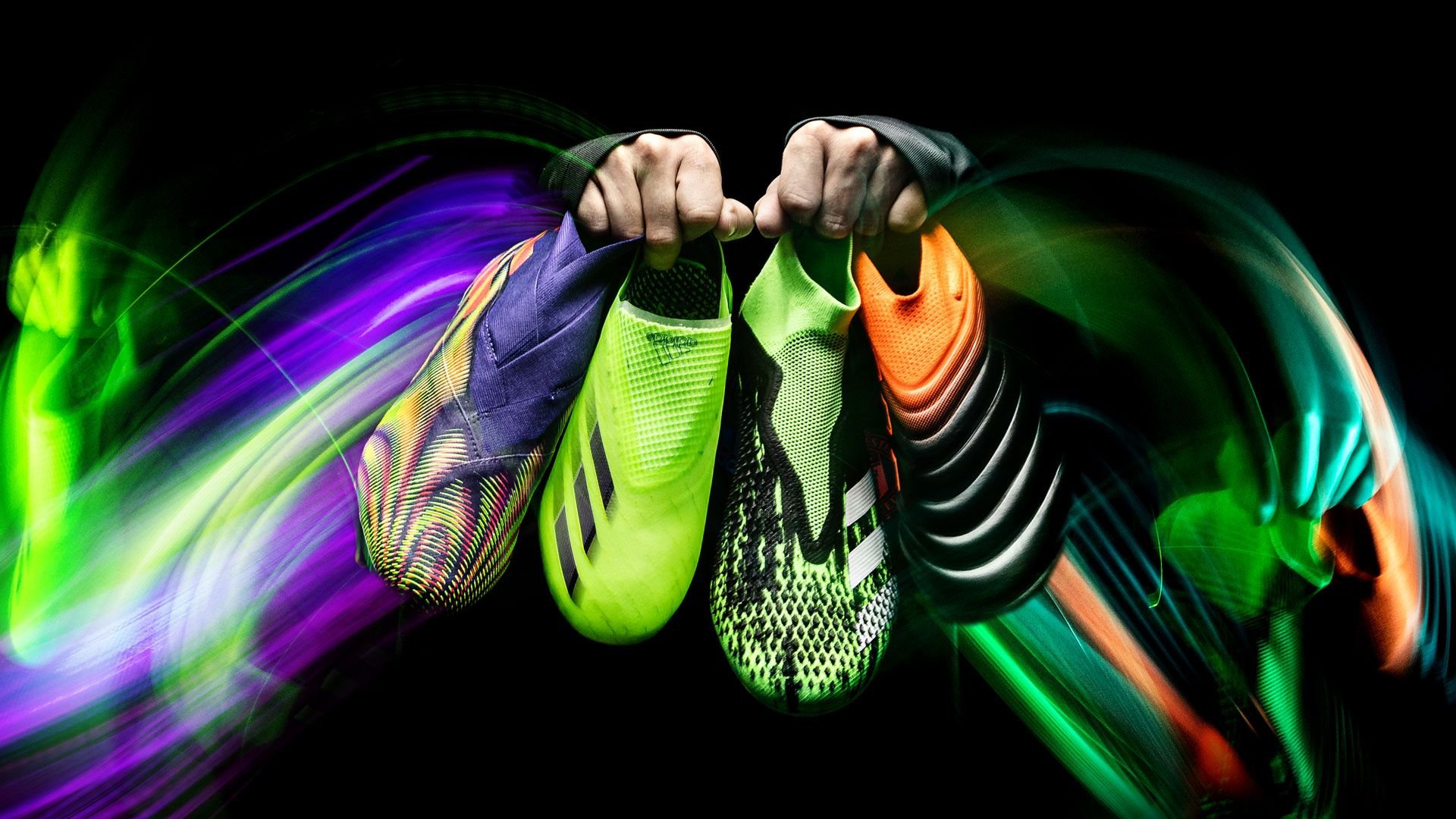 One of the most common sayings in the world of love and relationships is that ‘opposites attract’. Meaning that often you are intrigued by people that are different from you. The new pack from adidas is called Precision to Blur. Two things that usually don't fit together too well. You know; precision and blurriness. But in this case - opposites attract.

Finally! adidas launches a brand new pack of boots - including all of their four silos. We were almost getting nervous about adi’ only wanting to update their boots in pairs, like we saw with Atmospheric and Glory Hunter . And we had another worry too. We were afraid of never seeing a new colourway for the top models of the X Ghosted. But now, we don’t have to worry anymore! Precision to Blur contains new colourways for every single silo - including the X Ghosted. And they all look staggering!

We’ll start off with the new X Ghosted Precision to Blur. It’s made of a green neon base with purple stripes and purple details. That is what we would call a crazy colourway, and it will certainly stand out on the pitches around the world. The X Ghosted + will of course have the Mirageskin upper, which is transparent, so you can almost look right through it. A very nice detail, that you won’t find elsewhere.

Just like we saw on the Inflight, the X Ghosted + Precision to Blur has the carbon soleplate with Carbitex speedframe, which makes you faster than ever. God, we have waited for a new colourway of the X Ghosted + for a long time. But we got to admit it - it was worth the wait.

Next up is the Nemeziz. It’s no wonder why Lionel Messi prefers this boot. I mean, just look at it! The Nemeziz Precision to Blur includes a lot of colours - purple, orange and some kind of multicolour. A boot which really lives up to the blurriness. Not only does the Nemeziz + Precision to Blur look unbelievable - it also got the new and updated upper, which enhances your grip on the ball. And that's why it got that blurry multicoloured thing going on, on the upper.

Besides the enhanced grip, the Nemeziz Precision to Blur also has the laceless upper, based on the revolutionizing adidas Tension Tape, that offers superior support and touch on the ball. The soleplate features the Torsion System technology, which helps you when making sharp twists and turns. This Nemeziz is definitely one the sickest colourways we’ve seen in a long time!

A classic colourway with a twist

Now we’ll focus on the Copa. The Copa Precision to Blur is a bit more down to earth, than the two other silos, we’ve focused on so far. The Precision to Blur brings the colours black and orange to the Copa. The boot is mainly black, with most of the soleplate and upper being black. But close to the entry it starts getting orange. A classic colourway with a twist, we would say. And we like it!

The Copa 20+ Precision to Blur will like any other Copa 20+ be laceless and give you that barefoot feeling, when controlling the ball. Besides that, the upper will have the Fusionskin technology, which reduces water absorption and offers unprecedented comfort. All in all, a boot that will make you feel very comfortable.

Last but not least, we got the boot with 406 spikes. You know, what we are referring to. It’s the Predator, of course! The Predator has got a black upper, with white adidas stripes and most important of all - some amazing green details. The sock is green and so is most of the soleplate. And then it looks like the forefront of the Predator are being flooded with a light green colour. Quite a look for the deadliest boot in the world!

Even though it isn’t easy to see, the DEMONSKIN with 406 spikes still feature on the Predator 20+ Precision to Blur. And the seamless sock-like upper, that is made from Primeknit, which gives you a snug fit, when wearing the boots, will also feature on the new Pred'. The hybrid stud configuration, for increased traction and full rotation and speedy acceleration, is also to be found on the stunning Predator 20+ Precision to Blur.

Precision to Blur is truly one of the most outstanding and bold packs from our friends at adidas. And only a pack this crazy would be able to unite precision and blurriness. And we love it! If you love it too, then you are pretty lucky. Because thankfully we are already able to offer you this boot, as one of the few retailers in the whole world. That means you can get the boots before everyone else. Isn’t that awesome?!

So if you love it too, then click here to explore Precision to Blur and get the boots before everyone else!