The start of the coming season is edging ever closer and we are finally within touching distance. We have taken a look at what the professionals are wearing. Here we have observed a couple of interesting colourway choices, an old classic and the Hypervenoms continued march onto the big scene. 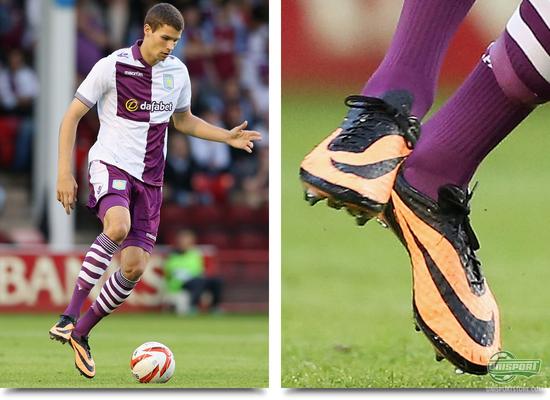 Nicklas Helenius (Aston Villa)  Nike Hypervenom Phantom Bright Citrus/Black Unisport being danish, we sometimes can't help not being a little bias. Therefore we kick off this round of boot spots with the tall Dane, Nicklas Helenius, who is continuing his English adventure in Aston Villa. He had begun his time with the claret and blue wearing the Nike Mercurial Vapor IX, but now he seems to have gotten a taste for the unpredictable and is now playing in the Nike Hypervenom Phantom. 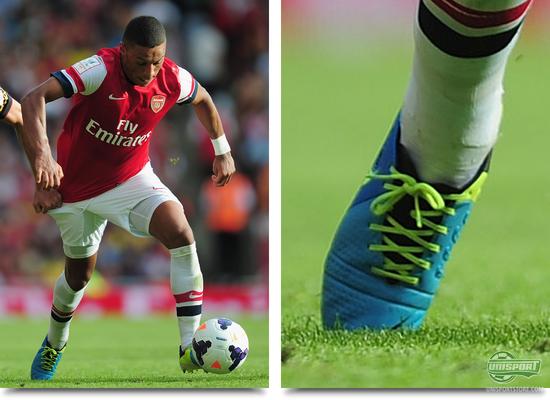 Alex Oxlade-Chamberlain (Arsenal)  Nike CTR360 Maestri III Current Blue/Black-Volt From a young Dane seemingly loving his Hypervenom, to a similarly young Englishman, who was poised for a switch to them, but can't seem to let his old boots go. Arsenals Alex Oxlade-Chamberlain has on several occasions been seen wearing the Hypervenom, but in this weekends Emirates-cup games, he wore his trusted Nike CTR360 Maestri III Current Blue/Black-Volt, which he also trained in ahead of The Gunners playing against Napoli and Galatasaray. What The Ox will end up wearing will be exciting to see. 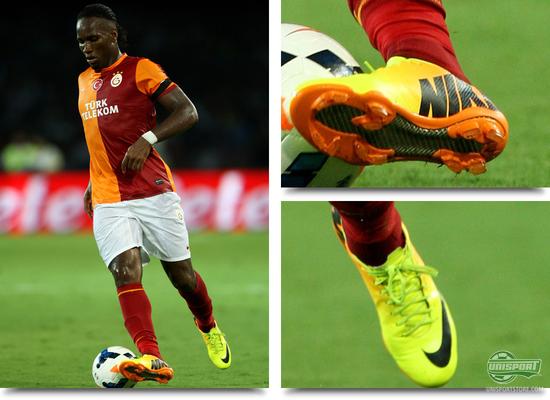 Didier Drogba (Galatasaray)  Nike Mercurial Vapor IX Volt/Black-Bright Citrus This weekends Emirates Cup also saw the return of a familiar face to English pitches. Didier Drogba seemed to feel at home and scored a couple of brilliant goals, proving that he has still got it, at the tender age of 35. In the game against Napoli he wore the Nike Mercurial Vapor IX Volt/Black-Bright Citrus, but it had a twist to it. He had a specially made sole, with fibreglass and Vapor SL studs. However in the game against Arsenal he again wore a boot with SL studs, but this time with a carbonfibre sole. Drogba also has the boots completely specially made with a different last, when compared to the standard V12 last, which the Vapor IX is made with. Instead he has the old and much wider G69-last, with increased space in the toe-box. 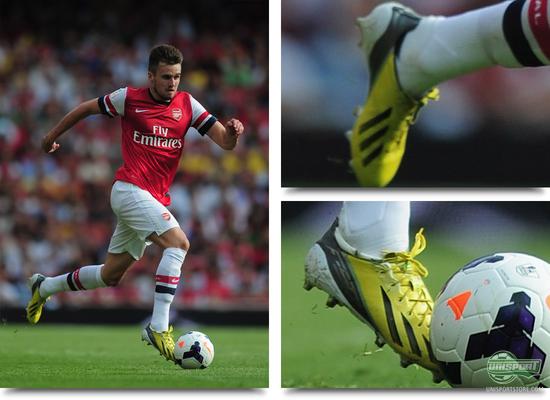 Carl Jenkinson (Arsenal)  Adidas F50 Adizero Yellow/Black In the Emirates Cup, the young Carl Jenkinson, didn't have his proudest moment, when he failed to clear the ball with his head, which resulted in Napoli's first goal. The feet are however still fine, regardless of his heads slight misjudgment. He is usually known for having extra radical designed boots, but this weekend he wore the relatively calm yellow Adidas F50 Adizero. He is usually a big fan of wearing self made MiAdidas boots. 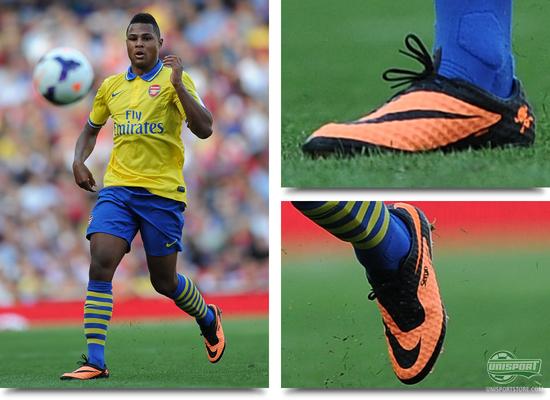 Sergio Gnabry (Arsenal)  Nike Hypervenom Phantom Bright Citrus/Black It was not Carl Jenkinson alone, who had a bad weekend. Arsenal hardly got the best warm up for the new Premier League season, as they scraped to a 2-2 draw with Napoli and were convincingly beaten 2-1 by Galatasaray. Some silver lining for Gunners supporters, albeit feint, was that they got to see the German talent, Serio Gnabry in action on the wing. He showed great promise, especially when considering he has only just turned 18. It will be exciting to see if he will get much game time this season and if we do, it will be in unpredictable fashion, as he will wear the Nike Hypervenom. 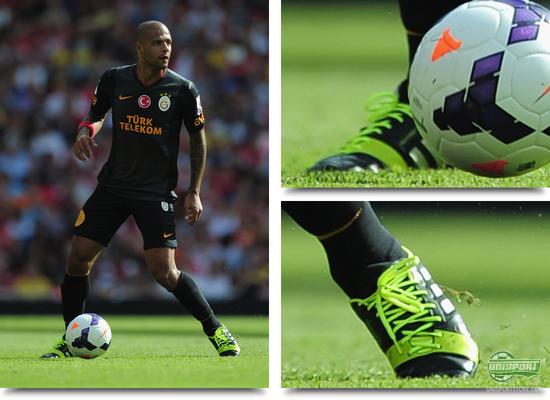 Felipe Melo (Galatasaray)  Adidas Nitrocharge 1.0 Black/Electricity/Silver It is impossible to say, whether Melo was just looking for a pair of boots to match Gala's black away kit. But the Brazilian midfield fighter Filipe Melo wore a pair of Adidas Nitrocharge 1.0 Black/Electricity/Silver against Arsenal in the Emirates-cup. It is rare we see the pro's in this colourway, but no matter the colour of the boot, we are sure Melo fits TheEngine-bill very well. 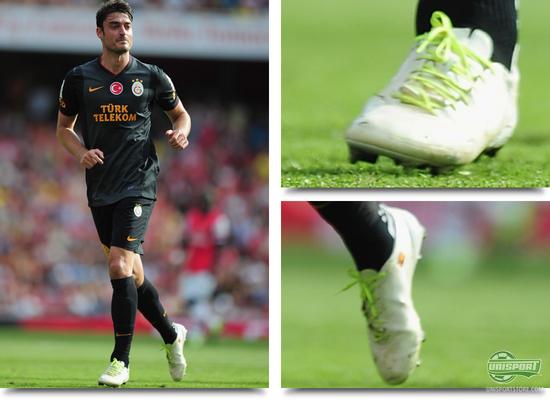 Albert Riera (Galatasaray)  Adidas F50 Adizero Whiteout The last spot from this weekends Emirates-cup will be at the feet of the Spanish Albert Riera. In the game against Arsenal we spotted him wearing an Adidas F50 Adizero whiteout. The interesting thing with this spot is that this is not the standard Adizero whiteout from the third generation, which had distinct blue studs. This whiteout seems to have been created with MiAdidas, as the boot is fourth generation and without Sprintweb across the instep. 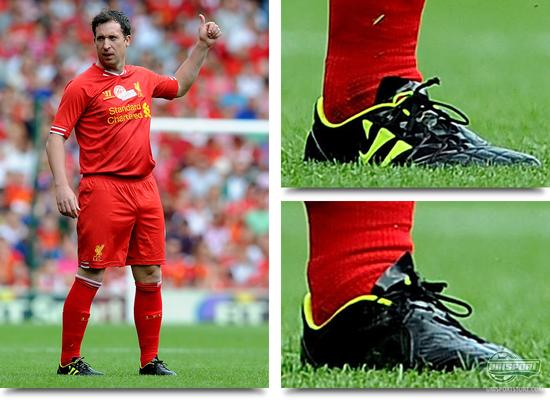 Robbie Fowler (Liverpool-testimonial)  Warrior Sports Gambler Black/Neon In the weekend there was also a testimonial game for Steven Gerrard, where an enhanced Liverpool side took on Olympiakos. Wearing the number 9 shirt, was club legend Robbie Fowler, who looks to have been enjoying himself after putting his career on the shelf. It definitely wasn't an SL-version of Fowler, who took to the pitch. It was definitely interesting seeing Robbie in his Warrior Sports Gambler boots and nostalgic for Liverpool fans seeing him in action again. 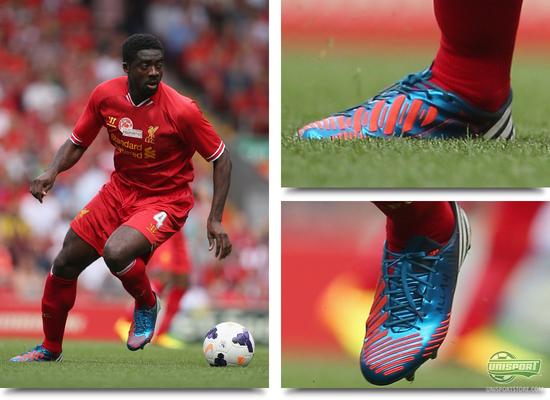 Kolo Touré (Liverpool)  Adidas Predator LZ Blue/Red We stay in Merseyside, where Kolo Touré was wearing a pair of Adidas Predator LZ. It is notable that he is wearing the first version of the Predator LZ, rather than the new LZ II. Maybe he has a special soft spot for this boot, where he has also embroidery with Allahs name on it, which naturally is because he is a devoted Muslim. 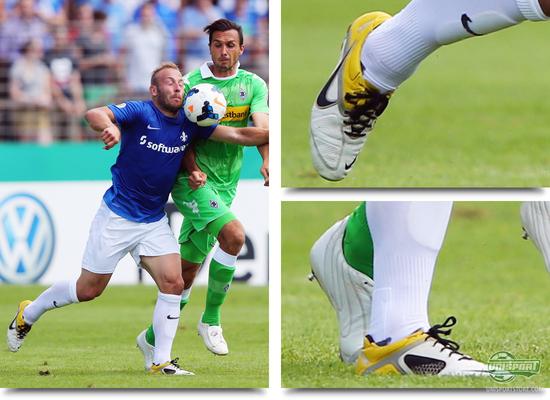 Marco Sailer (Darmstadt 98)  Nike CTR360 Maestri II White/Black-Tour Yellow You don't usually hear much about Marco Sailer, or the club Darmstadt 98, who play in the third best German tier, but Marco Sailer's boot choice still caught our attention. In the game against Borussia Mönchengladbach Marco Sailer wore an old version of the Nike CTR360 Maestri II. Also worthy of note is that his opponent Martin Stranzl is wearing a pair of Pelé Sports 1970. The Pelé Sports boot is their version of Nomis The Glove, which the boot is based on, since Pele Sports bought the Australian brand. Quite an interesting duel you have to say. 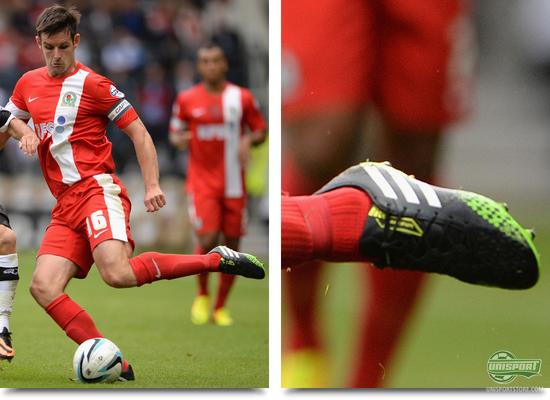 Scott Dan (Blackburn)  Adidas Predator LZ II Black/Green When we get to see the cool Adidas Predator LZ II on the professionals feet, then it is usually the Electricity Green colourway we get to see. It is rare that we spot the black/Green colourway, but that is none the less what Scott Dan from Blackburn had chosen to wear. It looks like the Englishman has made his choice, but what about you? Colourful, or classic? 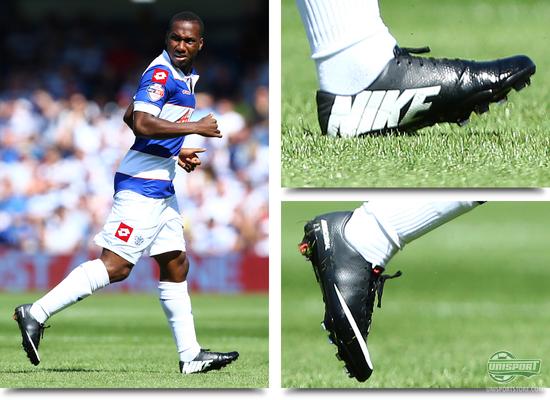 Junior Hoilett (Queens Park Rangers)  Nike Mercurial Vapor IX (Speed Control) Stealth-Pack One man who is probably quite happy with the introduction of the Nike Stealth-Pack, is Junior Hoilett from QPR, who last season played in a blackout version of the Vapor. Now he won't have to pull out the ink whenever he needs black boots, as the new Vapor IX is far more subdued. 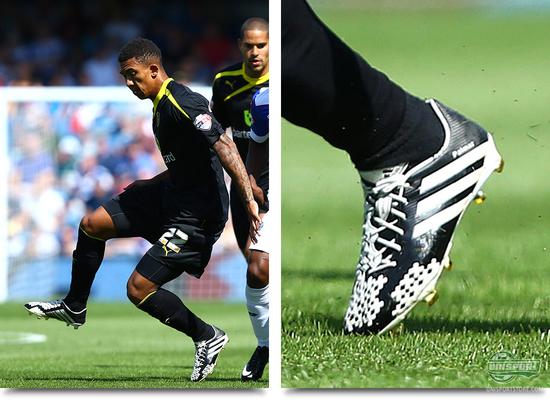 Liam Palmer (Sheffield Wednesday)  Adidas Predator LZ Black/White MiAdidas The good Liam Palmer is known to most boot spotters as a man to watch, as he is never shy of showing off a new pair of boots. Here Mr. Palmer has been busy with MiAdidas and has made the new Predator LZ II in his own Black and white colourway. Should Adidas look to copy this colourway?

This weeks boot spots has a little of everthing, ranging from the new Nike Hypervenom, to an old version of the Maestri. What do you say to the spots? Have you seen something we missed? As always would love to hear from you in the comment-section down below, or on Facebook and Twitter.